Frenetic gypsy punk band Gogol Bordello have a reputation for raucous shows and highly energetic performances. As eager fans and wanting nothing more than to test this out, we make our way to the O2 Academy in Leeds to see them in the midst of their latest tour promoting their latest album ‘Pura Vida Conspiracy’. 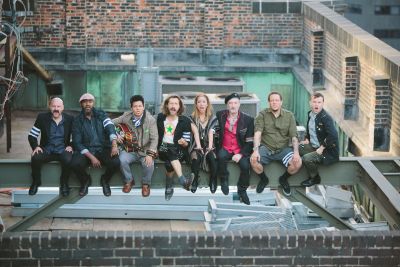 First, however, comes their support act ‘Man Man’, whose experimental rock and could be seen as an odd choice, but seeing them on stage it becomes eminently clear why they make for perfect preparation for the main act. Full of energy and playing a set packed with opportunity to let loose as the guys, dressed in skeleton onesies, jump and bounce around stage loving every moment, all the while ensuring that we do too.

Having thoroughly enjoyed ourselves, the wait for the main attraction is made a lot easier to endure and when lead vocalist Eugene Hutz and company finally make their appearance and burst on to the stage with a powerful rendition of new album opener ‘We Rise Again’ that already serves to have the crowd jumping frantically, the band’s enthusiastic style certainly rubbing off on us. The set consists largely of a mixture of songs from their most recent two albums, with ‘Pura Vida Conspiracy’ naturally getting a lot of love, and the band’s magnum opus in this writer’s eyes, ‘Trans-Continental Hustle’ also featuring regularly, with crowd-pleasers like ‘Immigraniada’ and ‘My Companjera’ blasted out flawlessly, the crowd moving relentlessly all the while.

About half way through the show the less fit in the audience (which includes us) begin to flag, but the band certainly don’t and they treat us to song after song of unabashed gypsy-punk that encapsulates the uniqueness of their sound, even amidst a genre that’s crammed with similar acts. Fantastic at convincing you that you’ve got a few more jumps left in you, or that you can enter that circle pit just one last time, Hutz and co never relent as he, wine bottle in hand, leads proceedings with an effortless charm and unrelenting energy. Going crazy for a whole two hours or so may be verging on physically painful, but it’s definitely worth it when a show as good as this one rolls in to town.