We take a look back at the UK’s premier alternative-electronic festival which featured the likes of Nachtmahr, Project Pitchfork, Ayria and Concrete Lung in 2010… 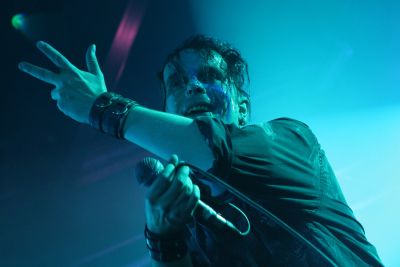 Declaring itself to be “The Greatest Show On Earth”, Infest 2010 kicked off with Mandro1d, their phasers most definitely set to fun. Delivering big on the silliness quotient they launch into a lunatic mash-up of retro nostalgia and EBM craziness that, quite literally, gets the party started. It’s a toss up between the Bryan Adams cover, ‘The Summer Of 6.9‘, and their own ‘Robot Toaster Malfunction‘ for their greatest moment of absurdist genius, but you’ve got to give extra points to any band that can get a crowd singing along to the words; ‘Heroin! Bumsex! Sausages‘ really, haven’t you?

Heimstatt Yipotash came next, the “live” element of their act represented by two fellas (Heimstatt and Yipotash presumably) bobbing about. somewhat disconcertingly, behind a table. However, if you close your eyes (or blind yourself by rubbing whatever-the-heck liquid they put in glow sticks in your eyes) then the performance takes on a whole new dimension as complex sounds and rhythms wrap themselves around each other, resulting in quite a powerfully seductive, hypnotic effect on the listener.

Bringing the live element of Friday night to a close were De/Vision, who are harmless enough that your mum (or your gran) could easily enjoy their smooth synthpop sound. There’s only two of ’em onstage in classic Soft Cell formation (one guy singing, one guy tucked away behind a keyboard), but they kick out an emotive set that, whilst low on actual intensity, draws you in with its infectious, melodic bliss and owes an unmistakable debt to some of Depeche Mode’s finest moments.

Matt and Sarah of Northern Kind cite such eighties legends as Yazoo, Soft Cell and Madonna amongst their influences, but the Sheffield duo seemed reasonably conventional, lacking the pizzazz the aforementioned eighties icons may have bestowed upon them. Their performance was more chart synthpop than perhaps the representative Infest punter would prefer but there was a degree of swaying going on in the crowd so they didn’t entirely go down badly, particularly given that they had the early 4pm slot. It was quite an easygoing start to the night ahead.

We were really looking forward to being lifted off into outer space by the sci-fi themed electro-industrial act Memmaker, as were the masses of people who turned up early in the evening to see these guys get their stomp on. Guillaume and Yann threw as many shapes as the crowd did. The audience clearly appreciated the more up-tempo brain-rattling beats than the previous act offered & to us this marks the beginning of the festival. Memmaker also provided us with the first of a few guest appearances on the Infest stage this weekend, in the shape of Jamie from rhythmic noise act ESA. The addition of Jamie’s live vocals on “Robot Buzz” lent a little something other than the standard blokes with laptops format to their act; a change from the norm is never a bad thing. Suffice it to say, after that roof-raising performance, we’re pretty confident Memmaker would be more than welcome at Infest in the future. 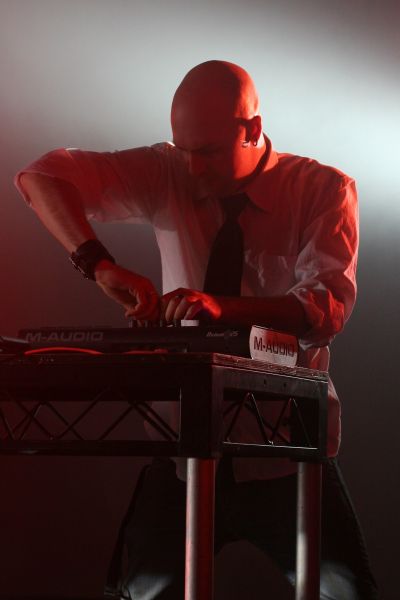 Agonoize took to the stage slightly earlier than scheduled due to Parralox being out of action, which, in the instance, we’re not wholly sure was a good thing. The German aggrotech outfit delivered a set which was pretty bog-standard and nothing out of the ordinary for this sub-genre of industrial. Snarling gravelly vocals? Check. Anger by the bucketload? Check. Fake blood? Check. Though, to be fair, they did have way more of this than most. There was a fair amount of theatrics with their show, with front man Chris L. slashing at himself with a slightly comedy looking rubber knife. The resulting blood showered the front of the crowd meaning some of the cybergoths weren’t best pleased, though most seemed to positively lap it up. Theatrical or not, Agonoize seemed unable to hold the attention of the audience for their entire set and lost half the crowd to the bar.

X-Rx was the only band over weekend that really made me wish I’d brought my mp3 player. Cyrex, being the main man of the outfit, along with Sine-X (live support) did little throughout their slot other than posing and having conversations over their laptops, making little effort to even appear as though they were playing anything live. We were not alone in feeling a bit bored as some of the audience also seem to be wilting (the melting point seemed to be approximately five tracks in), though some people really enjoyed the stomp-by-numbers hard dance vibe X-Rx had going…for some reason.

This was the point in the evening were we felt a little glad there had been a Parralox-shaped hole left in the schedule (sorry, it’s nothing personal). Having never had the pleasure of seeing Rotersand play in the flesh before we had high hopes and thankfully they didn’t let us down. The band themselves were funny, engaging and also exquisitely camp, which made for a pliable audience they could whip up in to a frenzy and transport to some rather special, exhilarating places people usually only go whilst high on illegal substances.

We were not only treated to some new material, but also reworked versions of favourites such as ‘Waiting To Be Born‘. We had a slight moment of dread that these versions would not pan out but needn’t have worried, they weren’t just reworked, they were merely enhanced.

Frequently, we felt goosebumps in response to the superb soaring club beats, beset with a definite whiff of pop and some prog-rock guitar riffs that scream Pink Floyd, an unusual combination yes but they carried it off with finesse. Rotersand put everything they had into their performance, and this scribe for one massively appreciated a band who not only gave some outstanding live vocals and synths, but also some magnificently played guitar which in our book is an automatic “hell yeah”. Charismatic frontman Rasc completely shredded his shirt dancing so enthusiastically; if that doesn’t deserve a 10/10 for effort then we don’t know what does? 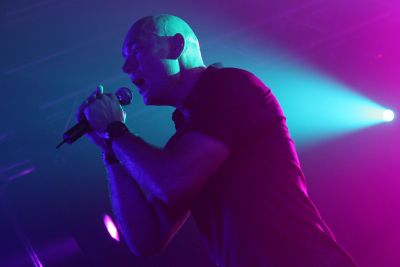 A last minute addition to this day’s bill were Parralox, who were unfortunate enough to miss their set the previous day due to singer Amii being rushed to hospital. Luckily there appears to be no permanent damage as they zipped through a set heavily influenced by the 80’s Synthpop wave, providing a gentle start to the last day of Infest where folk are starting to feel a little fragile from the fun (and possible excess) of the previous two days.

Concrete Lung can comfortably claim the accolade of ‘Noisiest Band At Infest’ – their 30- minute set packing in their debut EP in its entirety, ostensibly offering a phosphorus bright vision of hell, At the end of their set they’re joined by Je$us Loves Amerika‘s Patrick Dougan for a grindingly monolithic ‘Waste Of Flesh‘, scabborously dedicated to the English Defence League whose appearance elsewhere in Bradford on the Saturday has been the only cloud over this weekend’s proceedings.

Sonic architects Pattenbrigade: Wolff design music for pylons, apparently. A bit daft that, creating music for an unappreciative inanimate object, but there you go. Visually they’re a cross between Lego workmen and KMFDM’s Sascha crossbred with one of the Village People, and they perform in front of a backdrop showing Cold War-era films celebrating the joys of Socialist construction. And whilst they’re one of the more visually stimulating bands of the weekend, their sound is equally impressive; a beguiling combination of Kraftwerk-style sonic architecture and, when they finally wheeled out their female vocalist a couple of tunes in, a grown-up Swarf.

Canadian Jennifer Parkin’s solo project Ayria explode on to the Infest stage on Sunday evening and boldly engulfed the venue in her own brand of bubblegum pink electropop. Jennifer seemed incapable of standing still for a nanosecond; she jumped around the stage with seemingly endless amounts of childlike enthusiasm, which quickly infected the already excitable crowd. This show wasn’t for everyone however, as some could quite easily sicken of the bubbly saccharine-crammed electro tunes. The tracks also lacked any distinct variation between them and may have resulted in punters having difficulty telling between one track and the next. The vocals sounded fairly nasal and undeveloped, which may not sound like a positive criticism, but it did seem to fit pretty well with the youthful & lively style of this act. However, the one track which did stand out was one of Ayria’s most famous numbers, ‘The Gun Song‘, providing a noticeably lovely moment between artist and audience when she had many Infest-goers chanting the chorus alongside her. Injecting a frisky, fun and carefree attitude into Infest, Ayria’s infectious enthusiasm, friendliness and warmth towards her loyal fanbase is certainly something to be commended. 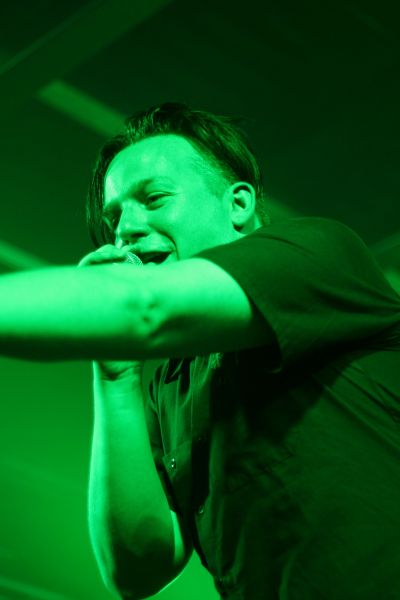 Perhaps the most anticipated band of the weekend, Nachtmahr lay siege to Infest with the battle cry of “Are you ready for war on the dancefloor?” Anyone that caught their brief UK tour at the tail end of 2009 will be pleasantly surprised at how their live show has come on in recent times. Abandoning the ‘two geezers behind Macs’ aesthetic for a more dynamic show, now Thomas Rainer interacts fully with the crowd, their live drummer (in the form of Kommand+Kontrol frontman Terminal) flanked by zwei frauleins in full Nachtmahr regalia to bolster their visual arsenal. It’s potent imagery, though perhaps a little too politically ambiguous given the mini race riot that occurred only the day before. Effectively Nachtmahr are Combichrist in military garb (or, as And One would probably describe it, “a military fashion show…”), and the ensuing sonic blitzkrieg does indeed lay waste to the dancefloor, an effect which is only compounded when Uberbyte’s vocalist Uberman bounds on stage for a pulverising ‘I Believe In Blood’. Good scheisse as they say on the Rhine.

In town to promote their new CD, ‘Continuum Ride’, Project Pitchfork take to the Infest stage as the consummate professionals they undoubtedly are. Vocalist Peter Spilles knows how to work a crowd, and here he froths the Infest faithful into a frenzy. It’s a marvel to behold and you sense that Pitchfork are actually having more fun than the crowd who, in turn, are already soaring well above cloud nine. As they near the end of their set an impromptu appearance onstage by a nude Mike Wimer (of Ayria / Noxious Emotion fame), Infest finally makes good on their many promises of hot action (we jest), before modesty gets the better of Wimer and he tries to hide behind Pitchfork‘s keyboardist. It’s a blinder of a set that provides a happy finish and more besides for Infest 2010, which goes well beyond the scope of your everyday gig and is not only a celebration of the music but effectively a counter-culture utopia. Bring on Infest 2011.