“I want to love-hate you! I smash your heads so that blood squirts over your blond hair! Is this okay for you?” says Deathstars‘ Whiplasher Bernadotte before a chorus of screams…more on that later. Before this can happen, Dope Stars Inc. from Rome have hard work to build up the heat as they are the opener of the fiesta… 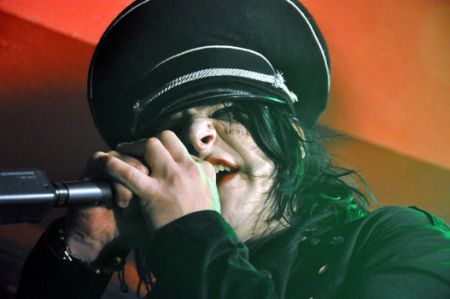 Punctually at 7 pm. the Romans charge the stage. There has been a lot of promotion for this Italian combo so that’s why the hall already is pretty full of guests. Victor Love (with some big sunglasses on) screams out his soul, and his troop help him fiercely to make the stars glitter and to spin the breathless party rock into the celebrating audience. The band rock it wildly for half an hour without any break to relax. The performance shows that they can create some space in between the stamping rhythm and the attacks of roaring strings for more variety and to give contrast and depth.

To this effect the following Lacrimas Profundere means an enhancement. They call poses and a wild show the mother of performance. The band looks back on a lot of experience and knows how to slaughter 45 minutes, not only to present satisfaction and fun to their fans but even to convince somebody, who isn’t primarily interested into their music. They do it really well and are strong throughout. 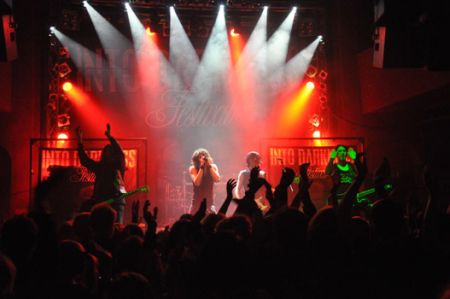 Most seem to have waited for Deathstars. You might love or hate them – live they are killers. They have one hour, and in this time they rock the stage as if it would be the last time in their life. The singer interrupts from time to time with dark, sonorous tales that give some rest to his band and holes of silence so the bursting music sounds more tremendous. They are able to build up a bow of excitement from the beginning on to the foaming end and shoot more than enough adrenalin into the people. 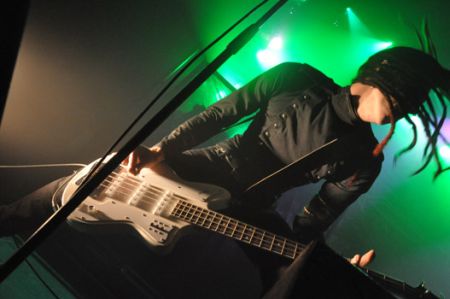 After this the Diary Of Dreams, who are – as is well known – at home in smaller venues, could have been in a difficult position to finish the festival. In fact, many guests already leave the room; it becomes calmer. Instead of raging show-rockers, the gloomy sound of Adrian Hates starts to float in the air, he’s accompanied by guitarist Gaun:A who stays under the limelight. In the background nearly unseen are the drummer and keyboard player. An enormous difference compared with the spectacle before that came before, but it’s so effective! In the beginning especially reserved, Hates he tries to pull the Deathstars hypnotised audience into his own world – and it works. The dark intensity lures the guests; the hall gets filled again. After some tracks from his new album Adrian unstraps his guitar, because now he offers the more driving, electronic songs which blow away the melancholy and push movement into the people, who start to dance again, to cheer and to ask for several encores. A really great show. 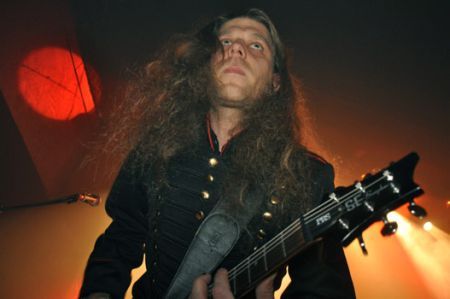