The stage is furnished with numerous synthesisers connected to various boxes – evidence that this evening’s gig pays homage to pioneering figures of electronic music. 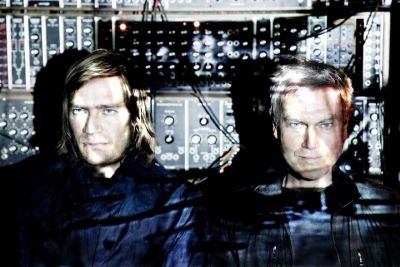 Before one influential artist appears, support act Tara Busch captivates the crowd with songs built around her impressive vocal capabilities (if you don’t believe us, there’s a YouTube video where she shatters glass with her voice) and the often-manipulated notes she plays on her Moog synthesiser.

The accompaniment of flute and cymbal don’t distract from the electronic elements of the sound, but enhance the ethereal mood. She introduces the stripped-down piano chords of ‘We Can See Mars’ by adding “I thought I’d do this one as it’s creepy.” Evocative elements in her set range from tinderbox chimes to vocoder-esque melismas.

With each song, Busch recalls a litany of female artists in her musicianship: reflections of Tori Amos, Laurie Anderson, Alison Goldfrapp, Liz Fraser and (inevitably) Kate Bush. The fact she focuses on her music adds an enchanting enigma to her beautiful five-song set.

Soon enough, John Foxx and the Maths take to the stage. Foxx and Benge, the figureheads of the project, are accompanied by two female keyboardists; one of whom also plays violin (the only non-synthesised instrument used in the eighteen-song set) and the other performs bass.

The tracklist includes songs from his period as Ultravox’s frontman (‘Rockwrok’, ‘Dislocation’), his solo career and the project’s critically-acclaimed ‘Interplay’ album. These modern tracks, from show-opener ‘Shatterproof’ to ‘Summerland’, are as cherished by the audience as the Foxx back catalogue.

While the general rhythms are classic New Wave synthesia, the band’s sound is truly post-modern at times. The stripped down sound of ‘Just For A Moment’ fuses violin phrases and responding synth stabs, offering an interpretation which belittles the track’s age of 33 years.

The industrial noises in the outro to ‘Watching The Building On Fire’ and the barren passages of ‘Dislocation’ makes one appreciate the foundations Foxx has laid for the evolution of British electronic music. Like Busch, he and his stagemates concentrate on the performance yet still gains the audience’s appreciation as the stop-start rhythm of ‘Rockwrok’ causes feet to start shuffling.

The reverential audience are vociferous in their calls for an encore, and are subsequently emphatic in their appreciation when Foxx and the band return to the stage, rounding off a warmly appreciated set with ‘The Good Shadow’ and ‘Underpass’.

The performances by John Foxx and the Maths and Tara Busch complement each other by simultaneously performing and eulogising the electronic music which inspires them as artists, and in turn, motivates scores of budding musicians to follow in their path.