A bank holiday weekend is always a prime time for a music festival, and Live At Leeds has, in its history, become a respectable magnet for mainstream artists. 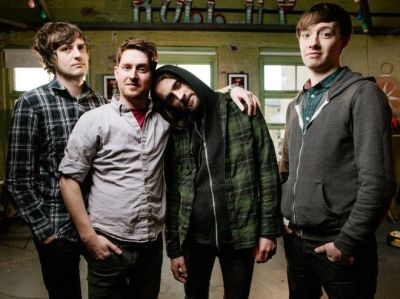 This year’s programme of performances includes Ladyhawke and The Subways – and an ample stage for the wealth of talent the Yorkshire metropolis and its surrounding areas is producing.

The festival’s first day plays host to “the unconference”, held at a creative arts complex in the city’s Quarry Bank district. Described by organisers as “a forum for networking with industry experts”, delegates and speakers representing a comprehensive gamut of music are here to exchange opinions on the current state of music and its potential.

It’s the third year this element of Live At Leeds is being held, and curator for the day, Whiskas (ex-Forward Russia, now-Honour Before Glory), points out the key role interaction plays today: “We’ve got this Tweet wall, so we can see the feedback live as it’s happening.” And it’s not just in the virtual sphere that’s been enhanced this year, as Whiskas explains: “We’ve got solid guests and very concise panels… we’ve also pulled it apart with a lot more networking space and a lot more talls, it’s something we’ve not really done before.”

The day’s keynote speech is delivered by broadcaster and sometime-musician Tom Robinson and centres on how “the good old days are over…” as “…genuine talent now has the best chance of being heard.” Citing how possessing talent is now of equal importance as self-belief and persistence to sustain a career in the music industry, Robinson muses; “The key to quality is quantity… write a huge number of awful songs and you will write more freely and take more risks.”

Further open discussions concentrate on using digital platforms more effectively as a promotional tool, as well as face-to-face talk on topics ranging from chasing funding for live events to selecting the most effective agent. Following the exchange of thoughts, through music and words, LeeSun, a Hawaiian-born singer-songwriter who lives in Leeds, tells us she has found the day inspiring: “It’s been amazing; it’s exceed my expectations by a long way.”

It’s the main day of the festival, as ticketholders collect their all-day passes for a jam-packed schedule encompassing over 150 acts at 11 venues located citywide. Stationed outside the wristband exchange is the ELFM tent, showcasing the cream of the city’s young talent alongside their broadcast hub, “the caravan of love”. Rounding off their set as we arrive are The Artists. With each place of performance scattered around Leeds city centre, today’s game is one of chance, and we are hedging our early bets at The Cockpit. The pulsing rhythms of I Call Shotgun drift from the intimate surrounding of Room 3 upstairs as local quartet Richard Parker herald an increasing brace of spectators in another part of the building, where their blissful instrumental pieces create a winning atmospheric score.

Another early attraction at The Cockpit is Black Moth, who instantly get heads banging with a barrage of tracks from their just-released and highly-acclaimed début album. “It’s lovely to be here”, lead singer Harriet Hyde greets the appreciative crowd.

Venturing between the various locations as the day goes on, music is to be found bursting out of any possible edifice; buskers in Briggate, cars passing on Cleveley Street and taverns on The Headrow resonate with sound as we make our way to our next port-of-call – the Academy – for I Like Trains‘ set. All kitted out in black T-shirts and skinny jeans, an enthusiastic cheer rings out in the arena as the band share songs from new LP ‘The Shallows’; the new material warmly embraced by all in the room. Another dash across town transports us to the home of arguably the most kinetic sounds of the day. Crossing the threshold of The Well brings forth a profound buzz among Bears Killing Bears‘ soundcheck; their relentless thrash is relished by a full-to-capacity audience who are entranced by the spectacular stage energy the Leeds quartet serve up in spades. The breakneck rhythms continue when Halifax’s Wot Gorilla embark on a thrilling, unpredicatble journey which veers between pacy moments and more pedestrian grooves.

Time for another change of venue, and the University of Leeds’ Students Union is our target for A Plastic Rose, four lads who have flown over from Belfast to fill a last-minute vacancy. Their offer of tight melodies with screaming choruses, chugging chords and blistering breakdowns draw an increasingly supportive ear. Guitarist Ger throws down the gauntlet by telling the audience, “I’m gonna get you bastards clappin’ along to one of our songs” – by closing number, ‘Oceans’, the crowd happily reciprocate.

We’re then en route back to The Well as we momentarily pass the pleasant-sounding ‘Love Disguised As Sex’ by Death At Sea, and on reaching our destination, we catch the tail-end of Royal Republic‘s set as a moshpit springs to life during the Swedes’ powerhouse performance of ‘Space Machine’. Hawk Eyes (pictured) quickly follow with a platter of new tracks from the ‘Ideas’ album and fan-favourites such as ‘Kiss This’, which stir a more intense moshpit on the floor. Their swansong sees lead singer Paul taking his mic stand into the crowd, which is lapped up by the moshers like a saucer of fresh chilled milk.

At this point, we take our leave, tired from our trekking yet wholly satisfied at the palette of performances we’ve taken in. It’s clear the thousands of spectators who’ve been a part of Live at Leeds 2012 feel the same.

An athletic element is instilled on the last day of the long weekend – a five-a-side football tournament at an indoor sports complex. With 32 teams competing among eight qualifying pools, this year’s kickabout – the second in the festival’s history – is in aid of Sport Relief. A dedicated crowd are present to cheer on every team, and any notions of missing Chelsea’s victory in a more prestigious tournament for an equally epic day of live music two days previously aren’t evident.

Progressing to the second knockout stage are teams representing bands, venues, labels and academic institutions – sixteen eventually whittled down to eight spaces for the quarter finals. Semi-final status is soon sealed for the squads who represent The Cockpit, Futuresound, Straight Up and Redwire – the latter two go on to make the final, bidding to join last year’s champions The Pigeon Detectives in the annals of Live at Leeds infamy.

Sadly, Bradford quintet Redwire, kitted on in their native city’s amber and maroon strip, have victory snatched from them at the last minute by a late goal from the Straight Up podcast collective, regailed in blue shirts with white pinstripes. The final score: two-one, wrapping up the Live at Leeds 2012 experience.

More details on the other bands featuring at Live at Leeds 2012 can be found on the festival website.