“So, this is Manchester… you’re telling me.” The heavens open up above our heads on the way to the Mancunian’s homecoming gig. 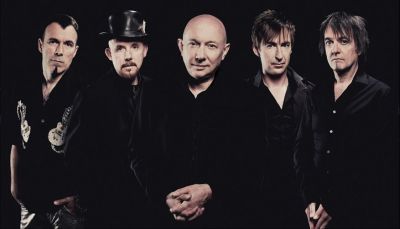 Opening act In Fear Of Olive get the crowd warmed up nicely with their Americana-flavoured rock. They get a few heads swaying and give a good account of themselves in front of the early Magazine fans before them.

Cometh the hour, cometh the men. Magazine take to the stage and immediately start up the intro to one of their classic tracks ‘Definitive Gaze’, with the synth textures of Dave Formula massaging the band into the gig proper. Meanwhile, frontman Howard Devoto is prowling in the wings somewhere. It’s a good minute into the song before he creeps onto the stage to deliver his statement to the audience: “So this is real life, you’re telling me, and everything is where it ought to be.”

After the slo-mo JFK assassination-inspired ‘Motorcade’ and its delightful stop start film noir vibe, the band take it up a gear with ‘A Song From Under The Floorboards’ a little later in the set – its trademark arpeggiated riff piercing through the air. The track, covered by Morrissey and Jarvis Cocker on their solo tours, is the first tune to get the crowd really rocking in their shoes.

What follows is a serenely beautiful version of their tune ‘Parade’, all tinkling keyboards and dramatic pauses. It has probably one of the best piano melodies committed to record – tonight, Howard sings that the service is “so-so” when it used to be “very, very good”; a great little touch to change the lyrics around for the live show and maybe reflecting his state of mind.

The song ‘Philadelphia’ gives its alien space funk a welcome airing, given a great stop start treatment by Noko on Guitar playing one of John McGeoch’s finest riffs in his time in the band. A cover of ‘Thank You (Falettinme Be Mice Elf Agin)’ by Sly And The Family Stone showcases Dave Formula’s excellent Hammond organ playing. His fingers gently mangle the keys, and he ends the tune on a great organ swell and sweep of the keys, in perfect time with John Doyle at the finish.

Out of the new album tracks, ‘Holy Dotage’ is a favourite in its live incarnation; it’s as propulsive as the classic ‘Shot By Both Sides’, but retains enough originality to become its own beast. Noko certainly shines on this track; his solo in the middle eight is something to behold with his fingers snaking up to the top of the fret board until you think they are going to fall off the other side. Next comes one of their signature tunes ‘Permafrost,’ an eerie rock tune apparently about ‘bad sex’ which Devoto thinks might be “too early for” amid chuckles in the audience.

There are two encores; ‘Physics’, then a rip roaring version of ‘Shot By Both Sides’ which really gets bodies jumping up and down at the front

of the stage. Noko enthusiastically bounces around the stage wielding his guitar looking like a cool version of Ming the Merciless out of ‘Flash Gordon’.

Overall, it’s a great gig. Stan White has the unenviable task of stepping into Barry Adamson’s shoes on bass, but manages to pull it off, and John Doyle and Dave Formula were on top form. Devoto was a bit Bob Dylan-esque at the beginning of the set, waving placards around with snippets of lyrics and mysterious sayings which added an extra element to his kinetic stage craft. He really looks like he enjoys himself on stage now more than ever and can be seen waving his hands theatrically and jumping around when the moment takes him.

It’s hard not to enjoy seeing an old punk rock icon throwing himself around the stage nearing the age of 60. He certainly puts many front men half his age to shame and its an enjoyable spectacle to watch. I’m looking forward to seeing what happens next with this Magazine line up, and I

hope they continue to make new music and show audiences what they can do with it.

More information on Magazine is available on the Wire Sound website.