It’s been a long time since Napalm Death toured their home country and even longer since a headline run, so that in itself makes tonight something of an event in the metal calendar. That the tour is a sequel of sorts to their legendary 1992 Campaign for Musical Destruction run featuring a stellar bill of some of the most ravenous heavy bands today makes this even more essential. 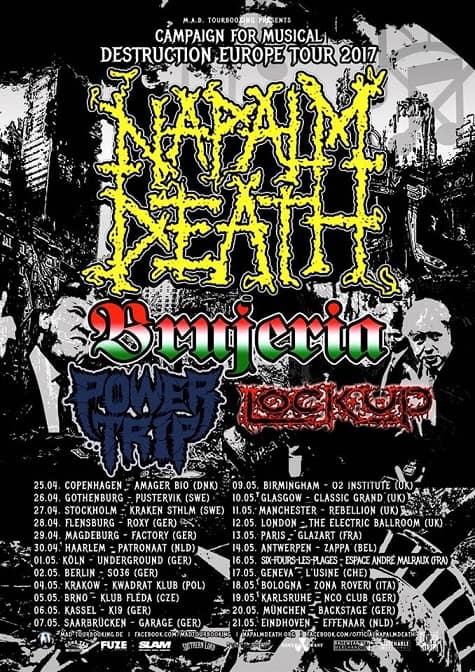 When the opening band on the bill is a supergroup you know you’re in for a memorable evening. Extreme metal legends fill the ranks of Lock Up with ex-Cradle of Filth and Dimmu Borgir drummer Nicholas Barker and Napalm Death bassist Shane Embury (who is pulling triple duty tonight in Lock Up, Napalm and Brujeria) forming one hell of a rhythm section, and it’s fitting in a way that the night should open with another musician who also played on that original 1992 Campaign for Musical Destruction, in the form of Brutal Truth’s Kevin Sharp who recently took over vocals in Lock Up from At the Gates’ Tomas Lindberg. Sharp is on fine form, donning a Johnny Cash shirt and a cowboy hat as he screeches like a madman. He’s genuinely funny in his banter with the audience, and with his credentials he’s proven the perfect choice to replace a vocalist as distinctive as Lindberg in the band. Lock Up’s malevolent strain of grind is potent, and new album Demonization is arguably a career best with cuts like The Plague That Stalks the Darkness proving the highlights of their short set.

It is Power Trip who inject a welcome dose of young blood into this touring package, and despite having just released undeniably one of the best metal albums of the year thus far they seem genuinely surprised and humbled by the response they receive. They throw everything they have into their performance to ensure that they earn it, and the result is a revelation of sorts that this band are what has been missing from thrash metal for the last decade or so. Songs from their new album Nightmare Logic especially don’t just sound like 80s classics but often surpass them, but at the same time unlike so many younger thrash bands Power Trip are not just a time portal to the streets of the Bay Area in 1984. There’s a distinctly current edge to them, the product of more musical influences than just those archetypal thrash bands and infused with the climate and traumas of today’s world. They also actually feel dangerous and violent, songs like Crossbreaker less suited for crushing a can of beer against your head than for crushing heads beneath your boot. On a riff-writing level alone they’re on another plane, and when their breakneck speed crunches into hardcore beatdowns that feel like they’re being played with the right hand of James Hetfield, the results are destructive and glorious.

Brujeria are touring their first album in sixteen years, kicking back into action are lying dormant for such a long period. As Shane Embury, Nicholas Barker and Lock Up/Pentagram Chile guitarist Anton Reisenegger once again take to the stage, there’s a realisation that in 2017 Brujeria is literally just Lock Up with a different vocalist, but musically they’re a very different beast. If Lock Up is razor sharp laceration, then Brujeria is blunt force trauma, equipped with riffs that batter rather than tear and far more bounce in their grooves. The fact that Embury, Barker and Reisenegger nail both is testament to their musicianship and skill within a genre that doesn’t always get the credit it deserves for variation. Of course Brujeria’s vocal approach and their Mexican drug cartel aesthetic is perhaps their defining feature, their dual frontmen with bandanas over their faces angrily roaring in Spanish and brandishing machetes. Brujeria though are more bizarre than actually dangerous at times, with jarring synchronised dance moves and of course their drug-themed parody of the Macarena. On a purely musical level, they probably could’ve swapped sets with Lock Up as the latter deserved the longer set, but songs like Viva Presidente Trump! certainly prove stimulating.

In this most violent of niches though in the extreme metal underground, there is one undisputed master. Napalm Death did not just pioneer grindcore but have continued to push the boundaries of what it can be, becoming a benchmark band for what extreme acts are capable of artistically especially this far into their career. What’s immediately apparent once they walk on stage and kick into gear is how even now with so much progression in extreme metal having diversified into so many dark and twisted forms, Napalm Death remain one of the most destructive live bands on the planet. As they merge the eerie intro title track to their most recent album Apex Predator – Easy Meat with the similarly unsettling intro to the classic From Enslavement to Obliteration, the opening barrage that follows of It’s a M.A.N.S. World! into Necessary Evil threatens to annihilate the speaker system. The wall of cacophonous fury that roars forth from the stage like a tidal wave is jaw-dropping.

What is not though is one-dimensional. Tonight’s set spans Napalm Death’s thirty year discography, and the different flavours, textures and ideas they’ve played with in that time make themselves known. They unearth a few rarities from the vaults like Utopia Banished’s Christening of the Blind and the ferocious groove of Twist the Knife (Slowly) from Fear, Emptiness, Despair, and even a recent one minute blast like Smash a Single Digit has a wholly distinct feel from the blink-and-you’ll-miss-it tracks from debut Scum of which Napalm Death tear through four in about three minutes. The biggest musical departure of the night comes in the terrifying ambience and sludgy crawl of Dear Slum Landlord… from Apex Predator – Easy Meat, illustrating how Napalm Death are making some of their ambitious material ever in recent years.

Danny Herrera, perhaps one of the most underrated drummers in metal having been the machine in this engine since 1991, locks in so perfectly with Shane Embury whose energy hasn’t dissipated in the slightest throughout his three sets tonight. Barney Greenway meanwhile is simply a hero of the highest degree. He remains as passionate as he ever has been, a blur of swirling, roaring motion. This is just as apparent in his song introductions as he talks about issues like slum housing and slave labour as it is in his actual performance. Ending with the ever-colossal Suffer the Children, a trio of punk covers including of course their staple rendition of the Dead Kennedy’s Nazi Punks Fuck Off, and the unstoppable power of Adversarial / Copulating Snakes into a solid five minute wall of feedback and white noise, it’s a reminder of how vital Napalm Death have been and continue to be. They remain the standard of what other bands should strive to be.