We’re down at The Duchess for another of the ever-excellent shows that Please Please You have been bringing to York for a good few years now. The gig may have been moved from The Basement at short notice due to the rising river levels, but no-one’s spirits seem to have been dampened and the party goes on regardless. 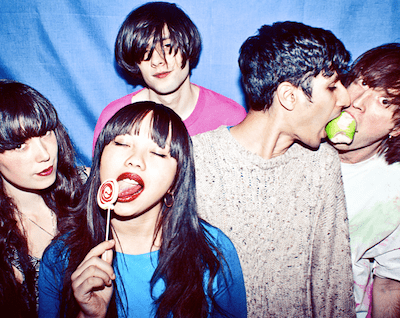 It’s a night of firsts it seems, with local act PartyClub kicking things off with their first gig as a streamlined, two-man “indiebounce” machine – and yes, that is a self-coined genre. Perhaps someone should have pointed out the potential pitfalls of such things – just ask Klaxons, who will take the “new-rave” tag to their grave – but so far it hasn’t proved to be a millstone around the band’s neck, with national airplay and major support slots already under their belts. As for what you can expect the band to sound like, imagine a ‘Club 18-30’ version of Friendly Fires and you’re not far off. Set-closer ‘Young And Free’ sums things up pretty well – chirpy, synth-driven, festival-ready pop that’s fun, but ultimately disposable.

Next up are Missing Kids, who are also playing their first show with a new lineup – frontman Dave Mudie is joined by ex-Federals Sam Coates and Danny Barton. Barton certainly looks like he’s enjoying the change from his current role as frontman of White Firs, battering the drum kit with considerable vigour while Coates lays down driving baselines. And Mudie? Well, he’s just Dave Mudie, the understated but implacable presence at the heart of Missing Kids, whose low-key vocal style and fuzzy guitar playing call to mind seminal indie group The Pastels.

As such, the band are at their best when playing energetic, endearingly ramshackle tracks such as ‘Breaker’, and there are a couple of brand new tracks that are in the same mould. It’s a shame that their melancholy masterpiece ‘Little Things’ gets mercilessly talked over by the crowd – the band have played some beautiful renditions of that track in previous incarnations, but it sadly never gets the chance to really take off tonight. Despite that, however, it’s good to see Missing Kids being reborn as a band again – long may they continue.

To round off our night of firsts, we have headliners The History Of Apple Pie, who are playing the first night of their UK tour in our cozy little city. Much like fellow indie darlings Yuck, they’re not afraid to wear their influences on their sleeves. ‘Tug’ is a dead ringer for The Horrors’ ‘Who Can Say’, the punchy riffs on ‘Do It Wrong’ sound like ‘Smells Like Teen Spirit’ played backwards, and there’s a hell of a lot of My Bloody Valentine on offer. But it’s played in a way that doesn’t make it feel like a pastiche, and these soundscapes benefit from being played in a live setting, roaring from the speakers with mesmerising, infectious clarity.

Someone shouts out that they can’t really hear the vocals. But isn’t that kind of the point? It’s like putting sugar in your coffee – sure, it tastes nice, but it’s not the reason you’re drinking the coffee. Vocalists Stephanie Min and Kelly Owens combine to coo their way through the songs in a manner that’s part Blonde Redhead, part Asobi Seksu, and in my mind their voices primarily serve to add a little sweetness to the band’s swirling noise. Apologies to the band if we’re wrong, but we get the impression that they’re not aiming for profound political statements or existential musings here. What we can make out from a song like ‘See You’ suggests that good old fashioned affection is the order of the day here. And you know what? That’s perfectly fine, regardless of the fact the lyrics don’t feel like the driving point behind these songs – we’re here for the bubblegum shoegaze sound.

The band do have a dark side though, as demonstrated on aptly-titled set-closer ‘Before You Reach The End’ – the vocals shift into a faintly menacing siren-song, while a glorious, Pixies-indebted squall of minor-key guitars erupts around them. It’s an incredible display of force and a fitting riposte to those who might have written the band off as twee shoegazers – The History Of Apple Pie can sure pack a punch when they want to, and you’d best not forget it.