We’re in the futuristic year of 2015, and long gone are the days were rock bands religiously comply with the traditional guitar and drums set up. Along with the invention of techno came something much bigger – throw in some turntables and electricity to an already promising rock band, and you have yourselves a little something pretty special. This combination of heavy rock and techno is becoming more and more popular every day, and when experiencing the electric force of bands like The Qemists, it isn’t exactly difficult to see why. 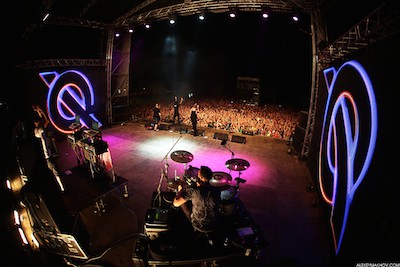 Having just finished a European tour with alterna-metal, Korn, The Qemists have finally landed back on British soil with their brand new album, ‘Warrior Sound’. Performing at Leeds’ newest rock venue, The Key Club is a perfect way to welcome the Bristol-based rockers home – a small and secluded venue that, despite its size, provides an engaging and dynamic atmosphere, something that will bring any band back to its British roots.

When it comes to making an entrance, The Qemists certainly don’t keep their fans waiting. No time was wasted as the band open their set with a venomous energy, vocalists Olly Simmons and Bruno Balanta combining gravely screams with fast paced rap-style vocals – because, in this day in age, who wants just one genre of music?

Variety doesn’t go amiss throughout the set, however. An issue with this genre in particular is that it can, to some, sound simply like noise. The Qemists clearly know how to avoid this problem by performing with musical pieces such as the more melodic and harmonious Humanity. Minus the usual thrashing riffs and breakdowns, Simmons’ vocals are heard in a whole new light, bringing the crowd to a temporary stand-still while watching in awe.

Energetic instrumental, ‘Stompbox’ seems to be the biggest crowd-pleaser of the evening. Some would say this makes the crowd somewhat rowdy – I would say it makes them explosive. With the cleverly synchronised stage lights and frontman Balanta’s encouragement, the crowd quite literally tear the place down – something that is of a standard procedure in the world of dubstep.

When it comes to instrumental talent, I would say the band are in check. Dan Arnold’s ferocious yet rhythmic basslines stand out in particular, along with Leon Harris’ irregular and erratic drumming style, something which added an unusual yet tantalisingly good beat for the crowd to bang their heads to.

Overall, The Qemists most certainly leave behind an electrifying impression on, not just me, but most likely the entire Key Club and the rest of Leeds who could probably hear their explosive set. On a finishing note, in the words of Bruno himself, “You give us energy, we give you energy – and we give it right back!” And that they most certainly do that here.