In our latest Band Spotlight, we chat to Vicious Precious about Pretty Addicted’s development, and inspirations. 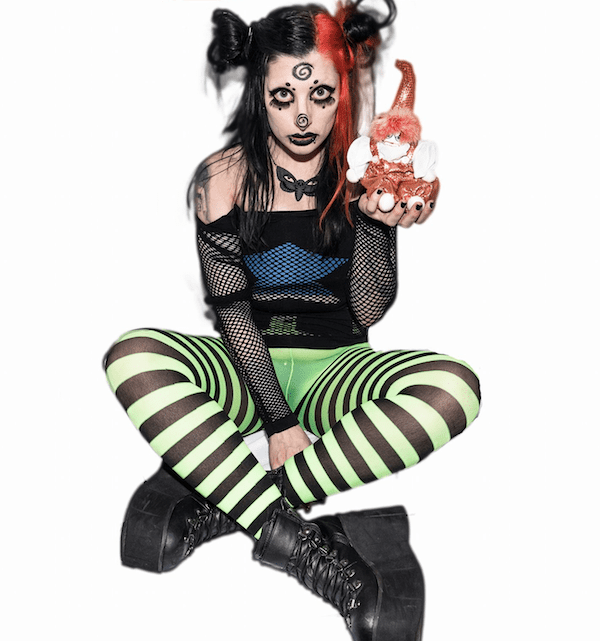 S] What keeps you passionate about creating, outside of music – think movies for example?

I absolutely love movies! Movies are actually a very important part of my life. I have a ridiculous amount of DVDs and a big lover of anything cinematic in general. Apart from movies I am kept passionate about creating by people.

I am fascinated, inspired and disgusted by people. The ones I choose to keep in my life constantly inspire me to see things in a different way or a better way and that keeps me on the right creative track. Sometimes if I’m in a creative slump they can pul me back you of it by the things they say, the things they do or simply just because they love me and can therefore give me enough strength to keep going. I don’t have a whole lot in the ways of blood family but I have the family I choose for myself and that is much more beneficial to me as an artist than any amount of blood family who aren’t even really there.

S] You’re quite open about your battles with mental health on social media, what message do you have for others experiencing the same challenges?

Just keep going, man. No matter what. Don’t let the demons win. Keep a strong and loving support base of friends and family around you because sometimes you won’t be able to do it alone. Above all though, you must know yourself and love yourself. Sometimes people will fuck you over, in fact mostly they will. The only one you truly can rely on is yourself so you better come to terms with who you are ’cause that’s all you’ve got when it all comes down to it. You’re stronger, better and more awesome than you think. Survival is the key.

S] What is your biggest challenge as an artist as we approach 2018?

Fighting with the evergrowing limits on social media. I know, I know, social media is bullshit, blah blah, but it’s not. You can hate it all you want but it’s absolutely MASSIVE platform for artists and it’s harder all the time to get the same results because Facebook and Instagram and these sites are blocking and limiting things all the time.

Artists are going to have work twice as hard in 2018, double their efforts. And hate the game but accept it exists. You got no choice other than to play it. Keep your real life up too, go to regular gigs and events that aren’t your own and network like a motherfucker. Even when I’m at a gig having fun, I’m always working. I find out who runs the place and what bands are playing and I go and introduce myself and make sure they put a face to my name, so that if I contact them for a gig they’ll already know who I am. Gotta always be on your best game, man.

S] What people, and places give you the most inspiration?

As I said before it’s the ones I choose for my life, the ones I choose to call my family. My best friends. They are all so creative and cool and when I see them all succeeding it makes me so proud and at the same time it pushes me to succeed in my own life alongside them. Other artists also inspire me. Artists who put their souls into what they do. So many bands out there, so many fame hungry little goths, but only a few really truly WANT it and you can see it a mile off. This year I discovered The Soapgirls and I can’t speak highly enough of them. Not only are they amazing girls, genuinely fun to hang out with, but the way they put their souls, time, money and energy into what they do, it’s truly inspiring. Plus, they’re great live! Can’t say enough nice things about those girls.

S] What have you learned about yourself through the music you have created, from the start of your career up until now?

That I can endure. More than I ever thought I could. Between people entering and leaving the band, sometimes in a negative way, difficulty with my mental health, financial aspects and other setbacks, I have truly endured. I haven’t given up. Not for a second. I am proud of myself for my efforts in the last six years and I know no matter what I’m not going to stop. Ever. I’ve learned a shit ton about the music industry, the long way round because no one helped me, I had to learn that shit as I went along, and I learn all the time. Never act like you know it all because you don’t. And we’re told as artists we must know it all and we’re not allowed to ask for help or ask questions because it makes us look weak but six years in if I need help I’m fuckin’ asking for it! I don’t care how the fuck I look, if it means saving myself some time then I’m just gonna ask!

S] As someone who has worked as an artist both in down south, and up north – would you say there is a definite north/south divide in terms of opportunities for emerging creative and musical talent?

YES! DEFINITELY. I’m a Londoner in my veins through and through but London constantly disappoints me with music. People aren’t urning up to gigs anymore in London, they aren’t going to events, they’re complaining but not going out to anything, they seem to have lost their interest for live music, events and nightclubs.

It’s really, really sad. In the North people are constantly going to live events, even if they haven’t heard of the band which is mental but awesome! I have discovered a few bands myself since living in the North just by going to gigs where I didn’t know any bands on the line up but just to go out.

People in the North come out to two or three of our Northern dates on tour whereas in London you’re pulling teeth, just to get them to travel half an hour on the tube to come out to your London show. It’s very disappointing as a Londoner because we’re supposed to be known for our “cool Camden” persona but it seems London has los interest, and I am not even sure if it will change, but I hope it will!

S] How important is the image of Pretty Addicted?

Very. The image is the visual representation of what we’re all about. Apart from the fact that our music doesn’t really fit into any one genre, our image is the thing that separates us from everybody else. I have always had a ‘strange’ image and an ‘out there’ style, and I like that I can bring it into the band. Visual things – a bit like my love for movies- is something I love to play with and experiment with. I like to see my face, body and band as a canvas and I can dress it up any way I want because there is no limit. We don’t fit into a box therefore we can do anything, and I love that.

S] What specific experiences and ideas led to the creation of the track ‘Fantasy Land’?

My last relationship was an up and down rollercoaster, and one of the last things he told me before we split up was, “You live in a fantasy land” and he was saying that referring to my mental health; that the things I do and think are not things that belong in reality.

That I don’t really LIVE in reality. So I wrote a song about it, about the way my mind works; that my “fantasy land” was better than living in the real world because the real world is just too much to bare. I think a lot of people can relate because so many people suffer with their mental health and they create a world in their head that is safer to live in that the real one.

I have plans of absolute world fucking domination! 2017 ate me the fuck alive; it really destroyed me piece by piece. Even now, I’m still staring at the debris, trying to piece it all back together, but I refuse to take 2017 into 2018 and the new year will not get to do to me what 2017 did.

I am going to book as many gigs as I can, we have two festivals booked already, one being Amplified Festival and the other yet to be announced – but it’s a really great one, and I’m hoping to do more international shows as well. I won’t rest until I’ve accomplished a shit ton more in 2018. In fact, I never rest, so I’m just going to keep doing more and more. A creative mind never sleeps.