In our next band spotlight, Paddy Beer chats to The blues-rock act, The Goodnight Ladies from York. 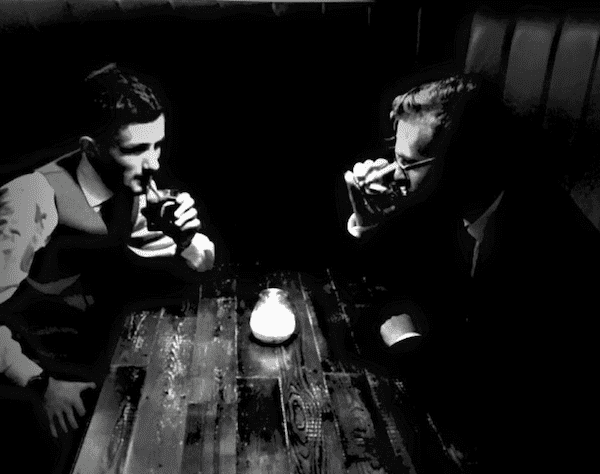 Ben] “We’re The Goodnight Ladies and this is Nathan our loud-mouth frontman!”

Nathan] ” I’m the singer and guitarist, warbler and front man. This is Ben he’s the drummer with the broken collarbone.”

Nathan] “So we’re currently drummer-less and this is Andy, he’s the bassist and co-song writer, he also produces everything we record as well”

S] How did you meet?

Nathan]  “Well Andy and I met at college. I went to meet band members because I kind of decided at the age of 15 that I wanted to form a band, but everyone I new who could play music was either far better than me or a total asshole. So I decided to go and do music at college to meet like-minded people. But it turned out there were very few like-minded people, because they all just went there because they didn’t know what else to do with their lives. They all just went to prolong actually having to go out into the real world.

Then, I met Andy and we asked him out of the blue and he just went and bought a bass online, having never played in his entire  life…and then he cycled to our second practice and that was that. And I met Ben on ‘join my band.co.uk’. We had an old advert up for one of my old bands and he contacted us after we had given up, saying he wanted to play drums for us.”

S] “The Goodnight Ladies is a great name. Where did it come from?”

Nathan] “Well, me and Ben were talking about band names because we didn’t have one. And we decided on something horrible like The Rattle Men or something.”

Ben] “The Brown Snakes. That was it. It was horrible”

Nathan] “Yeah. And then I was going through shuffle on my phone thinking about band names and Goodnight Ladies popped up and Lou Reed is one of my main inspirations. So the Goodnight Ladies just stuck.”

S] What do you think of the current York scene?

Ben]  “There’s a lot of diversity. Our first gig at Fibbers was with a big metal band and then everything was very different. There are just a lot of genres in York.”

Nathan] “I think some bands here aren’t great. I don’t mean that in a horrible way, they’re just not my bag. There are a few great bands though like the Franceens, The Black Lagoons, Seep Away, and …And The Hangnails are great and lots more, but there are a particular sect of bands that I just really don’t like.”

Nathan] “Shoegaze as a genre is fine, but when mummy and daddy buy you weed, and you do loads of drugs and that’s your main point, I think it’s a ridiculous reason to be in a band. I mean, the bands that are good are really, really great. I just think there are some people who are in bands just for the sake of being in a band and it needs to stop.”

S] Who are your main influences?

Nathan] “Well I think what makes us work better as a band is that we all have very different influences. But for me its David Bowie, Lou Reed and Iggy Pop , The Smiths, Suede and Yack, Pulp and they’re probably my main influences”

Ben] “I couldn’t really narrow mine down. I listen to a lot of electronic and hip-hop stuff. I try and bring influences into the band which doesn’t always work, but sometimes it does. But I would  say Queens Of The Stone Age are my favourite band, and rage against the machine and things like that.”

Andy] “And I like more basic melodic things like The Beatles, Oasis so on. My two favourite things are probably the 60s British invasion and 90s Brit pop.”

Nathan] “The music and lyrics are influenced differently. The music usually comes from me messing around on a guitar but the lyrics are very literature based.”

S] “If you could see 3 bands live who would they be, dead or alive?”

Andy] “Oasis, The Beatles and I’ve always wanted to see Abba, because it would be really fun.”

Nathan]  “I would like to see live, David Bowie in the Ziggy Stardust era definitely, Nick Cave and The Bad Seeds and third would probably be, The Smiths in 1983 just as they  came out.”

S] What is your favourite thing about being in a band?

Ben] “The women and the drugs [laughter]. No I like the camaraderie; it’s like having friends that are also your family.”

Andy] “My favourite thing is the feeling you get just after getting off stage. Because you’ve spent the last 2-3 hours crapping yourself, it’s just a relief but you’re so buzzed up that you just want to do it again.”

Nathan] “My favourite thing about being in a band is probably the idea that one day we could be something great. That one day we could influence someone else’s music, or make a kid pick up a guitar and think ‘I want to play like him’ or ‘I want to sing like him’. And that’s what I love about being in a band, you could be someone’s primary influence.”

S] What is your least favourite thing about being in a band?

Ben] “Probably Nathan [laughter]. I guess if you get stuck in a rut in a band it takes a long time to work up again. If you do a bad gig and your next gig is two weeks away, you’re just going to feel horrible and nervous the whole time.”

Andy] “I hate the nerves even though you’ve done it loads, you’re still nervous.”

Nathan]  “I guess mine is the idea that you’re never going to achieve as much as you want to achieve. Everyone wants to be big, and I know we probably won’t be, but it’s the idea of never having any success at all is really scary because although we’ve only been together for 15 months we’ve all put in so much effort.”

S] What is your goal as a band?

Ben] “To change one person’s life with our music. I think that’s a goal for any band. To be heard and impact people’s lives. You could easily write crappy pop music that’s in the charts that people listen to but to have someone appreciate your music and really listen to it is a big goal. If one person in 40 years listed us as one of their influences, that would make it all worth it.”

Andy] “And obviously we have our personal goals. I would like to make a living of it and not work in a shoe shop my whole life. Making music for a living is the dream because it’s something that you love, that you get to do for a living.”

Nathan] “For me, my aim in this band is to make sure we’re as good as we can be and to achieve the most we can achieve. But we’re going to try as hard as we can and grab it by the balls.”

S] Lastly, what are your plans for the future?

Ben] “Expand all over England and attack people with our music.”

Nathan] “Well we’re recording an album at Melrose Yard which were going to be selling. But I would like to expand the band into a multimedia project. I would one day like to make a film using our music as the soundtrack; I would like to expand onto every platform possible. I want us to do a modern day Ziggy Stardust; I want us to take everything that is kicking around at the moment and slam it all together.”