Recently while stopping in at Creative Vandals in Hull, we caught up with Andy Walker, bassist for hardcore punk act Outspoken Silence to talk about their year and plans for 2011… 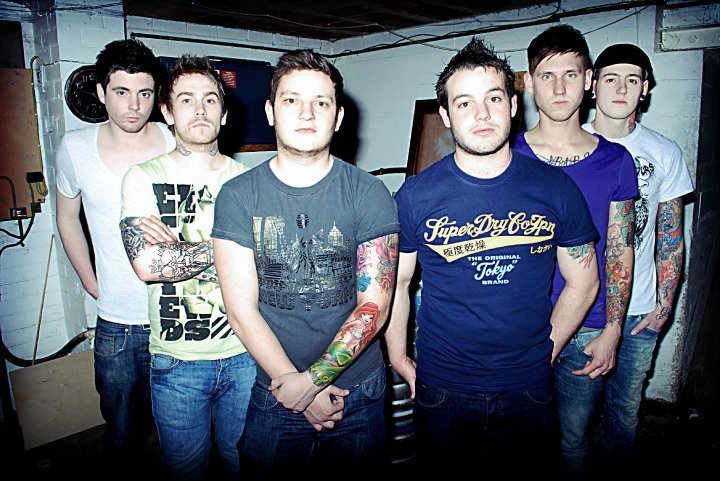 S] In what ways does your work as a tattooist tie-in with your role in the band?

AW] Yeah, there’s a lot. It means I have to do some very long days! I can be working from 9am until 6pm here, and then be running off to play a gig after that which will finish at about 11, then I will wake-up and do it all again the next day. It’s fun though, and I wouldn’t do it if I didn’t love it!

S] What’s the secret to your success – it’s difficult to recall an alternative band from Hull that has got their name out so effectively?

AW] I think that’s because we haven’t split-up! We’ve been together five years and in this area, we have seen so many bands come and go and it’s difficult. We’re one of the only bands that have still been going consistently for that long. The reason we started this band was because all six of us – there was five originally – just wanted to make music and have a laugh together. We just wanted to play! We’ve never done it to ‘look cool’ or make money. This is something that we have always wanted to do, and the fact that we are all friends while doing it is a bonus, and the reason that we are still going.

Hull’s music scene used to be awesome. It was a lot different a couple of years ago. Hull still has a great scene for indie music – if you visit Princes Avenue in the city on a Tuesday night there is always an indie act playing. There’s not that many places that cater for our style of music. We did play The Sesh at one of those venues called Linnet And Lark, a couple of months ago and I think that all of the locals sh** themselves! We are not the ‘normal’ band that comes out in Hull. There are other great venues including The Ringside but there’s on;y so many times that you can play it without people getting bored – it’s like tattooing, nobody wants the same tattoo twice. I think if you want to do well as a band coming out of this area, then you have to go out of town.

S] Do you have a defining moment from the band’s history?

AW] I think that would be winning the Kit Kat Battle Of The Bands this year. We heard about it because one of our vocalists’ mums said, ‘Oh, there’s this thing going on at Hull University and a band has dropped out – we rang ’em up and just asked to be on it and they let us on. We went down there without having any idea about the competition or the prize, played two songs and, out of eight bands we won on the public vote. They were like, ‘Right, you’re going to London now for the final!’ and so that was really cool because we were well looked after – they put us up and everything. So when we arrive, we find out that Frankmusik [national electronic musician and producer] is involved as a judge and that was great for us in terms of exposure, but because we are such a heavy band, we thought that we would never be able to win it – the prize was £3,000 in cash and a track remixed by Frankmusik alongside a music session for advice with him. We didn’t expect anything, but we ended up winning it, and that was the biggest thing ever because we’ve been going for four years without a penny and then, we finally have some money! From that exposure, we got to play Reading and V Festival. That was class – it wasn’t main stage or anything – it was a small tent, but a really good experience.

AW] Getting sweaty with my mates! [laughs] It’s a bit like tattooing again, in that we never know what customers are going to come in. We never know what type of people we are going to meet when we play a gig. We’re always excited to meet and watch new bands because they could be great, but they could be sh**. We always get to hear stuff that we normally wouldn’t and it’s really interesting to hear what other people are doing.

S] What inspires the band when you write?

AW] Generally, a member of the band will turn up to practice and say, ‘I wrote a song, let’s have a go at this’ and we’ll jam to see what fits. From there, we come up with a basic idea and go from there. We’re constantly listening to other types of music – we don’t just listen to metal or rock, so we have a variety of influences. Sometimes, we don’t even set out to write a song and somebody will play something and then we will expand on that. We don’t take ourselves seriously as a band at all – we go with the flow and that strategy as been okay so far?

S] Do you have a song that you are most proud of?

AW] I don’t really know because we have released four CDs. Every time we do that, we are happy with what comes out. I really like the process of recording and working in the studio, because it feels like all of our hard work has paid off and we have got something to show for it. The new CD [‘The Tides Will Take Us Home’] is the best thing we have ever done by far. But, we are writing stuff now that to me, is just as good if not better. We’re always pushing ourselves to improve on what we have done.

S] Over the four releases, how do you feel you have developed as a band?

AW] All of our first material was very simple and based on a structure of verse, chorus and verse. Now, we don’t put any barriers in place and ‘go crazy’. Some of our more recent songs have got so many different elements in and I think that’s exciting. We are not just sticking to rules.

S] What would you say is key for a new alternative band coming out in Hull, and how to succeed?

AW] Enjoy what you are doing, and give it your all. You have to give it your best, and do not do what’s expected of you – do what you want. You need to gig your arse off and let everyone know about your band – get on Facebook and the other platforms and really promote yourself. It really is about who you know, in my opinion. You need to get as many people listening as possible. It’s important to be nice to people as well – we have become friends with some of the people who watch us, and that’s great because they will keep supporting us and coming back. We know bands who ignore everyone and it doesn’t get them anywhere.

S] What are your biggest aims with Outspoken Silence for 2011?

AW] Frankmusik has stayed in touch with us and offered to release two singles from us on his label, and we are going from there. He’s been giving us some advice and telling us to write simpler songs, so we have taken that on-board and we will be trying to get out there. We’re going to be doing loads of gigs and touring with an aim to do some festivals. We want to try and be selected for the Unsigned Stage for Reading And Leeds Festival – that’s our biggest aim of the year. We’ll play for anyone who will have us!

S] What do you most enjoy about Hull’s music scene?

AW] People here really seem to get ‘into it’ more at a show. If you go to a gig at The Ringside or anywhere like that, if people like you then they will dance and go mental. It’s not like that everywhere else and people can just stand there with their arms crossed and you can’t even tell if they like you or not. I really love the people and how they get into music, I just wish there was more for them to enjoy!