Former Kasabian guitarist and keyboardist Chris Karloff has been a busy bloke, and he’s set to release his debut album under the name Black Onassis with Nick Forde (bass and keyboards). ‘Desensitized’ is out in September, and instead of having a constant vocalist added to the line-up for the album, Onassis on record features Liela Moss of The Duke Spirit, Morgan Kibby of M83 and Ben Gautrey of The Cooper Temple Clause. Not a bad bunch of guest collaborations. Here, we talk to Chris and Ben about the music, inspirations, ideas for the future and more. 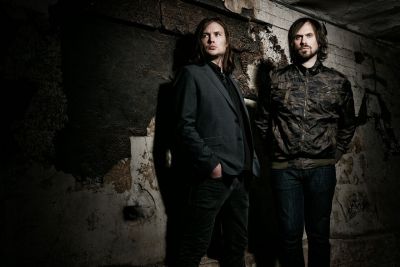 S] What have been some of the biggest challenges for you guys, getting the Black Onassis project off the ground?

C] “The biggest challenge has been adapting to way the music industry has changed since I first started out. It’s been an adjustment, but I think it’s a great time for musicians to be as creative as they want and really connect directly with fans. There are all these new social media platforms to showcase your music. We didn’t really have that when I was starting out with Kasabian. It’s been fun to play around with for sure.

I think it’s also been a challenge to shake the inevitable comparisons and association with my old band. This is something new and different, and you don’t want people to compare the two. I’m really proud of my time with Kasabian. We were a bunch of normal kids from Leicester that created something really special. But Black Onassis should have its own unique identity now. And I think the biggest challenge is always to just produce the best quality music you can. That’s all that really matters at the end of the day. I don’t want to let people down.”

S] How did you enjoy collaborating with different musicians on this record – were there any particular standout moments?

C] “It was a really good experience working with different vocalists. I think they all have such cool and distinct voices, it was fun to play around and write songs that really showcased each of their talents. The thing that really blew my mind was the all the lyrics have a common thread, which I found really interesting because none of the collaborators had any contact with each other while writing and we didn’t give them any theme or guideline to work with. By some strange fate it all fell into place and the songs all kind of intertwine. They all fit really well together and tell a story.”

N] “Working with different singers for this record was awesome.  It seemed like every track we sent out we got back something way better than we expected. For me the standout moment was hearing Liela’s vocal track on ‘Trip B’ for the first time. I mean she absolutely nailed it, blew me away.”

S] Will any of these collaborators be appearing live in the future?

C] “Yeah, I hope so! It’s something we would really like to do at some point. It will just give the live show another interesting and exciting dimension. And it’s always just a good laugh to play shows with friends.”

S] We saw some live footage – looks mega! Will there be a UK tour at any point?

C] “Thanks! Yeah of course we plan to tour the UK, in the very near future we hope. It’s something that is really important to me being from there. Also the energy you get from UK fans is like no other.”

N] “Most definitely. The UK is likely first on our list of places to make our presence known.”

S] How important are visuals and live performance in general to the impact of Black Onassis?

C] “Massively important! We want to make our shows a really great experience for our fans. We work with our friends from Ghost Cow Films who put a lot of thought into creating visuals that really complement each song. And sonically we just want our set to be as powerful, and loud as possible. I think you have to put a lot of thought into a live show, the people paying to come see you deserve that extra effort.”

N] “I think both are huge.  With no front person I think it’s important to find other creative ways to capture the imagination of the audience, both in what they’re watching and in what we’re actually playing on stage. We want this project to be a total experience for people, not just a couple of dudes on stage playing some stuff.”

S] Chris, how is the inspiration different from your work with Kasabian – in terms of the type of stuff that’s motivating you creatively?

C] “Well, when we wrote the first Kasabian album we were living on a farm together and were pretty isolated from the outside world. It was actually great, it allowed you to really get inside your head in a very calm and introspective way. I wrote this album while I was living in New York City. You couldn’t really get more different in terms of surroundings.

When you’re living in a big city you draw inspiration from everything, there is so much stimulation everywhere you go. You are always really switched on. I drew a lot of inspiration from the constant construction that goes on here, all the loud banging and drilling. It drives most people crazy, but I incorporated a lot of that into some of the tracks. Plus, NYC is the birthplace of hip-hop, so you just naturally become inspired to write some really great beats.”

S] Nick, how has it been for you working on this project – have there been any moments where you have been out of your comfort zone?

N] “This project has been a huge learning experience for me. From day one I knew I was given an opportunity to be a part of something special and it feels amazing to see it finally getting off the ground. To be honest there have been a million times where I’ve felt out of my comfort zone, but being challenged is what makes you better.”

S] Nick, talk about some of your musical influences, and how they have bled into Black Onassis?

N] “I grew up during the birth of the grunge era. Nirvana, Soundgarden, Smashing Pumpkins, those were the first bands that really inspired me to play music. Over the years I’ve played in everything from metal bands to even a Michael Jackson cover band so I try and incorporate a little bit of everything from my past into Black Onassis.”

S] Aside from ‘Brain’, can you both pick out a track from the new album that you feel like defines the Black Onassis sound at present?

C] “For me ‘Desensitized’ really defines the sounds I love and Steve [Young, The Black Marquee]’s vocal performance is so haunting on that one. It definitely sums up the Black Onassis sound.”

N] “That’s a tough one. I think you could make an argument for any one of the songs on the record that best represents our sound. Each track is it’s own animal and we approach each song from a slightly different angle so I don’t think I can pick just one.”

S] Both, how are you challenging yourselves in new ways as musicians with BO?

C] “By keeping an open mind to new technology and by trying to introduce new instruments into the overall sound.”

N] “For me, I’m always trying to come up with new ways of creating different sounds that I’ve never used before. Whether it’s through discovering new instruments or just messing around with some of the stuff we have lying around already I’m always looking to try out new things.”

S] What types of things outside of music are helping that creative process?