For our latest Reverbnation spotlight, we chat to Digital Summer’s lead guitarist Jon Stephenson about the band and some of their major plans as we head into 2013. 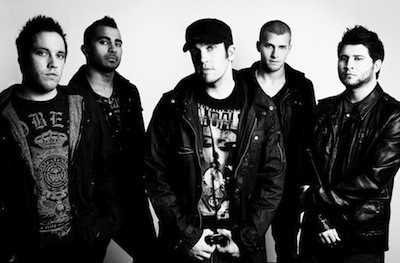 J] “Digital Summer as a whole would be inspired by bands such as Deftones, Sevendust, Staind, and Chevelle. Rhythm guitarist Ian Winterstein and bassist Anthony ‘Guido’ Hernandez were inspired heavily by the Deftones. Personally, I am a huge Mark Tremonti, Zakk Wylde, and Clint Lowery fan. Vocally, Kyle Winterstein grew up on everything from Metallica to Billy Joel, but he recalls really getting hooked on Staind’s ‘Dysfunction’ album. Kyle’s melodic vocals over heavy grooves have become a signature part of the Digital Summer sound. Kyle also gives credit Trent Reznor [Nine Inch Nails] for exposing him to dark melodies that capture the listener.”

J] “It’s real life. Everyone is this world shares a common bond…the beautiful and tragic events of the human experience. A lot of these song themes come from brothers Kyle and Ian’s career jobs outside of music. Ian is a flight paramedic, and Kyle is a firefighter and paramedic. Between their jobs, they often see things that inspire an idea. This life is short and fragile. As the sole lyricist, Kyle tries to keep that as a guide for how he writes lyrics. Musically, I think we all just hear something and know when it clicks with the mood.”

J] “That’s tough. We kind of run all over the board. I guess the title track from our newest album, ‘Breaking Point’ captures a lot of what Digital Summer’s sound is all about. Heavy, yet melodic, and certain aspects of our aggressive yet fluid style.”

J] “We want to tour the UK! If it was merely a matter of booking plan tickets, we’d have already done it. Hopefully we’ll catch the attention of someone in the UK who can help set something up. We’re blown away by the dedication and support we’ve received from our UK fans! You guys are incredible!”

J] “Energy. We leave it all out there every night! We say this all the time and we mean it! If you’re not willing to get up there and bleed for your fans, you have no business being there. We try to keep the set moving and really engage the audience. Everyone is there to have a good time and it’s our job to make sure that happens. We have been told we are extremely hard to photograph because we move all over the place during our shows!”

J] “I think, being taken seriously in the radio game, particularly since we’re unsigned. Our songs do great on radio and every station that gives us a chance seems to agree. However, because we’re unsigned – by choice, we actually turned down every offer we’ve received – it seems to be a bit of a struggle each time to get stations to give us that first listen. After they’ve heard the music or seen the shows, it builds quite nicely, but that first step each time is a battle. Realistically though, nothing about this industry is easy, so all in all we’re pretty happy with how things are going with us.

Aside from the radio aspect of the industry, online piracy is a detriment to a lot of artists, including us. We released our latest album, ‘Breaking Point’, through an online Kickstarter campaign. One of the early incentives was an early release of the album, and unfortunately, the album was leaked several weeks before the official release date. Unfortunately, online piracy is something that probably won’t go away anytime soon, so it’s kind of a pain that musicians just have to live with.”

J] “To tour, tour, tour! We really want to get out there in front of the fans. Also, we might put out another acoustic EP in the summer, just for the hell of it, while we continue to tour on the new album!”

My boys, they're amazing! *-* love the songs and we try everyday spread the word around the world!