For our next spotlight, we chat to one of our favourite bands of 2013, New York three-piece doom grunge act, GHXST! Shelley X (vocals) and Chris Wild (guitars) lay it out for us… 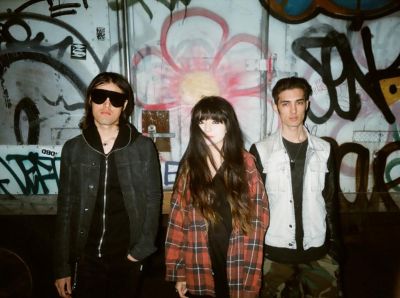 S] Are you looking forward to a return to the UK soon?

S] Did you enjoy visiting any places particular when you last came?

CW] “Manchester had a really great vibe, and I loved meeting people out at the Birthdays gig we played there!”

S] Can you define doom grunge for us? When did that term come to you?

SX] “I think it’s more like an attitude than a genre!”

CW] “I guess, it’s kind of like that Velvet Underground  song ‘I’ll Be Your Mirror’, the idea of “doom grunge” is to reflect existence in an intimate and transgressive way.”

S] It’s been said that the idea for ‘Black Camaro’ came up in a cheap motel in California – can you talk more about that inspiration?

CW] “We were mixing a few demos in San Francisco and staying in a motel across the bay in Berkeley. One afternoon while we were laying around jamming, we started talking about black Camaros. How they’re kind of like this symbol of freedom and delinquency for the guys we knew in high school that drove them.  That image just stuck…and the main riff came to me later in a dream.” 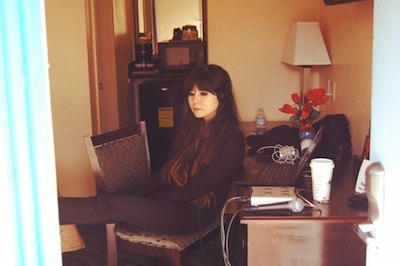 S] Is there a song that you’re working on at the moment, that you feel best defines where the band is at right now?

SX] “One of the new songs that I personally love was written on July 4, and recording it now brings back all the wild emotions from that night!”

S] Talk to us, as much as you can about the new material that you’re working on right now for an album – does it have any specific themes?

CW] “All of our EPs end up as mini-concept albums, and the process of getting there is strange and volatile. Let’s talk again when it’s done.”

S] You reference Placebo, as well as a lot of 90s alt-rock and industrial sounds as influences in interviews – do you have any specific songs that would be able to soundtrack each of your lives that you can tell us?

CW] “What really influenced me about grunge and a lot of the 90s cultural climate was how it could be totally aggressive but at the same time deeply vulnerable.”

SX] “Yeah, ‘Without I’m Nothing’ by Placebo was definitely a record that changed my life.”NLG] “For me, it’s ‘Gimme Danger’ by The Stooges!”

S] Your cover of ‘Dragula’ is hypnotic – why choose to cover that song from all of the Rob/White Zombie catalogue?

CW] “That was another magic moment, we just did it in one take really late one night.  But yeah, Rob’s the fu**ing man.”

S] If you could invent a Frankenstein’s monster for the GHXST sound – the head of NIN, the arms of Rob Zombie and the legs of The Jesus And Mary Chain, for example, what would it be and why?

SX] “Of that monster, I think we’d be the heartbeat!”

S] Do you have a message for UK fans?

SX] “There’s no rest for the wicked…”