In our next Reverbnation spotlight, we chat to Harlequin Jones’ vocalist Amanda von Loon about the band, their inspirations and plans for the rest of this year! 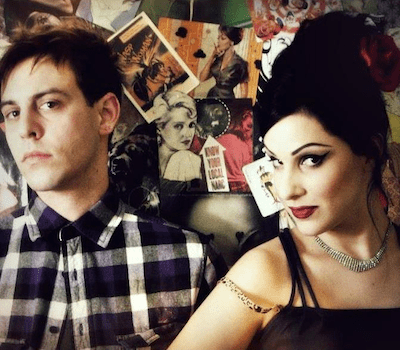 A] “We both really like strong women singers and its always a big plus if they play an instrument too. I love when a woman can growl and scream and sing while rocking out on guitar or destroying a piano. Aside from women, in the car we listen to a lot of Queens Of The Stone Age. Their precision of playing makes me want to go practice piano hardcore, which is kind of funny since most people would associate going to practice playing rock guitar. Jesse [Arcado, drums] mainly likes metal like Cannibal Corpse but then he also loves Alicia Keys. I have a lot of guilty pop pleasures that I can’t reveal. I think it’s good to have a well-rounded list of musicians you appreciate. We play kind of ‘dark’ music, so I can’t listen to dark music all the time. I need a dance beat in there every now and then!”

A] “I always sound like a whiner, but honestly most of them are about fighting demons, or them getting the best of me. I think that’s what a lot of bands and artists write about. These days, I don’t write much about a love life, or describing the people I see, or how much I hate someone. I’m really self centered right now, just trying to keep going every day.”

A] “Since we just released a new EP called ‘Overflow’, those recent songs are still very much playing in our heads and apply to our everyday lives. A lot of it is melodic, maybe a little morose but also breaks that mold by getting fast with a driving rock drum beat, specifically ‘Pass The Time’.  Then on the flip-side, the song ‘Overflow’ is more laid back and a completely different emotion. It’s pretty much the ‘super-sensitive’ song on the album. As for defining our music in one song, it’s really hard to pinpoint. We can be kind of all over the place. Maybe we haven’t written that song that sums everything up yet.”

A] “There’s a few fans, specifically in the UK, that I’m very grateful for and I know they have told many friend of theirs about us. We are going to keep working and playing music forever so we can travel to England, as well as other countries. That would be amazing. We have a couple friends that live there. I think a trip there is on the to-do list.”

A] “People can expect a lot of attitude, some chaos, and a splash of humor. Probably some bad jokes in-between songs. A guy after a show told me I was a mix of ‘Mae West, Ozzy Osbourne, and Amy Winehouse’.  I really don’t know how accurate that it is, but I think it’s awesome.”

A] “Pretty much everyone I know is having bad issues with the same things revolving around that little thing called ‘money’. No one seems to have much of it. That gets in the way of say, making merch and putting out music. But more importantly, it gets in the way of supporting charities to bring back the wooly mammoth. We can’t let these things hold us back though.”

A] “We’re working on a music video right now for ‘Pass The Time’. Then we’re planning on making another one for a song from the ‘Overflow’ EP. We’re aiming to start some small tours. We want to record another EP this year. The typical band goals. I’d love to see some good live music, find out about more bands/artists. Its one thing to make music, but to enjoy others’ music as well keeps me motivated.”