Having been at a number of shows where these lads have played support, we couldn’t really ignore them. With a powerful drive to succeed, a strong look and some killer riffs My Passion are set to take over in the UK alternative scene over the next few years. SPHERE happily shares a few words with Simon (bass) and Laurence (guitar/vocals) about their music and the new album ‘Corporate Flesh Party’. 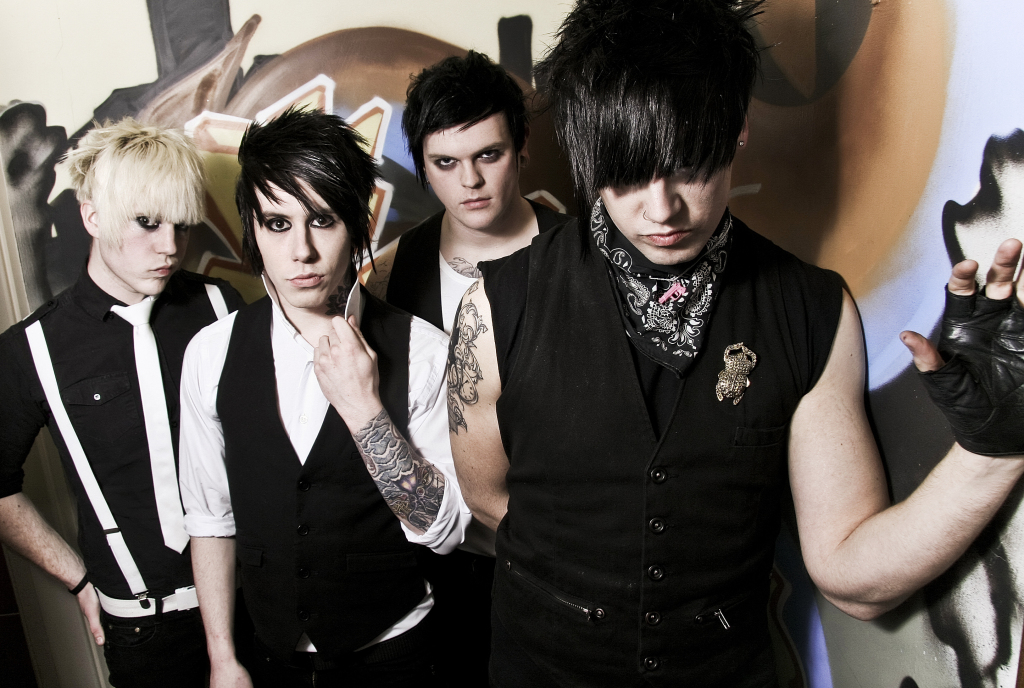 “If we end up going down, we will have the biggest grin on our faces”

S] We know that your album is based around how the industry tears at a product without a care for who is behind it but, can you tell us about how the themes and ideas come across in certain songs?

Simon] Each one of the songs explores a different facet of the journey that we have taken together, through all the highs and lows of life and music, all the excitement and the all the bullshit you go through. It’s a real mix of dark and light, it’s not aimed at the industry, and it’s not a middle finger to ‘the man’. On the whole, it’s an observation from us on what goes on.

Laurence] Yeah, the overall feel is actually pretty optimistic despite the dark backdrop. It’s a pretty tough time for many people in this modern world but we haven’t got it so bad, we are here and able to do and create what we love. The Gallows just made a very dark album considering the times we are going through, our record is more in the vein that there’s still a lot to live for and people can find joy and excitement in this and if we all end up going down, our band and the people who have listened to this album will have the biggest grin on our faces.

S] You are very much based in the South, but do you find any major differences between the crowds you are used to and the crowds in the North?

Simon] There are normally some noticeable differences in the way the audience responds. I can’t really define between North and south but definitely different towns have completely different ways of reacting to us. Some just stand there enjoying it immensely, but then a lot of the crowds flail their arms and jump to every beat in a sweaty mass.

Laurence] For a lot of people it’s a chance away from normal life to express themselves and unleash some of their excitement from within and they are able to feed off of our enthusiasm. There is definitely a difference with crowds as you move further away, like many Germans would absolutely adore the set whilst only tapping their toes and the Scandinavians would attempt to grab you and not let go. I think it depends what people were fed when they were younger, some are fierce.

S] How are you expanding the concept of My Passion visually this year with the new record coming out?

Laurence] My Passion is always evolving, we never want to be stagnant and we are always trying to improve on the last tour, keeping it fresh. For the album tour we wanted to link some of that imagery on the artwork with the live show so we are putting some of the vulture men onto banners along with new stuff on to the front of our amps which all links in. We’ve invested in some amazing new lights that hook in to our electronics and sync in with our music. We want to have the maximum impact possible and, for people to go home having experienced a performance that they wouldn’t get to see anywhere else.

Simon] We are also bringing out new lines of our My Passion Fashion at the moment, it’s really exciting to see kids in our clothes on an everyday basis. These also link in with the new epic stage show we have planned for the album tour over the coming months. We want to make a real impact with the show and take it up a notch.

S] What keeps you passionate about crossover music (blending rock and electro) now in 2009?

Simon] I think I just love the power of rock music and the range of emotions it can take you through in just one song, then the groove and PHATNESS of electro music that makes your body move to the beats. It’s just the perfect combination of music to get our passion across.

Laurence] Yeah, it’s not something we have set out to do specifically. We’ve created something that we consider fresh and new. I think it has just evolved this way because of what we grew up with. We’ve never just wanted to be a punk band or just and indie band because for us that puts limitations on what we come out with. We want to keep My Passion open for the future and that what keeps us excited.

S] You are without question one of the hardest working bands on the UK scene, can you tell us about what goes on in a typical My Passion day – what inspires you? 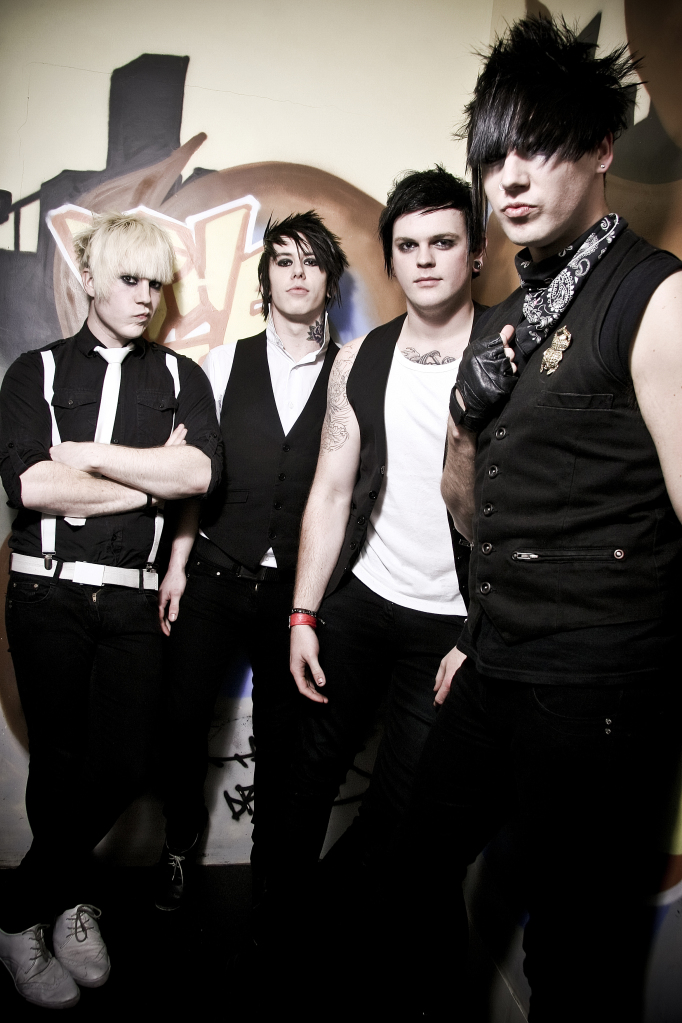 Simon] Usually, it involves waking up in a Travelodge room, us not knowing what part of the country we’re in because we are all the same room, then making our way to the venue after bathing and a swift cup of tea. We love just rolling in and doing our thing, from setting up the equipment to soundchecking, the pre-gig venture for food, exploring the town. The show is the biggest hype for us. Then just hanging out with the fans and really taking it all in! I love it.

Laurence] We’ve always had the view that nothing will come and get you. I mean, if you want to be successful and follow the dreams and ambitions you have then you need to get out into the wider world however that may be. Like Simon said most of it is touring and carving out a path on the UK music scene and then when we are home it’s designing new merchandise, promoting new releases, sending out posters and promo, arranging the next assault on the road and designing more art. It’s pretty relentless and it engulfs nearly everything we do, we’ve had to dedicate our lives to it.

S] You have some big fans in the glam-rock circle from David-Ryder Prangley (Rachel Stamp) to Jeffree Star – what kind of advice and support have they given you?

Laurence] We have met lots of great people on our adventure so far and we definitely learned a lot from their experiences. To have been invited on tour and to be able to play some pretty amazing shows to new audiences was amazing. That’s where we really come alive and for us having these chances has allowed us to win over so many new fans.

Simon] David has been a great friend for years and has helped us develop in certain areas, no real specific advice, I guess certain things have just rubbed off from being around him and you always pick up things from bands and musicians who have been in this tough game for years and especially those who are great performers.

S] Apart from a Tim Burton movie, if you could replace the soundtrack of any film with your music what would it be and why?

Simon] Oh that’s a tough one, there are so many films I love, I reckon our music would fit really well to some kind of dark action film like The Dark Knight or Underworld? The choice of Tim Burton was taken away – ideally it would have been Edward Scissorhands.

Laurence] I don’t think we are quite French enough and don’t have anywhere near enough accordions right now but I adore the Amelie soundtrack and film. I also love War of the Worlds. I think I’d love to cover Jeff Wayne‘s soundtrack.

S] You are constantly moving forward, so do you already have a vision about how My Passion’s sound will progress in the future?

Simon] We don’t really try and gauge how our sound is going to develop, we just let it flow and see where we end up, I love the way that we are now, but two years ago I had no idea how we would sound in the future. It’s exciting at the moment and it keeps everyone, including us, on their toes.

Laurence] It won’t be exactly the same but of course it will link. That is part of the natural development. We’ve already written four tracks for the next album and our debut isn’t even officially released yet. We’ve never been a band that can just sit around. The sound at the moment is different again and we are working on advancing the synths we are using to give it an even bigger sound. We want each track to have different elements. So far, one is a dark but really groovy and a more electro-orientated track whilst another has a more upbeat rock feel. For other new tracks though, anything could happen.

S] You are artists, designers and promoters alongside your career as a band, what advice do you have to anybody else (within fashion, media or music) who wants to take this kind of entrepreneurial approach to getting their work out there?

Simon] You’ve just to go out there and push your work in people’s faces and make sure you never back down or give up with what you are passionate about. That’s how we are with our music, we love it so much and what we do, we don’t let anything stand in our way.

Laurence] I think if you have an interest in design, fashion and music you have to express it. I’d say to anybody, the openings and opportunities won’t just present themselves to you, of course there are lucky ones out there but I think that you learn an awful lot by going out and working hard at what you’re passionate about and if you don’t ever show it to anyone then you may never get the acknowledgement for it. Be prepared for criticism and some amount of failure but if you truly love what you do no one can take that away from you.

S] What has been the band’s defining moment together thus far?

Simon] There have been a few, I guess recording our first album has to be the biggest achievement that we have had. I just a had a moment where that idea really hit home, it’s done and we have an album that we are so, so proud of. Also I have to admit seeing our beaming faces in Kerrang on a K! Icon poster was a pretty crazy moment for all of us I think.

Laurence] Yeah, the album is a huge moment in our history so far and last week having our poster sandwiched between Marilyn Manson and Billy Talent in Kerrang. That was truly amazing for us. Not just because we have put everything into this band since we formed but also the feeling of achievement and acknowledgement having not even released our debut album yet and already having a big demand. It’s something we have built by working on the show, going out and playing live and being the alternative to a lot of other music. It makes us quite proud to think that we are not only affecting ourselves in a positive way but lots of our fans as well.

Check out the video for ‘Day of the Bees’ below: