Made up of the Zmed brothers, Zachary and Dylan, and their good friend Garth Herberg, The Janks are a Los Angeles-based trio whose diverse catalogue of musical tastes are reflected not just in their sound, but in their artistic expression as a whole. Dylan speaks to us about how their recent collaboration with a ballet company is a seed for their next creative project, and which classic American rock act is the prime inspiration for their upcoming festive song. 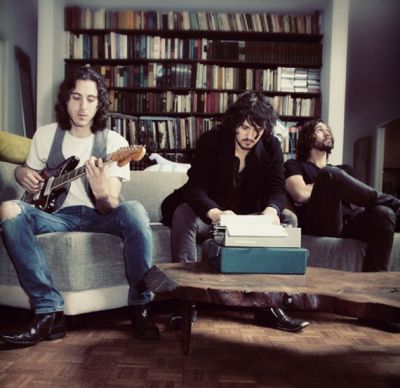 “What I hope someone gets from our show is the impulse to move.”

S] What have we distracted you from right this moment?

S] Now that ‘Hands Of Time’ has been finally released, what are your thoughts on your LP début?

D] “Based on the quality of recording alone, we are proud of it. In terms of aesthetics, it lives and breathes in a different climate than what seems to be popular on the indie music scene in America. Our guess is that it will have a much larger appeal to people in the UK and Australia once we get the exposure.”

S] If you weren’t the musicians who put the record together, would your impressions be any different?

D] “Naturally, my impressions would be different. I’m not sure what I’d think of our record, to be honest, because I’d have to determine who I would be in this hypothetical if I wasn’t myself. Assuming that I was me, but I had no knowledge of the record – let’s say, I made the record and then had a terrible case of amnesia – my guess would be that I’d at the very least appreciate one of the songs because there is so much variation on the record. But I would probably also think that the singer was jacking my style.”

S] How have you found the response from the press and your fans so far?

D] “Maybe we have only been reading the good reviews, but almost every one has had something good to say about it so far. It seems that the critics either think it’s an epic record that squeezes fifty years of rock history into fifty two minutes, or they think that it’s a rather convoluted attempt at doing so. As for the fans, we have received very generous and genuine enthusiasm for what we are doing, but who knows.”

S] You’ve recently put on a show with a comtemporary ballet troupe. Where did the idea to collaborate with the Silverlake Ballet emerge from?

D] “The director of the Silverlake Contemporary Ballet is a friend of mine. By chance, she really appreciates our music and has kindly included us in her vision, which is to create a community of dancers, choreographers, and bands to put contemporary dance to live indie music.”

S] Why a ballet troupe?

D] “The Janks are in the process of writing a Rock Operetta. We plan on having the marriage between dance, music, and visual art for this. Through spending time and working with a dance crew such as this, we have created wonderful relationships with extremely talented dancers and choreographers. Why not a ballet troupe?”

S] What do you hope the audience take from watching the show?

D] “Well, as of now, our live show consists of a collection of songs touching upon varying styles and moods. Projects like our Operetta aim to take that experience to a much higher level, in terms of cohesiveness. With that said, what I hope someone gets from our show is the impulse to move. Whether it’s movement in their seats, movement in their hearts, or just movement out the door. I would prefer for indifference to be reserved for some other artist.”

S] You’ve contributed a Christmas single to a compilation album for a publicity agency. What’s the story behind ‘Silent Knight’?

D] “Not to knock on the numerous campy Christmas songs that bring joy to drunken families all over the world, but we wanted to do a song that was a bit more tasteful. So, in the tradition of The Everly Brothers, we decided to keep it striped and bring the voices forward. If you notice at the end, there is a third voice; that is, the lovely and talented Madison Rene Knapp, aka MR.K. We have the pleasure of working on the Operetta with her since she’ll be playing the female lead in our story.”

S] Will you be incorporating ‘Silent Knight’ or a general festive mood into any of your gigs in the run-up to the Christmas season?

D] “If the environment calls for it, why not?”

S] Can you tell us what else the future holds for The Janks? Have you any current plans to bring your sound over to the UK and Europe?

D] “Oh yes. If all goes well, we should be out there in the spring of 2012. We are hoping the record creates more and more opportunities for us as it gets into the right hands, and we can eventually tour with some great bands out there. Currently, we are finishing the final touches on our new studio, and plan on commencing recordings for our next album. We begin a tour of the American West coast on December 14, our website has all the dates posted of course. Otherwise, just not stopping.”