Event Review: Art Of The Brick

When I was a child, I remember my love of LEGO. The building, the crafting, the completion and finally, the enjoyment of finishing. Unfortunately, like Emmet in The LEGO Movie, I was never able to create something unique with the many pieces I accumulated over the years. So I have to admit, I experienced jealously as well as admiration at Nathan Sawaya’s The Art Of The Brick near London’s Rough Trade. 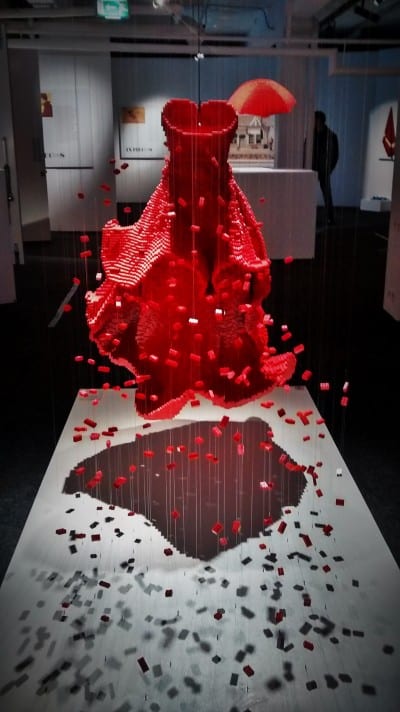 My admiration outgrew my jealousy, however, as I wandered through all the different rooms, experiencing a children’s toy being used as professional art. I was impressed that his artistic process started with LEGO versions of famous artworks such as Van Gogh’s Starry Night and Hokusai’s The Great Wave, then evolved into his current works such as ‘Yellow’ (that one on all the posters) and his newest collaboration In Pieces.

The rooms are greatly aided by Sawaya’s own quotes that are projected onto the walls, yet one message echoes throughout them all; art is a useful tool to help us look at the world and shape our understanding of it. Which is quite true. He even goes as far to say: “Art is not optional”. Because of how our world is structured today, art plays such an important role that no-one can really ignore, even if they tried. Even if you’re not artistic, art is relevant, as is Sawaya. That’s probably why he’s been named one of the most popular contemporary artists of our time.

Throughout his exploration, Sawaya seems to have settled on The Human Form as his artistic theme. However, while pieces like Yellow, Disintegration, etc, exhibit a warped view of Human Form, they also delve into the fears and uncertainties that we all feel in our lives. The fact that sometimes we are the person people want us to be, rather than the person we truly want to be. This idea travels through the exhibit once you’ve gone past his earlier work, and I myself felt moved by it. The cherry on top of this metaphorical cake however, was ‘In Pieces’. Collaborating with photographer Dean West, Sawaya’s newest LEGO sculptures helped specifically depict a sense of identity in West’s photographs based in desolate nature of America’s landscapes. If I was to go to The Art of the Brick for one thing, it would be this. The entire experience and concept was just so wonderful to witness, and the red pixel dress was just utterly magnificent. 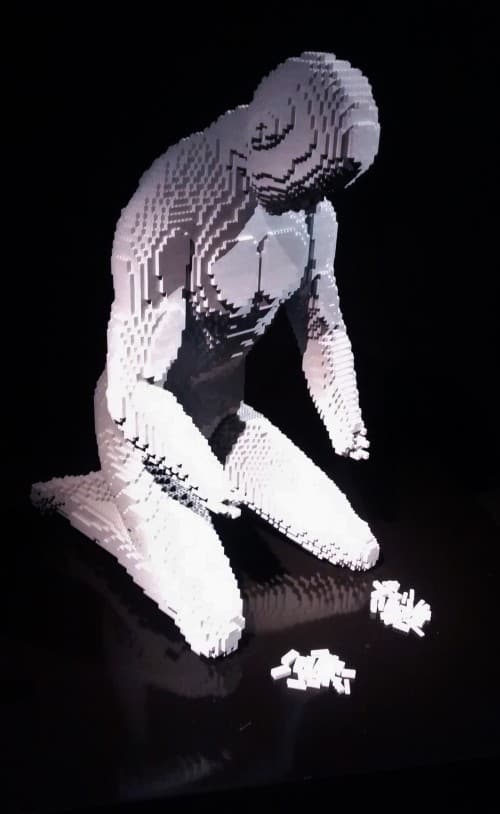 If I had criticisms? The video accompaniments while quite useful when charting his success and practice, could sometimes be distracting. There were two that played in the same room at the same time, and it confuses you, because you wanted to devote your time to both videos individually. Near the beginning, I found that certain pieces were trying to be too obvious or intentionally weird, but they were part of his earlier works, so it can be understood. Also, some descriptions of the work itself while thought provoking and informative, occasionally came across as quite cheesy.

As contemporary art exhibitions go, I was just incredibly happy to witness something new that sparked my interest and inspired me. Honestly, I think the concept is a very easy thing for people to like, because it taps into your inner child. It makes you curious. It’s probably why they have LEGO you can actually play with at the end in the gift shop. His art could inspire another person to explore art through something unexpected. Like Sawaya says in his introduction: “it all starts with a single brick”.