Tonight at The Ringside we have some burlesque. This art form is cultured, inventive, glamorous and cheeky. You might assume at first glance then, that Hull may not be the best city for it, but if you think that’s the case then you are actually mistaken. From our perspective, the city has a thriving scene packed with the best in entertainment, music and culture (burlesque of course amalgamates all three) that appreciates all aspects of the alternative. Hull is alive tonight – the football’s just kicked-off for the World Cup (pun intended), and we are located upstairs in the Ringside and we are getting set to appreciate (for only the second time) this true alt-art form in all its underground decadence. 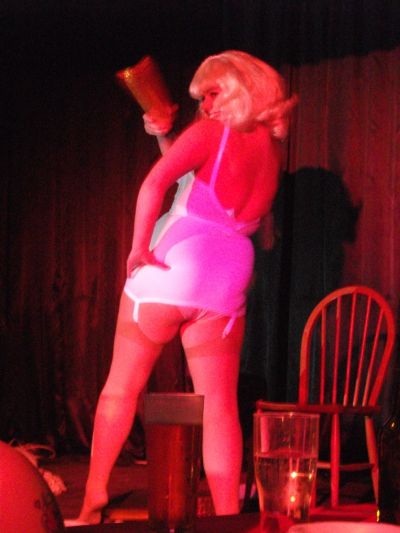 Starting off the night, established local compare Neil impresses us with his solid voice and sharp wit as he runs through ‘classic’ numbers including ‘Suspicious Minds‘ by Elvis before opening act Pinny Lace takes to the stage. Her routine blends just the right amount of class in with expertly executed (and devilishly tempting manoeuvres) alongside a good ol’ fashioned dose of cheek – accompanied by the sounds of ‘Please Mr. Jailer‘ from the ‘Cry Baby‘ soundtrack, we are treated to a seriously fine talent in Lace.

Next up, we are confronted with a local beauty that has a raw and honest approach to the art of burlesque. Penny Feathers‘ classic take on the Rocky Horror number ‘Touch-A, Touch-A Touch Me‘ gets the dedicated crowd in the mood and their support is felt by the homegrown artist who performs with a clear sense of pride, absolute sex appeal and well-deserved confidence – top marks. Feathers is a clear representation of Yorkshire beauty and she carries herself effortlessly with a Marilyn Munroe-esque strength.

The follow-up act also showcases a unique diversity and a talent for all things a little bit left of centre. Duke Wayward is our uncrowned king of boylesque. This guy should be running his own sexy-avant-garde circus back home in Leeds (fitting that his theme tonight should be a metal cover of Britney‘s ‘Circus‘ then?). As the Duke strips down seductively to reveal his vast array of back tattoos and body art (with frenzied support from the crowd), we then get to see something else rather marvellous and ever so slightly freaky – Wayward swallows a proper sword – no, really! The artist’s last act for this half is to swallow a blade down whole – it’s certainly the best trick in burlesque that we have ever seen. Following this performance we are left with a deep sense of curiosity about just how deep he will go with it – the sword we mean, not the man himself, obviously.

Following that, we have another boylesque artist with a penchant for the dark and unusual is Doctor Deviant. Coming on looking like something that you would only dream about in nightmares (or simply steampunk artist Doctor Steel‘s evil twin) this performer starts off wrapped in what appears to be plastic and then sheds that to incorporate feathers into this diverse, movement-based performance.

Peski DeVille hits the stage next and fast becomes our favourite performer of the evening. Her look is simply stunning and her swagger is instantly addictive and attention-grabbing. Through the use of props (her card tricks and, where she places them) alongside her effortlessly seductive mannerisms DeVille wins the crowd over tonight and cements her reputation as one of the Midlands’ (and the UK’s) brightest stars. 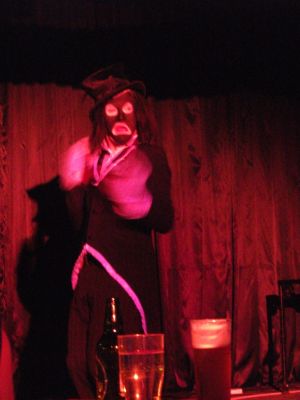 The following routine features transformation, and perhaps un-wittingly showcases the beauty and diversity of burlesque in general. The whole point of the art form, in our opinion at least is to demonstrate the duality that comes with being a performer and artist. As Roxy Twirls takes her seat mid-stage in full workers uniform. Starting off her routine, she is in full worker garb – it’s a little plain to start off with (but then, that’s the point), once the music hits (‘Life In The Fast Lane‘ by The Eagles) and the cap holding Twirl‘s hair is thrown off, a shift of personality takes place – it’s a well thought-out routine and Roxy‘s prowess as a performer is demonstrated perfectly within her powerful movements and striking poses – absolutely stunning.

Next up we have a ‘legend’ of the burlesque scene grace the stage – now, we wouldn’t necessarily believe this introduction based on hype alone (nor the fact that Mister Joe Black tours internationally as a musician and burlesque performer), but the show certainly impresses. Taking over the stage looking like the mutant offspring of Cruella de Ville and Marilyn Manson performing his own demonic version of ‘Hit Me Baby One More Time‘ (after stubbing a lit cigarette out on his tongue and singing a personal number entitled ‘No Butts‘ about erm…bum-sex) Black commands the stage to the delight of his new and established admirers. As one might expect, the artist relies heavily on shock-value and crowd participation to carry his act, draping himself over two volunteers from the audience for a rather dark (but eerily appealing) version of Lady GaGa‘s ‘Bad Romance‘. Again for his last song and to close the first half of the event in total style Black gets the crowd to join in at the chorus with resounding results…nice.

In some reviews, people may question our focus on the compare, but as a local lad, Neil is pretty darn impressive during the interval. His credible renditions of ‘Baggy Trousers‘ by Madness and then (because it’s the ‘best rock song of the 80s’ – agreed), the theme from Ghostbusters. Good work.

Penny Feathers returns again for her second performance next, this time with a baby in tow. Her ‘sexy mum’ bit is certainly a crowd favourite this evening, despite (or because of) the fact that Feathers gets covered in a mysterious brown liquid (most likely chocolate sauce) as she ‘changes’ her plastic prop before stripping down and impressing the excitable (and rightly supportive) audience.

Pinny Lace moves things forward with her routine, making use of the feathers that we saw Deviant use earlier in an elegant display that incorporates an element of cheeky playfulness in with all-around sex appeal. Meanwhile, Duke Wayward‘s second showing is pretty mental – he’s a great performer, but seriously nuts! We think that’s probably why he’s so appealing? Anyway, with the help of his assistant (and Manson‘s cover of ‘Tainted Love‘), Wayward strips down turning from goff bad-boy into…a naked man with balloons. That’s right! From that point on (again, with the help of his lovely assistant) the Duke proceeds to staple the balloons to himself without hesitation like some kind of twisted ringleader (again, this is why we think he should run a circus) before finishing his act to a mixture of applause and gasps. All in a days work for this man we assume.

As the evening draws to a close we are treated to our favourite Peski DeVille who proceeds to try and freak us out even more with her performance, stripping down and lulling the audience into a false sense of security with her sultry ways before laying down on a bed of nails (we did wonder what that was for when she started the set) and strangely, she makes it look easy – beautiful and tough, what more could you want from anyone, really?

After a twisted mad scientist-style double act from Doctor Deviant and Roxy Twirls in which (with the help of a delightful box of props), Deviant creates his own wife (to be fair, with the goggles he’s wearing, we don’t know many people who would date him – possibly a steampunk – anyone?), only for her to get ‘out of control’ (accompanied as you might expect, by some stomping techno beats) and begin to remove her clothes before taking control of him to close the performance and leave the finale to the mighty Joe Black.

Black comes out dressed as Papa Lazarou (League Of Gentleman) which scares us enough, then continues on to perform a tongue-in-cheek version of Britney‘s ‘Oops, I Did It Again‘ after stripping down to his stockings and bra…(yep) to finish off this very strange (but decidedly unique) second half of burlesque madness. As Duke Wayward comes on again and staples a heart into his chest (one goes into the naval…ouch) to express his love for the Hull crowd, we are left feeling like we’ve experienced something special – extraordinary…freaky and very special.

Following the event’s conclusion we caught up with Mister Joe Black to discuss Hull’s burly scene. He said: “I really enjoyed performing – Hull crowds are a lot more appreciative than London crowds and they get involved more.”

Black also commented on the fact that in areas like Hull where exposure is arguably less available, the art of burlesque needs people to support it regularly. He said: “The best way to support the burlesque scene in any area is to nurture it – people need to attend their local event, support the performers and have a great night!”

The woman behind the burlesque event is Anna Fox, she comments: “The Revue was started over three years back, after a drunken conversation regarding traditional cabaret clubs – there’s nowhere in the Hull area you could go for a fun, clean and entertaining night in with friends, partner or both!

“The most rewarding part has to be seeing the audience and performers enjoy themselves. We try to cover as many different areas of burlesque as possible from traditional fan dances to cheesecake and the more macabre gorlesque to cater for all tastes. We seem to be doing okay so far(!) as we have a loyal base of around 100 regular attendees.”

Anna shares her hopes for the future and passionately reinforces her love for the art and for Hull itself. She says: “The most rewarding part [of doing the Ringside Revue] has to be seeing the audience and performers enjoy themselves. We try to cover as many different areas of burlesque as possible from traditional fan dances to cheesecake and the more macabre gorlesque to cater for all tastes. We seem to be doing okay so far as we have a loyal base of around 100 regular attendees.

“Our goals for the future are simple, to keep the night running smoothly for both the audience and performers and to keep burlesque running in Hull! We’re currently the only night that runs on a monthly basis and we work hard to ensure that people are getting value for money and that performers are looked after in a way that makes them want to return.”

While Hull may not be a centre for culture yet, it’s getting there and its underground scene is helping. Long may the Ringside Revue survive and thrive.