Anyone who’s followed the site over the last few years knows that we love a good bit of crossover, genre-bending rock, and electro music – stuff that blends the two? Well, that’s just awesome. Bullet Height are one such band to emerge recently that have our ears and curiosity pricked. With that in mind, we decided to ask Jon Courtney and Sammi Doll about some of their fave electro rock tracks. Nice. 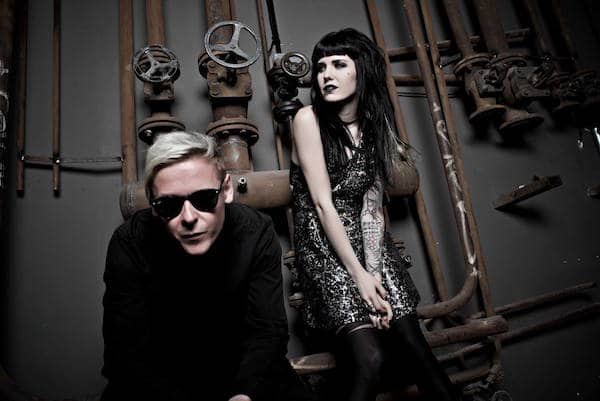 As a teenager I went off them after ‘Siamese Dream’ & particularly disliked ‘Adore’ – the electronic shift confused me. I rediscovered this album years later, fell in love with it. I admire artists that don’t just stick with the same formula/the same old thing. If you stay with safe- that quickly leads to bland. Billy Corgan pushed his creative boundaries, and I really respect that. I select ‘Ava Adore’ – sinister vocal, sexy drum groove & a slinky slide bass!

Gary Numan has so much good material – my favourite album ‘Pure’. It’s an album chock-full of belters. Couldn’t believe it when I found this album – I looped and looped and looped it! Drum grooves, menacing guitar riffs, and ominous synthesizers. He’s a big influence. The track I select is ‘My Jesus’. Whenever I see him live, I go a bit uncharacteristically mental!

Mr. Reznor is a ridiculously talented writer, producer, vocalists, programmer, musician – the list goes on… Did he invent electronic rock? ‘The Fragile’ is probably my favourite record. But, I select “The Hand That Feeds”. Driving bass with a four to the floor, then some slamming guitars and cheeky electronics, plus a great emotion in the vocal.

Depeche Mode – ‘I Feel You’

My brother & I went to see them a couple of years ago, was an incredible performance.

I love so much of the catalogue. Often the tracks don’t have guitar, but ‘I Feel You’ does. So, I guess it classes as electronic rock? Love the slide guitar, electronic elements and the gospel backing vocals that lead the song to its crescendo. The track is topped with a masterful Gahan vocal.

Nothing to do with electronic rock, but the track ‘Pursuit’ rocks so much that I had to include it. If I had the balls to go to Berghain, I could easily dance to stuff like this for a few days. Well, maybe not a few days, but a few hours at least. The album ‘Aleph’ is expertly put together. It includes both bangers and downbeat tracks – interweaved with sleepy segues. I was going to put in Soulwax as my fifth choice, but I just had to mention this track.

Art Vs. Industry – Eat Me Whole

I’m such a fan of everything Avi Ghosh has released, it was difficult to choose which track or project to add to this list, but this one has always been a favourite. ‘Eat Me Whole’ from Art Vs. Industry is a heavier, rock driven outlet who have just revealed a new EP out in October after a massive hiatus… I haven’t looked forward to new music like I do this for quite some time.

This track needs no explanation, with that massive riff. There’s so many elements that make this band great, everything from their experimental dark-electronic breakdowns to catchy vocal melodies. Their sound is cinematically huge.  I’ve had the opportunity to hear the new Loser’s album that releases later this year … it does not disappoint!

It was difficult to pick just one track off ‘Darkest Days’, but in the vein of electronic rock, this song has a perfect balance. ‘Darkest Days’ is an immaculate album start to finish.

Any chance I get to talk about Metric, I will. I love this band. Although it’s one of the more mellow rock choices on this list, the way this band has evolved is inspiring and always remains a top contender for my music attention.

This is one of the more aggressive tracks from IAMX from the album ‘Kingdom Of Welcome Addiction’. IAMX no doubt, is always full of emotion; but this track in particular does it for me to complete this list with the intense, dynamic electronic build and forward thinking subject matter.