As The Knife, Swedish brother-and-sister duo Olof and Karin Dreijer Andersson have dealt in sometimes unsettling, sometimes romantic, but always enigmatic synthpop for a decade now. Three years ago, their ‘Silent Shout’ album saw them leave behind the warm, ‘80’s-inflected pick’n’mix pop of 2002’s ‘Deep Cuts’ to give unsuspecting listeners something aurally equivalent to sex-repressed members of the Evil Dead demon-possessing old-school synths and drum machines.

Their artfully concealed public image during this period of heightened popularity added to their mystique, and having played only a handful of live shows (generously documented and given away on DVD/CD as part of the essential ‘Silent Shout Special Edition‘) their exponentially growing fanbase grew rabid (that word being the appropriate title of their record label) for follow-up releases and a more widespread tour.

So it was with some surprise and inevitable disappointment that the band announced a three-year hiatus for Karin to have a child (her second). As it turns out, fans needn’t have worried – Olof’s NIN ‘Year Zero‘ remix withstanding, this decision has yielded an unexpected and life-affirming treat: Karin’s solo side-project Fever Ray. Just in time for last Christmas, the name was confirmed, some artwork released and the first single was unleashed online – ‘If I Had A Heart‘. A churning, insidious experience, building on funereal organ chords and a Knife-esque, deeply pitch-shifted vocal, the song gave listeners one of the purest blasts of Karin’s piercing voice yet, and an effortlessly haunting, shamanic melody to drift us off into nightmare-land. The accompanying video reflected this perfectly – children on a boat in the night, drifting through towering reeds towards a body-strewn mansion, reminiscent of the day after the party in the film ‘Eyes Wide Shut‘, with Karin appearing halfway through plastered in voodoo skull paint, her voice visually offset by her lips barely moving. 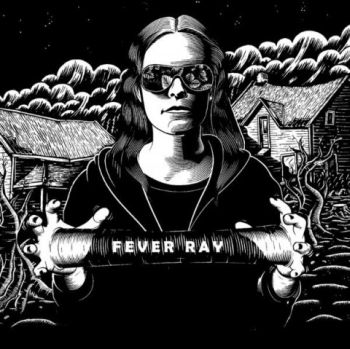 It was a startling introduction to this artist’s new entity – even more so given that it didn’t rely on The Knife’s floor-friendly beats. It also serves as a suitable introduction to the self-titled Fever Ray album – as the first track it is satisfyingly familiar to some of Silent Shout’s most downbeat, disturbing songs, as well as hinting that Karin is baring her soul more than ever before (‘If I had a heart I could love you’) and invoking the curious pains and perspective of childhood (‘Dangling feet from window pane, will they ever, ever reach the floor’). The second single (and second track) ‘When I Grow Up‘ built upon these aspects, Karin’s voice coming through clear from the start, Bjork’s enunciations blended with Cyndi Lauper’s pipes (the latter being one of her cited inspirations on her MySpace page).  Although the song (and video) has a more optimistic tone and accessible style (with accumulating beats, gentle guitar and Orient-echoing synths), its portrait of childhood fear and longing still bears lyrical barbs for the listener to dwell upon (‘Last night I drew a funny man with dog eyes and a hanging tongue’, ‘I never like that sad look from someone who wants to be loved by you’).

The fluctuating line between Karin as child and mother powers the whole album, as she strives to understand both roles, filtered through her experience with and observations of her own children. Songs that may initially underwhelm musically become standouts as Karin’s lyrics fall more clearly into focus: ‘Dry And Dusty‘ gives a heart-achingly direct account of her attitude towards what she is and does (‘Work as I’ve been told, in return I get money, small feet in the hall, and I long for every moment’), while the trip-hoppy ‘Concrete Walls‘ depicts her sleep-deprived post-natal struggles through somnambulistic music and the album’s most distorted vocals (‘Eyes are open and mouth cries, haven’t slept since summer’). The epic final track, ‘Coconut’, perhaps hints at her longing to return to work with her brother as The Knife (‘He came back one day, told me stories that I now dream of, open atmosphere, take me anywhere, take me there’). Rolling in over NIN-y synth stabs and culminating in one of the album’s most addictive chorus melodies, it’s both a chilling and somehow soothing finale to what I have grown to believe is the hands-down album of the year.

The album’s greatness becomes even clearer when witnessing it performed live. Karin’s year of frenzied Fever Ray-related activity (four singles, four videos, umpteen remixes) has been topped off by some of the most memorable live shows of recent times. Having been lucky enough to see Fever Ray in the flesh twice this year, I can testify that it is an otherworldly experience. The five-strong band wield various live and electronic instruments, generating a menacing sense of voodoo ritual through their evolving costumes and make-up, while the stage design and light show have to be seen to be believed (you will be transfixed by the lasers – I challenge you not to try to reach out and touch them like a kid in an upside-down aquarium). Karin’s voice seals the deal – hitting high and low, it is the essence of Fever Ray, at times warm and tender, at others strained and frightening. It may be short – every song from the album is played along with two surprising covers – and Knife fans could be disappointed by the lack of their songs and beats in the set, but there’s nothing else like it. Her many fans have one final chance to witness her in this guise – she has said that her upcoming tour will be her last as Fever Ray, with Olof finishing up his duties writing and performing an opera inspired by Darwin(!).

Watch the video for ‘When I Grow Up‘ below: