Blog: What Is It, To Be Human? – Homelessness

It is well known, however, not well understood. Therein resides the issue – a large problem worldwide and more specifically, right under our very noses, in York – that too many poor souls are forgotten about, and fall by the wayside. In this day and age, we should be looking to band together and conquer the hard times, not isolate ourselves, burying our heads and selflessness firmly in the sand. 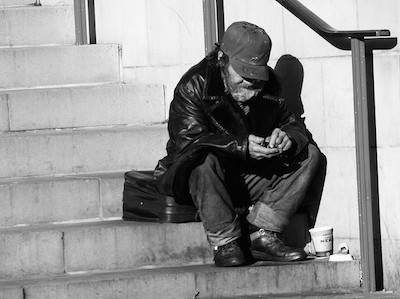 Responsibility is the focus here, who exactly is responsible? Often the afflicted person is tarnished with the once-over statement of, “Oh, it’s their own fault”, with either a snigger in-tow or an upturned nose flash, neither the appropriate response of empathy towards a fellow suffering human being. We know not to settle with the initial doubt, as there is nearly always more than meets the eye, we don’t know their personal backstory, who could/would?

It begins from the “top” down – despite being in a capitalist society which inevitably breeds that dog eat dog mind-set – it starts with the politicians, the council leaders, the people in power with the position and ability to affect real change. It is within their grasp to identify this as real issue, and make steps to move forward, ie. providing more affordable housing (to touch just the tip of the iceberg); however this then brings in the wage debate also (minimum wage vs. cost of living), showing that this is a problem that spans multiple areas, which in turn leads to many reasons why one may be relegated to the unfortunate position of homelessness.

In 2015, it is high time that we as a race become more observant, and do more to help others. Tough times are upon us, there are still economic troubles in this country and much more could be done to make things easier for us all. The gap between the rich and the poor is ever-growing, and it is in that gap, that a multitude of people end up losing out – those who have difficult times are left to fend for themselves, resorting to them leaving or being removed from their homes.

Mental health is also a prevalent issue here that all too often crosses over into one of the crucial factors immediately before a person becomes homeless. Still, not enough is done in York to provide free mental healthcare for those in need, a real crying shame for humanity – where is the togetherness and shared responsibility? It is in those dire times that people could really do with the help, the breaking point that could be prevented with a comfortable, trusting environment where people know they can go to get that support they so desperately need.

The topic really does highlight many of the problems we as a society currently face on a greater scale; the lack of positive energy given out to others; the gruelling living costs that only go up, to be met with wages and contracts that rarely affect them rising costs fairly; the debate on who is responsible for the welfare and safety of the homeless population – all too often do they get lumped on their own and expected to get back on their feet by themselves with little, to no assistance. It seems to be council workers and good Samaritans in general that pick up the pieces, going out of their way and giving out extraordinary positive energy to help.

In retrospect, there are clear things everybody as fellow humans could be doing, but I believe it is in the acknowledgment and through the collective effort, that an issue as insurmountable as this one can only be achieved – we need to rally together, listen to and understand one another, so as to affect change for the better in our lives.