Due to the coronavirus pandemic, Marvel have been very quiet for a few months, so we here at Soundsphere Magazine have decided to take a look back at the top ten Spider-Man artists of all time. This list is by no means exhaustive, and is just our opinion. There are plenty more artists out there who have contributed to the Web Slinger’s pages, all of which deserve a spot in the limelight. For now, though, here are our top ten.

In at number ten, we have legendary artist Tim Sale. Sale, probably most known for his work on the television series ‘Heroes’ and his other collaborations with Jeph Loeb at DC Comics, had a very short but absolutely perfect story starring our favourite web-head. Spider-Man: Blue fits in nicely alongside Daredevil: Yellow, Hulk: Gray and Captain America: White, as well as DC’s Haunted Knight, Long Halloween, Dark Victory, Catwoman: When in Rome and Superman: For All Seasons, all of which by the same creative team of Sale and Loeb. 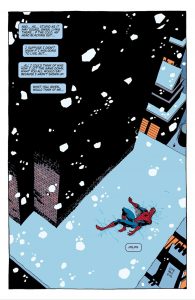 No-one has captured the emotional roller-coaster of Peter Parker’s love for both Gwen Stacey and Mary Jane Watson quite like Loeb and Sale did in the 2002 limited series ‘Blue’, and this is largely to Sale’s unique style. We don’t wish to spoil ‘Blue’, but quite frankly, it’s one of the greatest Spider-Man stories ever penned. It’s not groundbreaking, it’s not very long, but it is perfect and should be on everyone’s list. The fact Tim Sale has done so little work with Spider-Man and is on this list shows just how incredible an artist he is.

in ninth place, Italian artist Sara Pichelli made her break in comics working for IDW. Marvel recruited her in 2008 in her mid twenties and put her to work on NYX and Runaways, eventually promoting her to Ultimate Comics: Spider-Man. Pichelli contributed to 2011’s Ultimate Fallout, where she illustrated the first appearance of Miles Morales. 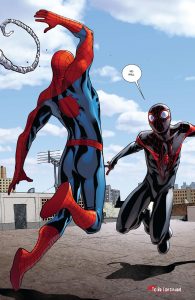 The final page of ‘Spider-Men’, a crossover between Marvel’s main 616 universe and the Ultimate universe. Miles Morales meets the 616 version of Peter Parker, alive and well.

Pichelli’s unique, almost “cartoonish” style helped bring a fresh audience to the Ultimate universe at Marvel, and cemented Miles Morales as a permanent fixture to the lore of Spider-Man.

Italian artist Mike Wieringo takes our eighth place. Wieringo tragically passed away in 2007, at just 44 years old. He left behind an incredible legacy, perhaps best known for his runs on DC Comics’ The Flash and Marvel’s Fantastic Four. Wieringo’s short runs on ‘The Sensational Spider-Man’ and ‘Friendly Neighborhood Spider-Man’ marked his place as one of the best Spider-Man artists to date and a firm favourite among fans. 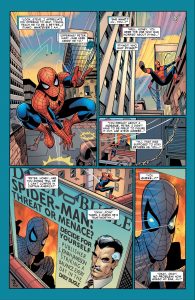 Wieringo’s Spider-Man defined an era, along with John Romita Jr, Mike Deodato, Pat Lee, Terry Dodson and more. ‘The Other’ set the stage for what the multitude of Spider-Man titles could accomplish, leading to Mark Millar’s Civil War.

At number seven, we have Gil Kane. Kane was recognised as one of the best artists and writers of his day, with a huge body of work with both Marvel and DC Comics. He is best known for his Superman stories but perhaps his most famous story of all is his controversial 1971 arc ‘Green Gobin Reborn!’, written by Stan Lee. 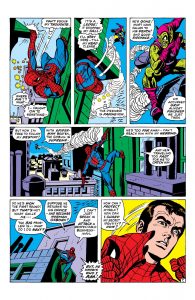 The Amazing Spider-Man #97 page 7, written by Stan Lee and illustrated by Gil Kane.

Speaking of Romita Sr, the Punisher and Wolverine co-creator takes our sixth spot. Romita Sr took over from Steve Ditko when he abruptly left Amazing Spider-Man, pencilling his first issue #39. As previously mentioned, Romita helped define Spider-Man’s look for the decades that followed his tenure. Initially shy mimicking Ditko’s unique style, Romita soon developed his own style for Spider-Man, before becoming the ‘art director’ for all Marvel projects. 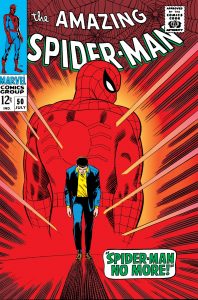 Romita Sr. helped shape Marvel into the company we know today. When Steve Ditko left Spider-Man, the character was nearly dropped by Stan Lee’s decision to place Romita at the drawing board for the line proved to be one of the greatest decisions he ever made.

It is impossible to mention John Romita Sr. without too mentioning John Romita Jr. The son of Romita Sr, Jr had big boots to fill. Romita’s style has proven quite controversial with fans, with his later work with DC often described as “lazy”. Romita Jr.’s probably best known for his work on Kick-Ass with Mark Millar, but his best work is easily his run on Spider-Man, with J. M. Staczynski. 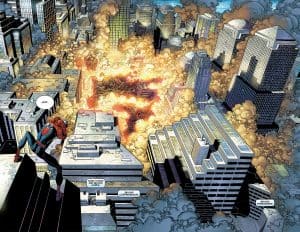 The opening splash page to Amazing Spider-Man volume 2, #36 December 2001) depicting the tragedy of the 9/11 attacks.

No-one, not even his father, has quite matched the gritty, street-level portrayal Romita gave Spider-Man. His father’s style is a clear inspiration, but Romita Jr somehow transcends the incredible artwork before him, crafting something very unique and visually stunning. December 2001’s issue, as depicted above showcases just how truly amazing Romita is.

Romita’s Peter Parker was a mature adult, teaching in a school, trying to fix his marriage and facing huge changes to his alter ego’s mythos. Romita effortlessly portrays deep emotion in Peter Parker’s expressions, and raw action in Spider-Man’s flexibility.

At number four, we present Image co-founder and Savage Dragon creator Erik Larsen. Larsen illustrated a handful of issues before taking over Amazing Spider-Man at issue #329, after the legendary Todd McFarlane. Larsen’s stories with writer David Michelinie, such as ‘The Cosmic Spider-Man’, catapulted Spider-Man into truly being the flagship character and title for Marvel in the late 80s. After leaving the title at #350, Larsen would later return to Spider-Man, this time replacing McFarlane on the 1990 series ‘Spider-Man’. Larsen continues to be regarded as one of the artists most closely tied to the character. 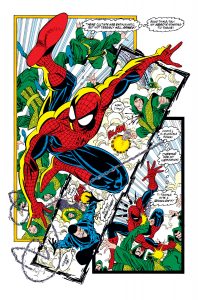 Todd McFarlane’s contributions to Spider-Man are iconic in every sense of the word, McFarlane also boasts being the best-selling Spider-Man artist of all time as well as the sole creator of the ever popular Spawn and co-founder of Image Comics. 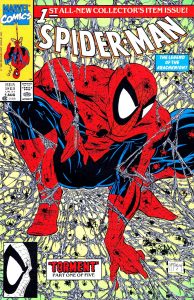 Spider-Man #1 from 1990, cover by McFarlane. The issue that sold over two and a half million copies and single-handedly started the ‘comic book boom’ of the 90s.

Todd McFarlane is to Spider-Man what Frank Miller is to Batman, McFarlane took Spider-Man into unprecedented levels of darkness with extremely intricate levels of detail and a unique, instantly identifiable Spider-Man. Everything, from the webbing on his costume to the almost Gibbons-like background details, there is little wonder McFarlane is so highly regarded as one of the top artists of all time.

Mark Bagley is synonymous with Spider-Man, having illustrated the character  with very little break between 1991 and 1996 on the flagship title, then illustrating the character in the groundbreaking Ultimate universe for a whopping 111 issues straight. Bagley only intended on pencilling the first arc in the Ultimate universe, but ended up for over a decade, pioneering the hugely successful series with Brian Michael Bendis. 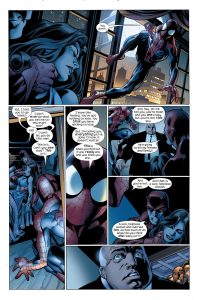 A page from Ultimate Spider-Man #110, showing Bagley at his finest.

Bagley’s Spider-Man was more constrained than McFarlane and Larsen, and more accessible to readers. Bagley’s second run, Ultimate Spider-Man, spawned its own cartoon and videogame, as well as its own full universe which was later expanded upon by Mark Millar, Bryan Hitch, Jeph Loeb, Brian K. Vaughan, Robert Kirkman and many more. Bagley’s Spider-Man is truly symbolic, vividly representing an entire generation and an entire ‘universe’, in one unique style.

Finally, at number one, Steve Ditko. Ditko wasn’t Stan Lee’s first choice to illustrate Spider-Man, but he ended up being the right choice. Flashing out the name “Spider-Man”, allegedly all he was given to work with, Ditko created (Co-created? Created? More on this, one day) the Amazing Spider-Man. In some ways it’s a shame Ditko left after little over three years of issues, in others “less is more”. Ditko, also the co-creator of Dr Strange, was decades ahead of his time. Utilising perspectives and styles unheard of in the Silver Age of comics, Ditko has long been attributed the moniker “pioneer” of modern comics. 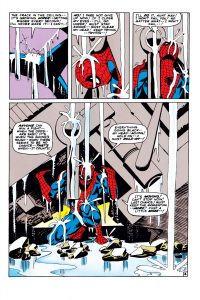 From Amazing Spider-Man #33, plot and illustration by Steve Ditko, words by Stan Lee. 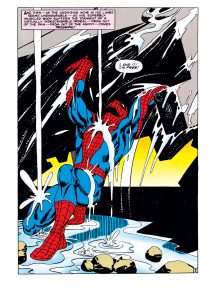 Steve Ditko designed the distinctive costume as well as many other characteristics of the now famous character and his cast of characters. Some of the Silver Age issues of Spider-Man can be a bit of a slog to read today, but the artwork by Ditko and the energy displayed on the panels are exemplary and unique. Spider-Man would not exist in the way we know him without Steve Ditko, and millions of fans, readers, writers, illustrators, producers, actors, directors, screenwriters and so many more owe Ditko a great many thanks. 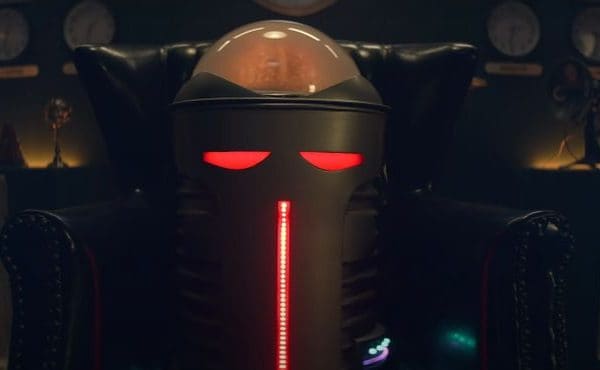 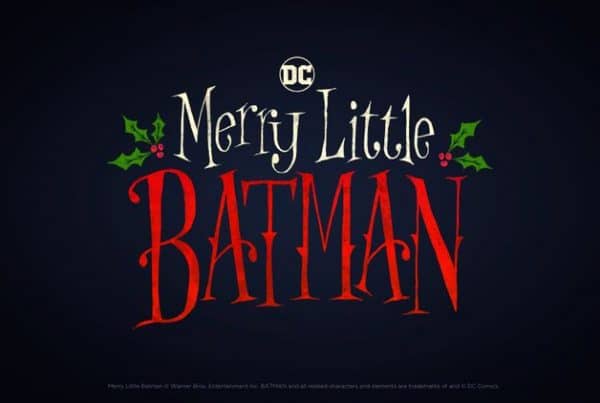 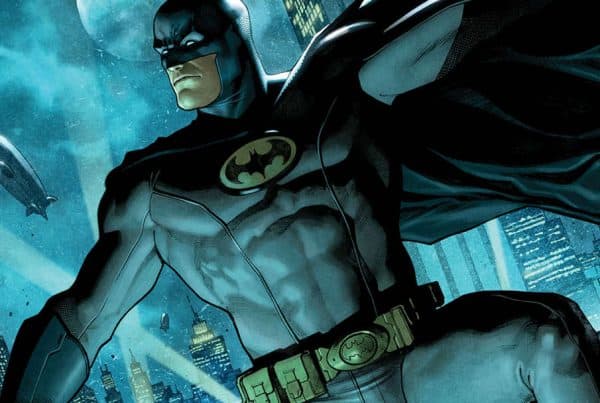