Here we have a 8 bar solo incorporating both the previous lessons and developing the techniques in to something more musical. We start with a 2 bar phrase that involves bending up from the fifteenth fret of the B string from a D to an E using your third finger. Then back going down again to the D note pulling off to the B note at the twelfth fret on your first finger, then bending up again from the D to the E at the fifteenth fret using your third finger, and adding vibrato. 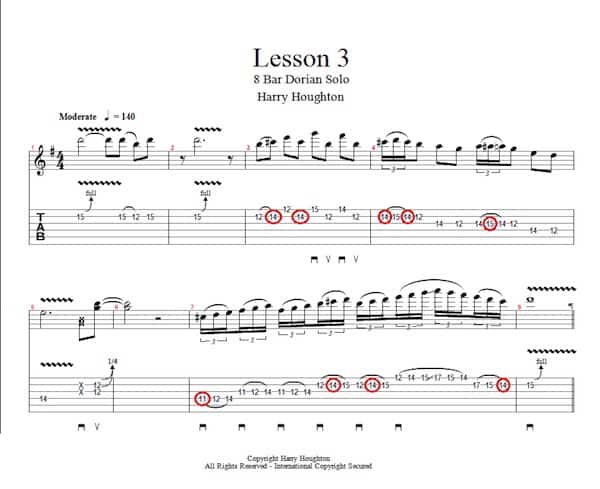 Now we have a lick which uses a triplet hammer on and pull off using the first, third and fourth fingers on the twelfth, fourteenth and fifteenth frets of the B and G strings incorporating both the C# and B flat notes. They are separated by 2 eighth notes going from the A to the G on fourteenth and fifteenth frets of the G string, and rounded off with the E and D notes at the same frets on the D string. We finish this section on the E at the fourteenth fret of the D string on the E note and adding vibrato before performing a double stop using the first finger covering the G and B notes on their respective strings at the twelfth fret and bending approximately a quarter tone. This is made more exciting by playing and muting the string an eighth note before and plucking these notes with an upstroke.