Following on from last month’s tapping lesson, we will continue the tapping theme with some rising diminished arpeggios. A diminished triad consists of three notes all spaced exactly 3 semi-tones apart, and in this case we are using a diminished seventh chord. So the intervals we are using will be a root, flat third, flat fifth and a diminished seventh (enharmonically a major sixth) in the key of E minor. So the notes we will be using will be E, G, B flat and D flat. As these intervals are all equally space, any of the notes could be the root but for these purposes we are using E as the root note. 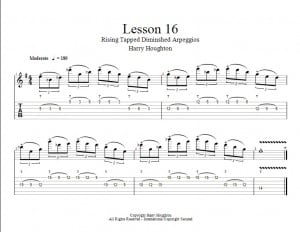 This entire pattern is based on triplets using the G and high E strings, and you first and third fingers on your left hand and as always tap with your second finger on your right hand. Firstly, tap the E note at the ninth fret of the G string and pull off the B flat at the third fret and then hammer on to the D flat at the sixth fret. Then repeat the same pattern at the same frets on the high E string through the D flat, G and B flat notes. Then tap the ninth fret and pull off down to the sixth and then the third fret.

We then simply move this pattern up 3 semi tones to the twelfth, ninth and sixth frets, and again to the fifteenth, twelfth and ninth. Then finally to the eighteenth, fifteenth and twelfth frets before hammering on from nowhere to the E at the fourteenth fret of the D string with your third finger and adding vibrato.