Today we sit down with vocalist and mandolin  player of humble folk band The Bad Shepherds, or for those of you who are unacquainted with this fine group, Ade frickin’ Edmondson [Bottom, The Young Ones]! Behind the legendary comedic portrayals is a very pleasant man, a joy to chat with. We talk to him about his inspirations, the band, career advice, and small amounts of his day to day life. 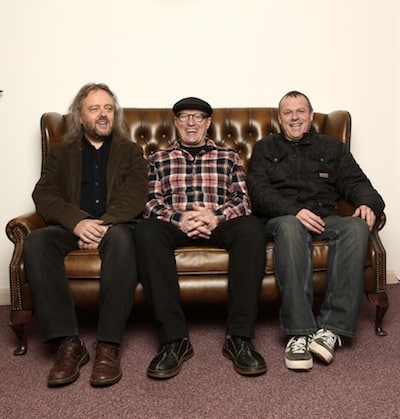 So what does Ade get up to on an average day? “I don’t think I’ve ever had a typical day,” laughs Edmondson. “Weeks are very different from each other. This week it’s the band, last week I was plucked out of the water from an RAF helicopter for a documentary about the sea.”

Not so much downtime then, it would seem, just a lotta cool things happening. The motivation for these activities couldn’t be simpler either, as Ade sums up in a single sentence: “I tend to not do the things that I don’t find any fun.”

The new album, entitled ‘Mud, Blood & Beer’ is due for release later in the year. We ask what the thought process behind it was. Before the recording process began, there were doubts about whether the band would continue: “We got to the end of 2011, and we thought let’s take the year off and see where we are, and when we did the last gig there was a feeling that it might be the last time we ever played, but half way through we realised it was just too much fun.” We’re certainly relieved that it wasn’t the final gig, and even more grateful that ‘By Hook Or By Crook’ wasn’t the final album, and it seems that with revaluation comes re-imagination: “This album is more diverse than the others. We’ve chosen some strange source material.”

Putting your own material out there certainly requires a degree of opinion on the music of nowadays, so it’s great to hear that Ade feels strongly about it: “Everything theses days is based around the word ‘I’, you don’t get any people writing protest songs anymore, or songs about what the world is like, it’s a real shame.” Maybe that’s why Bad Shepherds cover punk songs. “I’ve always wanted to be a musician, and I’ve finally found this avenue to practice in, and I’m absolutely adoring that, and moving to songwriting is the way forwards.” Reminiscing about the good ol’ days, Edmondson says, “In Manchester there used to be a venue called ‘The Squat’, and in that 70s era there were hundreds of punk bands, most of them only survived a week. Watching the pure creativity was what inspired us to do our thing, we didn’t have to do what everyone had done before. You didn’t have to be supported by EMI to make music. That was what really struck me at that time.”

The band returned to tour Australia recently, how does Ade feel about that aspect of music? “I love touring. But planes are really boring. Australia was hard work ‘cos it’s a fuckin’ big country. You’re just touring airports really, it’s a lunacy.”

It’s safe to say that travelling is universally despised at the worst of times. Sound advice from an independent musician on the other hand, can never be. “In my day you had to come from London to make it, but the world’s much more in touch than it was, you can do things from anywhere these days.”

Ade has some strong opinions about this as well. “I genuinely think anyone with real talent will get there, if anyone’s really got it they will rise. There’s just so little real talent around.” And possibly the most thought provoking statement of the entire chat: “Trying to get there is more fun than getting there.” Ade Edmondson is one of those respectable people who only does it for the pure thrill. “I mean The Bad Shepherds is a niche band, it’s not a huge successful big label band. We’re a tiny little concern.”

For a tiny little concern, this band have garnered a vast wealth of experience, and amongst that, some incredible times. “Beautiful Days festival near Ottery in Devon and playing the Aavalon stage in Glastonbury – best moments of my life. I don’t know what happened at those gigs but they were just immense. I remember coming off the stage at Glastonbury – we just started crying, it was just very moving. Everything was just extraordinary.”

That surely can’t be traded for all the mainstream success and cash in the world.