36 Crazyfists are renowned for their intense live performances and they have been a favourite for UK metal fans and gig-goers for many years. Having recently begun the European leg of their tour with DevilDriver, last week we thought that it would be a great time to catch up with vocalist Brock Lindow while he was still in the UK to talk about the band’s latest record, new inspirations and the impact of his band’s music on its followers. 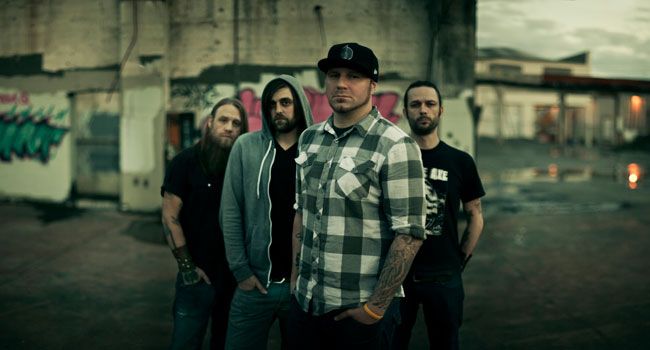 “The last album was an exorcism for me”

S] How has the tour been so far – how have you been getting on with DevilDriver?

BL] Everything is going good. It’s great to be out with them. We are having a lot of fun. The dynamic is really cool. We are having a great time here in the UK, we only have a couple of shows left and then we move on to Europe. We are getting fired up.

S] Your are obviously playing some bigger venues right now, but we have seen you play smaller cities like York before – how important is it for the band to get across to many different cities in the UK and smaller areas rather than just Manchester and London?

BL] We always said that the tour was so much fun when we did 27-or-29 shows in the UK a while back. We got to go to all of these small towns and these cool places where they would smash 300-to-400 kids in a venue – I think that there is a lot to be said about doing those kinds of shows where you are able to have this real connection with people. That’s something that our band is a little bit more in-tune with and I think that it is actually something that we prefer in comparison to doing major festivals, although it is always a great honour to be invited to those and we have always been thankful. I think it is important to play those smaller spots every once in a while just to keep that ‘old-school’ feeling.

S] Can you tell us about some of the biggest challenges that you faced during the recording process for this album?

BL] As the years have gone on it has been a challenge to produce something that keeps us relevant and makes sure that we are not repeating ourselves as we keep on going in this business. For me though, I had previously put out these records that were mostly about a victory through struggle and with this album, I wanted to positively address some of the things that I am still dealing with in my life, bettering myself and moving away from these mistakes that I have made. I mean, we all do that as humans, and it’s nothing too graphic, but perhaps for me – drinking a little too much, and not remembering my responsibilities at times. I was trying to address some old things and help myself out through that writing process.

S] Do you feel like you are ready to move forwards now?

BL] I am ready to go forward for sure. I think that when you are exorcising these things it is still a work in progress. I am outlining them and making myself aware of them and now, the real work begins! That is still something that I am working on, and I think that writing these songs has definitely helped me realise what I need to do. So, it’s an exorcism of sorts for me.

S] What about working as a three-piece, what have been some of the most positive things about making that move when recording?

BL] For me, it was exactly the same process as always. Steve [Holt] our guitar player, also did the bass track and that was a little bit more work for him. As far as the writing is concerned, nothing really changed. It has always been Steve and Thomas [Noonan, drums] who have written all of the music this entire time, and I have always done the lyrics. So, the writing didn’t change – just that one extra piece. Steve had his plate pretty full though – he played guitar, bass, recorded and produced – he was pretty busy! That was the only really big difference this time.

S] ‘Trenches’ is our favourite track from the record – what did you want to achieve with that track, lyrically?

BL] That track is my reminder of a time when I was in a drug-induced haze during my 20s and staying up for days being completely reckless with my mind and body! It was a dark time for me and so, that song is about an addiction that I was involved with.

S] Do you think that there is one song on that new record that defines the state of 36 Crazyfists as a whole?

BL] [laughs] I don’t know about one song because each one has its own story and life. I guess that if I had to sum up the whole thing. The opening track ‘In The Midnights‘ is a song about these certain struggles that I was involved with, and over the entire life of this band, I have been dealing with certain things and I have had to become aware of these problems. That song really does sum up exactly what I was trying to get across throughout the entire writing process – it’s about addressing these issues and ‘owning’ them and taking responsibility. If I could pick any song out that encompasses the message of the record as a whole, then that one would be it.

S] You’ve said before that this album is about dealing mistakes and learning from them to move forward, what song do you think best communicates that to your fans?

BL] For sure, there is a song on the album called ‘Anchors‘ that is about the importance of friendship and how I have needed my friends to help me out in dark times of my life. Absolutely, I think that ‘Anchors‘ could be one of those songs where kids could look for inspiration or things that could possibly help them and their life, through our band. It did that for me.

S] Was it your intention to write a record that might speak to people and inspire them to escape their own dark period?

BL] Through the band’s entire career, fans have said that certain songs have helped them, and while I was never initially intending them for anyone else other than myself, but it is certainly rewarding when kids come up to me and say that. It is an honour and that is the power of our music.

S] What did you want to achieve with the artwork for ‘Collisions and Castaways’ and what that communicates?

BL] I did have a little but of input! I told the artist what the concept behind the lyrics was – that I was trying to pull some things out from ‘under the rug’ and address certain things. He came up with the treasure chest and inside that there’s supposed to be all of these bad secrets. I really like the imagery and the vagueness of it all. I write that way because I like things to be open for the listeners’ interpretation. It really sits well with the band.

S] What is your biggest personal inspiration as we approach 2011?

BL] My wife and I had a little girl a year-and-a-half ago and I am a father now! Things are different in my life. I am inspired by the fact that now, I have to be more thoughtful as an adult and take care of my responsibilities and things of that nature. It has really helped me to straighten my life out by having these awesome new aspects come in! So, I would say that my daughter has helped me to grow up a bit!

S] Do you have a specific place that you like to write – where do you find your ideas?

BL] I’ve got a little office in my house that I like to go into with a desk. Everything is neatly organised and I can listen to music, I’ve got the net and everything I need. I have all kinds of inspiring thoughts in there and it’s definitely my most comfortable place. I’ve written the last three albums in there.

S] What’s next for the band?

BL] We’ve been out since May. We will finish in Europe on December 5 and then we’ll be off until February which is going to be nice to get a little break to spend time with our families and then in Feb, we will go to Australia and start the touring machine back up. I am looking forward to the time out. At the same time I am happy to still be working. This will be our seventeenth year as a band come December and so, for all the things we have done, I am glad that we are still kicking around as old as we are now! [laughs]

S] Your random question now, in the event of a zombie outbreak, what weapon would you choose to defend yourself and why?

BL] It would have to be a hockey stick because I have plenty of them in my house. They are light and you can do some serious damage!