It’s been a long and winding road for legendary symphonic metal band Nightwish. Having replaced Tarja Turunen, described as “the finest operatically trained singer on the planet”, Tuomas Halopainen and crew had their work cut out to fill her shoes. 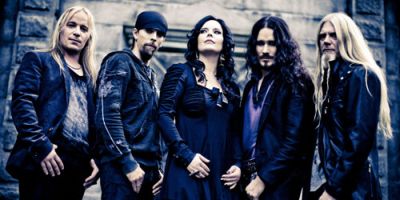 Of course, they discovered Anette Olzon and from that point, the band have fought hard to get from rock bottom (the bottom being death threats…) back to the top of metal’s golden pedestal where they belong.

As you listen through the CD, each track makes the whole effect of the album more intense. If you think ‘Dark Passion Play’ was the best Nightwish had to offer, then we think that you will have to seriously reconsider. It’s just that good. So yeah, if you like a combination of outstanding metal, spectacular orchestral arrangements and flawless soprano vocals (which you should, because you’re reading this…) then this album will be for you.

What’s it all about then? Well, this is a concept album comprised of songs that tell the tale of an old composer who revisits his childhood while on his deathbed. Fortunately, no two tracks on this album sound the same but to hear them in sequence as a combination is a more epic experience than you can imagine.

There will be a digi-pack release of two CDs, the second disc has each track in its instrumental form so you can appreciate the record from a different perspective. The album is meant to make its listeners think and question things around them and it certainly does that for us.

The album opens with a lullaby, beginning with subtle notes from Marco Hietela (vocals and bass). It is sung in Finnish and has a totally hypnotic effect on the listener. Not in any negative way though, you’re not going to be compelled to walk off a cliff or anything, but as expected it truly does bring you out in goosebumps. There’s a definite theme of self-realisation under-cutting it as well.

The first single release is titled ‘Storytime’ and it fires off with the type of punchy riff and melodic chorus that we have always come to expect from Nightwish and Tuomas hopes it “will blow the roof off your mouth”. The track with the most promise is the title track and final offering on the disk, ‘Imaginaerum’, packed full of Celtic sound and atmospheric melody; it’ll take you to the shores of Scotland.

The album has a well thought-out mix of soft melodic tones that’ll soothe, evoke and inspire as well as the heavier sound that long-time fans will no doubt associate with ‘Dark Passion Play’, meanwhile, ‘Arabesque’ sees Nightwish explore a range of multicultural influences to great effect.

Working alongside orchestral legend Pip Williams, the band have once again smashed any preconceptions by creating an album so varied and emotional that it will doubtless defy genre classification and pigeonholing.

The tracklisting for ‘Imaginaerum’ is below:

‘Imaginaerum’ will be released in the UK on Friday December 2, 2011