By Editor May 6, 2020 Features, Interviews
No Comments

How are you doing at the moment?

I’m getting by considering everything that’s going on in the world lately. Being forced to stay inside is good for my art productivity so that’s a silver lining in these dark times, eh?

What inspires your work, think specific people, places and movies for example?

Well, the obvious ones are anime and comics. I would also say the classic 2D animated Disney films, martial arts films too – mainly starring Jackie chan. Urban environments and street art deserve mention. Any style with a bold outline and bright colours is always appealing to me.

I should say the cliché…that my life influences my comic work a lot, it’s easier to produce something passionate if you keep close to you, I guess. As for Comic book influencers in detail, firstly got to say Bryan Lee O’Malley’s Scott Pilgrim – that showed me you could mix relationship comedy and drama with a retro gaming style universe, and make it work.

I’d also say the Watchman because what comic book fan would I be if I did not mention Alan Moore and Dave Gibbons’ beast? It’s got clever panel layouts and a lot of details in the universe they created. If it were not for this, the comic industry would not be what it is today.

Comic artist wise Frank Quietly – he just a master at panels and not afraid to do interesting experimental layouts. I love the way he designs sound effects in his pages blending them into scenes – it adds such creativity to his style. I’ve been trying to do that in my pages, but not succeeding at the moment.

Juan Díaz Canales is another. He used to work as an animator for the French Disney Studio and you can tell. His comic series Black Sad had so much expression and movement with its anthropomorphic characters. There is a lot of little details in his clean realistic watercolour’s backgrounds. I always go through his comics for references on facial expressions.

Greg Capullo has been an influence since reading the Spawn comic as a teen in the 90s, and recently with his Batman run with Scott Snyder. Great, gritty bold black lines and a distinctive style.

Sam Kieth’s who did the cult classic The Maxx. Very experimental, slightly surreal art that made for some interesting pages. It dealt with a lot of psychological themes and wasn’t scared to be very bizarre. There’s also a 90s MTV animation of it also, but it’s impossible to find nowadays.

Anime manga wise Katsuhiro Otomo and his masterpiece Akira it is the best Anime ever produce and the most detailed manga every drawn and I’ll fight anyone about this. Akira was one of the first anime I watched, and got me so passionate about it. If it wasn’t for him, I wouldn’t be so obsessed with drawing so much detail on stuff.

Satoshi Kon is my favourite anime director his focuses on psychological themes of identity and his artistic blend of reality and fantasy are defiantly a favourite theme of mine now thanks to him. Perfect blue was one of my early animes. Paprika is stunning and Paranoia Agent is a top 5 anime series for me. Shame we lost him at such an early age.

Full Metal Alchemist Brotherhood. This is my favourite thing in the world. Hiromu Arakawa came up with a fantastic universe and great range of characters that have influenced me to make sure every character I have has this amount of love and depth.

Film and TV-wise, I quite like David Fincher’s works. Fight Club, Seven and Mind Hunter being my favourite stuff with his name on. Also, Avatar, the Last Airbender and Legend of Korra.

Bojack Horseman, and how it is able to do silly but clever humour, dumb animal jokes then be the most realist, soul-crushing thing all at once is amazing. I would love to be able to write to their standards.

I could mention so much more stuff but this is already quite long, as I love gushing about stuff.  Can I add Digimon for monster design influence, or is that just going to make me look like a right loser? 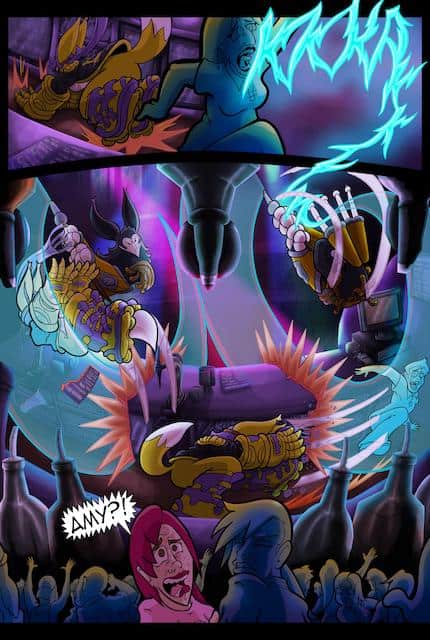 What are your aims with Go Go Comic Hull?

Well, it more just a passion project than anything else now. I love just drawing comics always have done. Whilst it would be nice to work on it full-time whilst getting paid that seems like a unrealistic goal nowadays than when I was first doing it. So, I guess the aim nowadays is just to keep perfecting the craft and keep me creatively active. If other people enjoy the art, world and characters I’ve created that an amazing bonus.

As Scott McCloud said on Writing comics: “My advice? Write what you want to read you’ll have more fun doing it and if all else fails, You’ll always have at least one loyal reader.”

How do you define success as an artist?

Well, I mean if I don’t really see myself as a successful artist considering I don’t get paid or have a fan base so I guess that. Sorry, that so negative and uninspiring. I mean that’s more a society peer pressure thing, as you see “we live in a society”.

Self-deprecating jokes and dated meme referencing aside, I guess if you’re passionate and enjoy doing it I feel people should class that as successful too. Art really is a personal creative thing for me, and huge part of my life, so to class it as successful or not a bit odd in some ways.

What would you say your biggest challenges are?

I normally work a full-time job, so trying to find time to do all the art projects I want to do whilst working and socialising is impossible. I guess juggling time is a big challenge and not being a quick drawer just adds to it. I’m also not very confident about my art so it hard for me to network that the big challenge I really need to overcome.

What advice would you give to other emerging comic artists?

Read loads of different comics but don’t just look at comics for inspiration. You need study your basic art skills as you got to be able to draw. Digital art skills are essential guys, li is the default now, so get a decent drawing tablet and learn Adobe ASAP.

Don’t be scared to experiment as well! Sometimes it’ll be a disaster but other times it’ll work but you’re not going to know, if you don’t mess around. Also, references – every great artist knows that you need to have a good reference. There’s only so much you can do from memory.

Art books on everything you love: These are not just great resources for references but looking into your idols work process is great for motivation and inspiration. Similarly, the internet and YouTube is your friend there are so many tutorials, resources and references for free, so the possibilities for your art are endless – you’ve just got to be creative and passionate about it. Finally, if you’re not enjoying it there’s no point!