Soundsphere joins metal quartet Cypher16 on the set of their video for single ‘Lonely Road’ inside London’s legendary Battersea Power Station. Battersea Power Station, icon of British industry and innovation, is no stranger to the music industry. Having graced the album cover of musical greats Pink Floyd – who tethered and freed a giant pig balloon to its chimneys for ‘Animals’ – served as endless inspiration for endless musicians of various genres, the station is today the location for metal upstarts Cypher16’s video shoot for current single ‘The Lonely Road’ from their EP ‘The Metaphorical Apocalypse’. 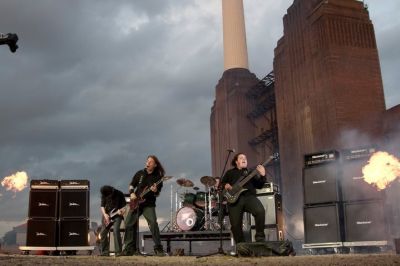 For singer and guitarist Jack Doolan, to be inside the derelict station’s centre is a dream come true at the end of a long year’s worth of planning. Living nearby to the station, and having filmed the band’s former video ‘Symphony To End It All (III)’ in Gloucester Cathedral, the urge to top their previous effort by including such a quintessentially British landmark was a gamble that’s paid off.

“A lot of people have said to us, ‘You do realise that Pink Floyd have done this before?’, as our album artwork by Dani Hofer, of Archetype Design also features the station,’ smiles Jack. “But how many other bands have actually done this [filmed inside], especially a metal band. If you put this against other great music videos, at least we’ve got an amazing location to begin with!”

Sitting inside a protective tent during a snatched 15 minutes between filming, the band is in high spirits. Smiling and joking, Jack, bassist Carl Dawkins, guitarist Stuart Deards and drummer Chris Woollams’ collective enthusiasm is infectious, which is just as well given that they’ve been on set since 6am, and will remain so until 11pm. Yet the mood remains buoyant, and Carl’s constant reminders in between takes for Chris to remember that they’re “doin’ it for the gels” makes for enjoyable camaraderic banter.

Formed in 2007 in London, Cypher16 are used to gruelling hours, and recall the uphill slog that young bands face whilst trying to crack the big time, especially in London, wearily. “It can be challenging playing in London, because you’re spoilt for choice musically,” says the garrulous Carl, as Jack sadly nods. “If you’re living in London you’re gonna have every touring artist from every genre, from Lady Gaga to Metallica, travelling through the city. There is no argument, they will play in London. So then why would you wanna go and see a smaller show? There’s no local scene in London. It’s essential to go to smaller shows and support young bands, because every credible act that’s made it big has had to go through the small touring circuit. All of them.”

Having gigged extensively around the UK’s small clubs and bars circuit, their hard work and considerable talent paid off with a tour of India supporting Lacuna Coil in 2010, visiting Goa, Bangalore and Mumbai. Prior to the rapturous reception from the Indian crowds, the boys had wowed America whilst still teenagers with Mudvayne, Hed P.E and Nonpoint at Florida’s Locofest in 2009. Drawing early inspiration from thrash titans Metallica and metal stalwarts Gojira and Machine Head, the band’s refusal to conform fully to any one genre has provided them with an innovative outlook on making, and touring their music. “Bands are often either screamo, or very melodic, and I’m not saying what we’re doing is unique, but at the same time it’s hard because we have pure melodic vocals and then really heavy music,” says the eager Carl. “With a lot of unsigned bands, it’s literally one or the other, which makes touring with others a bit of a challenge when you incorporate both. But we think that issue will get easier as time goes on.”

As filming resumes, and after the drama of Carl’s hard hat being unceremoniously half-inched, we decamp into the building’s famous control room as featured recently in historical romp ‘The King’s Speech’. Given the decidedly spooky backdrop of the ruined station, it’s surprising that more metal bands haven’t filmed here before. After thirty years as one of Britain’s primary electricity suppliers, the building was decommissioned and closed in 1983. In the years since the station has lain empty. Ruined art deco mosaics cover the scaffolded walls of Station A, and a health and safety expert cheerily informs us of the station’s resident rats, which are “as big as cats.”

After a perilous climb up six dangerous stairwells past a broken lift straight out of a horror film, we arrive in time to watch gorgeous model Louisa Marie film her scenes. Smouldering amongst the decay and masses of switches, dials and levers, it’s her job to smash a cable through a glass wall portal as part of the video’s plot. The entire crew is decked out with hard hats, hi-vis jackets and steel-capped boots because of the station’s sheer instability; bricks, tiles or metal fixtures are prone to fall or collapse at any time.

Several hours later, the crew assemble the equipment on the concrete wasteland outside to await nightfall. As the sun sets and in the ensuing darkness a series of pyrotechnics will be set off around the performing band, shooting flames and scattering sparks into the night air. Drenched in water to prevent flyaway hair, the band play doggedly along to the backing track for four hours, fighting the urge for cigarettes and cheese sandwiches. Their sheer energy and determination is remarkable.

“Pyrotechnic-wise, it would be taking the piss not to use them in a location like this,” muses Jack. “The worst possible outcome of this video is that we spent all this time refining the song, and for the video to not do it justice. That would be a disaster.” Carl agrees, “With a band like Rammstein, their live show is more theatrical than it is musical. I don’t see why you shouldn’t be able to balance the music with the theatrical side.”

As night falls, the future looks bright for Cypher16. After promotional duties for ‘The Metaphorical Apocalypse’ are fulfilled, they’ll decide whether to record a third EP, or to tackle the daunting task of a full-length album. As the band enjoyed being able to distil great effort into recording a select few songs on an EP, they chose not to record a full-length release initially due to, in the words of Carl; “to put it crudely, you don’t wanna blow your own load too early.” Wise words from a young band with the world at their feet.