Still reaping the benefits of going viral last year on TikTok with their song ‘Coming of Age,’ Nottingham-based four-piece Blondes sat down with us for a chat about all things nostalgia, life in lockdown, and doing what you love – and why popularity and streams don’t matter. 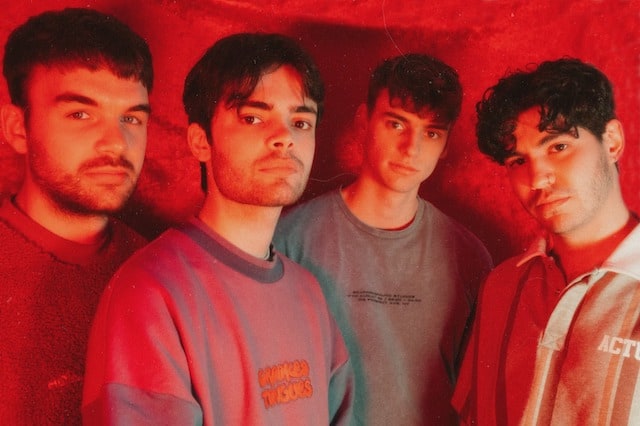 ‘Sometimes we get messages from people where they say, ‘I’ve always wanted to be a band and ‘Coming of Age’ has inspired me to do that,’ and that’s been really nice because people are taking the right kind of lesson,’ shares guitarist Alex Davison. ‘When we wrote ‘Coming of Age’ it was sort of semi-autobiographical and we just decided we’d give it a go without really worrying about what would happen, and just hoping it would pay off.’

Not originally from Nottingham, the band was formed after meeting at the city’s university – and the rest is history. For Blondes, it had been a case of playing, writing, and finding their feet as musicians up until they released their song ‘Coming of Age,’ which has since been at the forefront of a massive TikTok trend that first took off in October 2020.

Recalling the moment that they realised the success of their song, Alex said that: ‘It was 2 in the morning. I was on TikTok just scrolling through my For You page and it was the one by @bettercallhall, who’s a history teacher from the States and he made the original, or one of the original ‘If so-and-so were a coming of age movie’ parody, and I was like: ‘Oh, no way! that’s our song!’ That video was doing thousands of views a minute and it was bringing in an insane number of likes as well and just that moment was crazy. We had an official TikTok trend that they launched on our behalf, and the hashtag had over 2 billion views, which is insane!’

Bassist Tom Herbert remembers the conversations that were had surrounding the online surge: ‘I found it really funny, because me and Will [Potter, vocalist] made up some legal documents to send to people because people were saying we should get a lawyer – I can’t even afford an effing meal deal! We’re really lucky that we’ve found good people we trust and that all came from TikTok.’

The song is a clear example of the ‘euphoric indie pop’ that Blondes promise to provide, the opening guitar riff reminiscent of bands that were most prevalent in the 80s and 90s. The nostalgia of the track is part of what has led to its popularity – but is it something that the band actively focus on when producing new music?

‘I think that’s something we’ve leaned into a little bit more as we progressed as writers. We started out as a cover band, as most bands do, but you find your feet as you write more and you progress that way. We like the homage to the 80s and the 90s in both aesthetic and also in terms of our actual sound. In the intro [to ‘Coming of Age’], you can hear a lot of influence from bands like New Order and The Cure, and so the nostalgia is something we’ve leaned into more as we’ve really solidified our sound and pulled our influences in a bit more,’ explains Alex.

Tom adds, ‘we like films, but I’m not sure we’re inspired by them – more the aesthetics and the sounds. We weren’t around in those days, so we can’t really live it! It’s more to do with the vibe than the actual film.’

Viral popularity is something that many strive for; for some, it’s their main goal. But for Blondes that’s not necessarily the case; Alex explained what success means to them as a whole.

‘We talk about this all the time. When the song first took off, we were very hesitant to be like ‘this is it’ and then it wasn’t, because sometimes things go viral and you don’t get anything necessarily progressing from that, but for us it was the opening of the door into the music industry… As you become accustomed to that and you move the goalposts and you’re like, ‘now we want to go and play a show to X number of people or we want to play this festival, or we want to release an album and have it do this in the charts,’ or whatever, and you kind of set new goals all the time. I think that’s natural in any field but especially for us, you never want to get complacent with where you are.

For Blondes, they’ve found that social media has been a great way of not only sharing information, but for displaying their personalities online.

‘It’s definitely changed. Before, it was like, if we have a gig or a song, we do a post. On Instagram, the posts are usually quite formal and stuff – but we use the stories to show more personality. I raise sea monkeys on TikTok! TikTok is more for when we see something funny and it’s a bit more lighthearted, not taking ourselves too seriously kind of thing,’ said Tom

‘Our TikTok is pretty bad… Don’t waste your time!’ Alex added with a laugh.

With a handful of songs out on Spotify and some on YouTube, Blondes hope to expand their musical catalogue this year. Having already been able to record in Liverpool – when not producing demos in guitarist/drummer Dan Stroud’s bedroom – the band are eager to bring back old favourites alongside new tracks.

‘We had an EP that used to be up and is no longer there, basically. The intention is to do those songs better, I think they were good songs and a lot of our friends loved them and held them very dearly… There’s a lot of attachment there to them but the quality of recording isn’t really up to scratch, so we feel as though we can do them more justice by re-recording,’ Alex says.

‘It changes with every song, I think,’ vocalist Will explained, ‘all four of us are involved in the writing process now, it’s a lot more collaborative and the fact we live together as well makes it very easy to start on an initial idea. We can do that whenever we want or when we’ve got a spare moment.’

Playing live is also a huge part of any musician’s or band’s career. Having played locally around Nottingham and elsewhere, Blondes are absolutely missing the excitement and freedom of gigging:

‘It’s the best. It’s better than having a pint and a plate! It’s good for social interaction… I’d play to like, an old people’s home!’ Tom laughed.

Of course, the past year has been a rough time for the industry, and the band found themselves pushed back into quarantine after moving in when Covid restrictions had been more relaxed. Luckily, the group enjoy living together and credit their housemate Charlie – ‘we call her Charles, affectionately. We’re trying to get her to learn to play drums so she can come on tour with us’ – for enduring the noise that comes with it.

‘Obviously, being a band, you have to go on tour and you’re going to have to spend every waking minute with these people… We’ve definitely had to get used to living with each other, but it’s been very easy,’ Alex said.

‘We all had Coronavirus and it was really nice in a weird way because we all suffered together,’ Tom added. Alex jokingly also mentioned a ‘daily scream’ the band would partake in over that period to ease frustrations – not a terrible idea considering the kind of year that the world, and most certainly the music industry, has had!

‘The Arts industry generates so much for the economy but it’s not just that – everybody consumes art. It shouldn’t be undervalued in the way that it is. Everybody from like, film, TV, music, books – any form of art is so important in everyday life, and yet it isn’t really treated as such. There should be more of an emphasis of the Arts, and I think you’re right – the government hasn’t necessarily supported the industry as much as it could’ve. But, I think looking forward and thinking about it positively, when this is all over I think people are going to be really excited to get out and have a good time, and people are going to be wanting to go to shows and supporting artists and we’re just excited to see what happens there! And hopefully there’s a boom in creativity and stuff like that,’ Alex explained.

And aside from their daily Midsommar-style screaming sessions, the band asserted the importance of doing what you love, and not focusing too much on the popularity it may give you, or how famous you may become.

Dan Stroud put it simply: ‘If you wanna do music, just do music – why not?’ Will encouraged people to ‘play as much as you can.

Tom raised an important point that is all too relevant in today’s technological age – ‘I would say don’t care about numbers and stream figures – it doesn’t matter if you have, like, two listens on a song. If you enjoy what you’re doing and you believe in yourself, being famous doesn’t matter and having streams doesn’t matter.’

Alex built further on this, saying that: ‘If you make something you enjoy, then other people will gravitate towards that and if you do something that you’re passionate about, people will always enjoy it… If you enjoy it, don’t listen to what anyone else says and just do it. It’s a bit of a cliché, but it’s one for a reason!’

So, it’s safe to say that it’s been a hell of a few months for Blondes, with Tom noting that ‘we’re so lucky it’s happened in lockdown and we have social media!’ After a hard year, it’s wonderful to see musicians thriving and achieving their goals despite the turmoil and restrictions. And it’s not only music that Blondes are eager to share.

‘We have a website – blondesband.com!’ interjected Tom. Alex added: ‘It’s now where you can find links to all of our socials, we’ve got new merch lines out, including caps! The hats are really nice. We’ve got new music on the way soon, we’ve got a new single on the way that we’re really excited about…’

There’s no doubt Blondes will be providing the soundtrack to the rest of our year, and bringing us into a bright new age that will, hopefully, continue long into the future and beyond.