Blood Red Shoes is without doubt one of the UK’s brightest alt-rock hopes. With a sound that amalgamates the best parts of Nirvana and The Pixies over two albums, they have already attracted a worldwide fanbase through relentless touring and support from their dedicated fanbase. We chat to vocalist and drummer Steven Ansell about plans for a third record, touring and maintaining a DIY attitude despite their mainstream success. 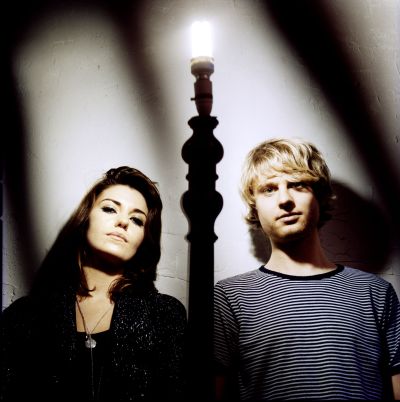 “Right now, Blood Red Shoes is like a shark”

S] What are your main aims and goals for this year?

SA] “To write and record our third album. We’ve been building up a lot of unfinished ideas for months and months now, so it’s time to get off the road for half-a-year and focus on writing properly.”

S] How will any new material that you are working on expand on ‘Fire Like This’ in terms of ideas and sonically?

SA] “I have no idea yet. So far we’ve written loads of different stuff, some of it is much more epic, some of it is really short and concise, some of it has longer instrumental passages. Most of it is the heaviest stuff we’ve ever written though. I think ‘Colours Fade’ is the biggest nod towards the direction we’re headed, but you never really know until you get into the studio and finish it all.”

SA] “Well we both fell in love with ‘Paris, Texas‘ [1984] whilst on tour this year and have been talking about music that evokes the feel of that film. It’s simultaneously really awkward but really beautiful, really uplifting and really bleak. I’d like to find a way to put that into our music.. I mean to be honest, we write by improvising and jamming so it’s really hard to have a conscious idea of where you want to go when you write like that. I think the influence comes out more in how we try to embellish the songs in the studio, or what songs we choose to put on the record to convey a certain thing. The actual writing process happens in a weird unconscious land where we don’t really know what’s inspiring us beyond our own internal chemistry.”

S] You have also appeared on the ‘Scott Pilgrim’ film Soundtrack, other than that, can you think of a film that would best fit the BRS sound and why?

SA] “If Wes Anderson is making a new film I’d love to have a song in that, as his work always blows me away. And if anyone makes a documentary about the student protests and rioting that happened late 2010, they should use ‘Light It Up’ on there because that’s almost exactly what the song is about.”

S] You recorded ‘Fire Like This’ in Liverpool – what significance does being up north and playing in cities like Leeds and Manchester have over your home and down south?

SA] “I don’t know if it has much significance to be honest. I don’t like to emphasise the north-south divide or anything like that. I think that’s just a joke these days – the new generation aren’t interested in that s**t that stuff is for the parents. I also hate it when I see bands answer questions like this, knowing that this magazine is based in the north of England – they always give the same bull**** response like, ‘Oh yeah, the north is the best!’. Like in Germany they’ll say, “Germany is the best’, and in Japan they’ll say, ‘Japan is the best’….bah. We like playing music to people who are appreciative, wherever they are. Leeds in particular has turned out a lot of good bands and in fact we had more of a following there compared to Brighton when we started. We spent three months living in Liverpool and it definitely feels like a home from home for us now, we really grew to love that city, and we never knew much about it previously. We’ve plenty of good times in the north, and the south, and Scotland, and Wales…”

S] You really seem to have gone from strength-to-strength over the last year – what were some of your biggest challenges of 2010, and what have you learned to take you forward into this year?

SA] “Yeah, we had a pretty good year this year. We’ve seen our live shows double in size in most places in the world and that’s been really exhilarating. For us the biggest challenge is just to stay on course and not get distracted. I mean in the UK, we got on Radio 1 a load, which is seen as a really big deal by the music industry bods, and once you land in that world it’s easy to lose your way – a lot of bands do it.

So, for us the challenge is to keep focussed on our path but also use that stuff to our advantage and get people to listen to our tunes. We also felt like we had a lot to prove because we’re quite an ‘outsider’ band, and when someone takes the chance and gives us that kind of exposure, I think a lot of people were coming to watch us thinking, “Okay, lemme see what you’ve got.” Converting people who wouldn’t normally listen to our kind of music is definitely a challenge.”

S] Is there a specific location or space that inspires your writing – do you draw from watching other people for example, or is it more based on personal experience.

SA] “Our writing process is really mysterious to me. It comes in fits and starts, we never really write much apart, we always write together…there’s never really a conscious plan or inspiration for what we write. We just let it flow, and then once we have the right spark of an idea we hammer it into shape and call it a song. We literally never know what we’re going to come out with.”

S] We’re interested to learn more about your videos – how much creative freedom do you get with those and can you talk us through the ideas behind ‘Heartsink’ and ‘Light It Up’ – there seems to be a focus on varying locations?

SA] “Well we realised, from our early videos that we needed to take the reigns a lot more because a lot of them just don’t represent our band properly. From ‘Colours Fade’ onwards our videos have had exponentially more input from me and Laura-Mary [Carter, guitar and vocals]. That’s not to say the directors weren’t relevant – they were crucial – but it was much more like a practical discussion about how to take our ideas and make them work.

‘Heartsink’ to me is an out-and-out pop song, I just thought the video would be cool if we could smash up as many things as possible. Just plain destruction. We were thinking of doing it at a house-party but we couldn’t find any rooms to wreck so we though, try it outside….then we gradually worked that into an interesting plot with a location, getting our fans in to break things.

The song is about disappointment, so having people smash up things that were significant to them, that they now want to ruin seemed appropriate. ‘Light It Up’ is lyrically about revolt, chaos, youth uprising and overturning the old order. We wanted to use the imagery of fire but also have something that felt like a really primal gathering that was celebratory and destructive at the same time. Much like a riot, or a gig, or probably what some people feel like at a football match.”

S] As a two-piece how do you enjoy performing live in contrast to being in the studio – you’ve played some big stages now, have you ever found it daunting?

SA] “On paper it’s daunting but I find once I’m up there everything makes sense. I never feel nervous I just usually get excited thinking how fucking loud we can be, and I like the challenge of seeing whether two little chancers like us can actually get 10,000 people to rock out. I love playing live and I love making records. But, I get withdrawal symptoms once we stop touring, and I don’t feel that when we finish an album.”

S] It’s documented in other interviews that you guys have fought a bit for various reasons – so, we ask, what keeps you inspired to keep going and moving forward even with the pressures on you to create, perform and coexist?

SA] “I have no idea. We just do what we do. It’s never been a concern that we don’t have any more energy or inspiration to keep moving. Someone once told me that ‘If a shark stops swimming, it dies’. Well right now, Blood Red Shoes is a fu***ng shark. Maybe one day it’ll all fall apart by right now we just live and breathe this band and its music, it’s who we are.”

S] What would you say that your bands ethos is – you value connection with your fans and you seem to want to recall all the best bits of the music that you loved growing up – is there more to it?

SA] “I guess so. That sounds pretty accurate to me. I think our standards change as we learn more and as the band moves forward. We’re quite purist in the sense that we want to be a real band and make sure we never do anything that’s not heartfelt or that’s watered down. I don’t want to be on a car advert or selling butter or doing Kit Kat-sponsored shows or writing some vacuous lyrically-ambiguous love song just to reach out to the mainstream. We’re ambitious and we want to be a big band, but we earned our stripes playing in DIY punk bands and we’ll be forever ingrained with the mentality that comes from that. It’s a strange and conflicting place to exist to be honest.

I really like the way Fugazi explained their ethos – they said that to be in a band was basically returning the favour. Because we all see these amazing bands who blow our minds, so starting our own band is just our attempt at returning the favour to them.”