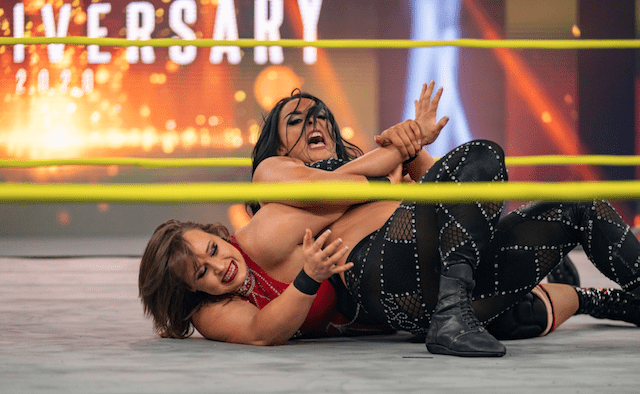 Hailing from Hackettstown, New Jersey, Deonna has slowly built a name for herself over the past few years. She began at the now-defunct D2W Pro Wrestling Academy in 2012, then, just over a year later in December 2013 she made her in-ring debut. She has had stints at every major wrestling championship under the sun and wiped away the competition at each one, whether that be WWE NXT, or Impact. Her signature moves, including Fujiwara Armbar hold is intense, and deadly.

Having won the Impact Knockout Championship, surely that is one of her many career highlights? “All the positive feedback that we’ve seen after Slammiversary around mine and Jordynne’s match, this means so much to me.” Indeed, Deonna feels as though coming into Impact, there was a target on her back, concerning her plans, and what she wanted to achieve.

With having no audience in the venue, a strange but ever more normal prospect for people whose job it is to sell out large arenas, how did Deonna realise the match was a success? “I think it was more afterwards, you know and just kinda once you get back and you kinda have a moment to like collect yourself and relax a little bit. Everyone from the minute I stepped through the curtain was just like ‘that was great, congratulations’ no hugs, and it was such a positive vibe.”

Deonna has wrestled for Impact before, (during its former incarnation as TNA Wrestling). In terms of the personal changes she has made is that regarding her character. “I was still very much in the same boat, but I was confident in my wrestling, and I was like okay, I can have a good match.” Characters and wrestling go hand in hand; you cannot get invested if there isn’t that connection with the character.

In terms of developing her character, “over the past six years, it has been a journey of how to develop a character around the wrestler that I am, and that’s very much where Virtuosa comes from, so Virtuosa is very much an individual of outstanding technical ability, and that very much reflects in my simplistic style of wrestling.”

In developing the character of Virtuosa, she found inspiration in the arts, with Virtuoso and Virtuosa being used to describe someone who can create art in the traditional forms of piano player of Violin. “In the last two or three years, it’s been forced upon me to explore it as a character, that’s why my music is in an orchestra (style), and so my ring jackets are elaborate and being able to tie in some more of those artistic elements to what makes a virtuosa,” she enthuses.

With Impact on TV every week, and Deonna about to undergo a rematch with Jordan, she seems in high spirits, even jokingly mentioning she would break Jordynne’s arm in the ring. For all this success that she has had, how does she define it? “I’ve always wanted to be a special wrestler, that’s the only thing I’ve wanted to do with my life.” Originally all she wanted was to become a wrestler, and she has achieved that and so much more. “From the first match I had in December of 2013 was like ‘I’ve succeeded’, I had one wrestling match, and for me, everything else has been icing on the cake.”

Having achieved a lot of the things in her career, she gives some advice for people wanting to get to their own goals. “I think the best thing to remember for anyone is no one has a path, and everyone’s journey is different.” It’s also about believing in yourself, “It’s just about finding that self-confidence, and building that up for yourself.”

We can’t wait until Deonna faces Jordynne Grace in the ‘Emergence’ special event, coming up in August on Impact.