Faderhead has been a standout act on the world’s industrial scene for a number of years now. Recently releasing his third full-length album FH3, the act’s mastermind Sami chats with us about how it all began and the thought process behind some of his most successful material. 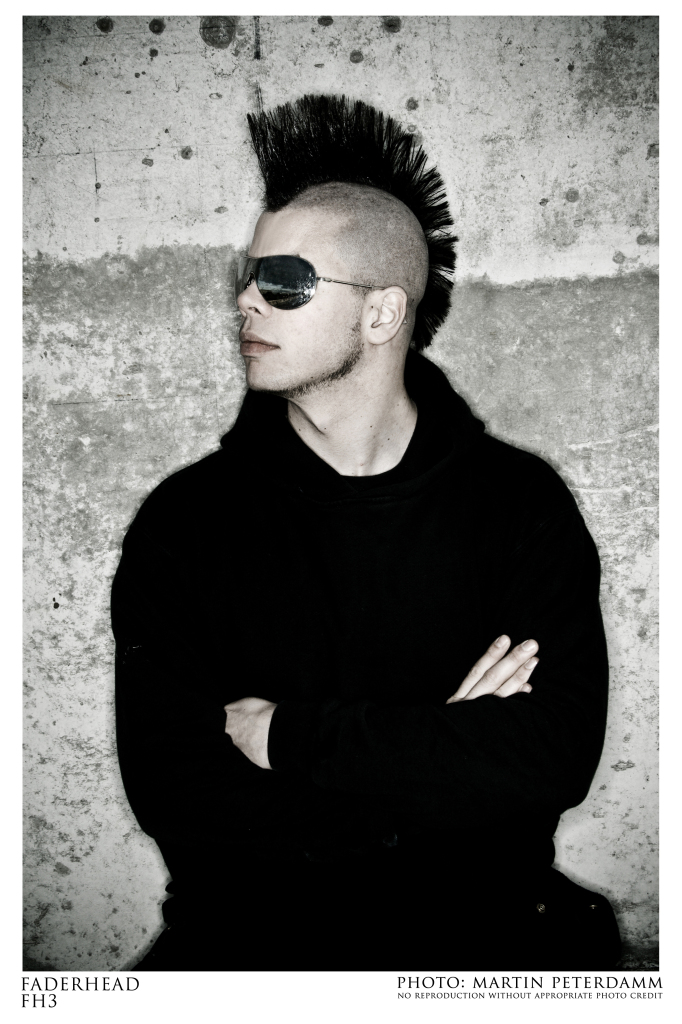 S] Can you describe the series of events that led up to the creation of Faderhead for you?

F] Well, I was hanging out at a friend’s party all the time and was unhappy with the music he was playing. So I was always saying to him ‘why don’t you play some GOOD music every once in a while?’ and at some point he got annoyed and just said to me, ‘you are a musician, MAKE some YOURSELF!’ So one Wednesday night I sat down to write Protagonist. My friend played it at his party on Saturday and on Sunday it was picked for the Advanced Electronics 3 compilation. That’s how it all started.

S] Though your music is electronically driven, you have always enjoyed incorporating acoustic instruments (live drums for example) into your performances, separating you from a large majority of acts on the industrial scene – how important for you is that live element to add to Faderhead experience?

F] Well, electronic music is electronic music. That means you can’t leave out the steady beats and the synths and precise basslines. I come from the metal world where actually playing live is essential and I wanted to incorporate this extra energy that you get from live drums and the live keyboard synthlines into the show. We have had to play a few shows without our drummer, because he was in hospital in the past and there is something missing every time.

S] You have a strong image and idea behind you, how have visual artists inspired you through the creation of your albums, if at all?

F] Not at all. Well, I used to be a digital artist. I was a founding member of the now-defunct elite artgroup Raster and so my upbringing has been very visual. There aren’t many visual artists that influenced me though. Maybe Luis Araujo, Dennis Sibeijn and Dave McKean. But they really have no influence directly on Faderhead and my music.

S] All of your records display your skills for amalgamating rock and electronic styles, but with FH3, is this record an attempt to escape the simple ‘electronic’ tag?

F] Not really. It’s just the logic evolution from FH2. The heaviness in the record comes from me being in a less happy mindset for most of 2007 and that is reflected in the music. I can only write about things that affect me, either because they have happened to me or to someone near me. So if my life is problematic, it will affect the music. There still is no live drumming and no guitar on FH3, so I wouldn’t call it very “rock”.

S] You are credited as being one of the nicest guys on the scene, how important (as a producer yourself) do you think it is for acts to help each other out in this niche Industrial genre?

F] [Laughs] Am I? Well, I believe that you should generally help out people. Especially in a genre where only three to four bands make any money, the rest needs to stick together. Luckily I found good friends in bands like Diorama, Modulate, Straftanz and others. We have played with all of them a number of times and it’s always fun. There is no need for competition because we are all there to do our thing and the only competition there is to play a better show than the other band, which is of course for the benefit of the audience. I’ve sent my complete kick drum collection to Adrian Hates (Diary Of Dreams) back in 2007 cause he was tired of his samples. I used to put custom sample sets onto my website, so others could use them and I am very active in some internet production forums because that’s how I have worked with my friends every since I started playing instruments. You learn from those who are better and you pass it on to those who want to know. That’s how it works. And it always comes back to you. If you think you can be better than anyone by not sharing your “secret”, then you are sadly mistaken. Especially in underground music styles like this one.

S] You became disillusioned by the scene earlier this year to the point where you didn’t think the new album would get a release, then you cited the reason as being because of the fans not actually paying for the music they ‘love’ – what was the turning point for you, when you decided it was time to get back up and release FH3?

F] FH3 was almost done, when I decided to leave Accession. So when L-Tracks approached me it was just a matter of fine tuning everything and getting the details done. The turning point was the knowledge that I wouldn’t lose a big chunk of my money, even if nobody bought the album.

S] You are a diverse musician so, when you create songs like ‘Dirty Grrls…’ and ‘TZDV’ do you just look at them as tracks for the dancefloor and how is the thought process different to when you create a song like ‘Exit Ghost’?

F] I create songs from different angles. I may have a song title, and a catchy punchline, a melody or a beat and I start with whatever inspires me that day. TZDV started as an hommage to Nitzer Ebb, simply cause I wanted to not make another ‘Dirtygrrrls/Dirtybois’, but something more old-school EBM sounding to surprise people. I had just worked with Fixmer and McCarthy and started listening to some Nitzer Ebb so I put in that type of bassline. I added the Laibach style vocals because my then-girlfriend was a huge Laibach fan and I thought it was catchy. ‘Exit Ghost’ on the other hand was a heartfelt ballad about my relationship breaking apart and the spirit of this love leaving us. I wrote it in less than 30 minutes while sitting at the piano because the lyrics just came out without having to think much. Those are always the best songs. It’s really very different from every track, but it’s about me and my life and not about some fake-ass wannabe tough industrial-cyber-killer-blood-sex-bullshit. That’s just sad. Especially if you get to know the people in real life and they are often the wimpiest people I have ever met.

S] Obviously you are associated with Modulate and Combichrist but as one of the major standout artists in the scene, are the any UK based acts you are particularly fond of right now?

F] Not really. I basically don’t like most music that exists in this world, regardless of the UK or any type of scene. Period. I like all kinds of stuff, but the only two scene CDs I own are‘Everybody Hates You’ by Combichrist and ‘A Violent Emotion’ by Aesthetic Perfection. The main act that I like from the UK is probably The Streets, but he doesn’t really have any scene credibility.

S] When will you return to the UK, how do you plan to expand your live show for 09 and what are your plans in general for next year?

S] Finally, can you describe your typical day to us? Working or not – From getting up in the morning onward?

F] I do not have typical days. I am a freelance photographer and music producer, so almost every day is different. I get up a totally different times and do totally different things. From photoshoot meetings with the marketing department of a company to going to the gym with my buddy Shawn, to sitting in the studio all day. It’s impossible to make up a typical day, really, and that’s how I like my life – it never gets boring.

For more information check out the Myspace and Website.