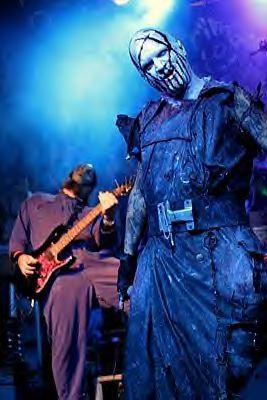 Cleveland based industrial metal outfit Mushroomhead gained notoriety after the creation of Slipknot, as fans and band members fought about who had the ‘masks and outfits’ idea first, but despite the battles and insult-trading the band are still going strong. MRH are planning on returning to the UK this summer after the release of their new album and managed to answer a few questions from Sphere about their recent activities in their own unique and succinct way. We had a brief chat with vocalist Jeffrey Nothing about Mushroomhead’s future.

Mushroomhead’s sound is rooted somewhat within the Industrial genre and it is old school sounds that keep them there -“Early 90’s Hardcore and Gabber. Thunderdome series, Knor Records and Nightmare in Rotterdam. That shit made me buy my first sampler rig.”And it is the underground mentality that keeps them grounded and maintains their close relationship with their fans says Nothing, “We maintain the underground mentality because we do everything ourselves; Recording, Engineering, Editing, Video Production, Photos, etc It keeps us grounded.”

It also helps that their identity is so unique, despite what Slipknot fans might say, people can identify with them and aspire to become them but it is always their music that dictates their attitude and look and it is no different with the new album –
“The music spells it out for us, tells us where to go. It’s a constant evolution, the look, the sound. It will no doubt be dark and twisted.”

Thier next album is forecast for a June release, but they are keeping the details close to their chest – “Every recording has been a totally different approach, yet it always comes out sounding like Mushroomhead. Re-occurring themes, sounds, samples, play on words. The ‘anything goes’ attitude doesn’t always work, but it keeps shit from getting boring. And when asked about guest appearances on the new record  – “Definitely, but we can’t tell you anything on that just yet. ‘We don’t talk about fight club'”

And what of New Year plans for the band? “Yeah, this year we are going to try and get our shit together” states the vocalist. And most importantly and finally, do they have a message for UK fans? Nothing says simply, “Is there anybody out there?”

For those who are feeling nostalgic, please check out the video for Solitaire Unraveling below..