After a long break, glittery glam-rockers Rachel Stamp are back for a one-off show in Islington to celebrate their forthcoming Greatest Hits album. SPHERE manage to catch up with front-man and founding member David Ryder-Prangley hours before the much-anticipated show began. There’s a lot going on – a film crew is sorting their gear out, the merchandise stand is being set up and support act My Passion are doing their sound check. After a few minutes, we find a quiet spot backstage by the buffet. David starts to make drinks and we discuss what’s happened in the last five years, lobotomy and the real meaning of rock n’ roll… 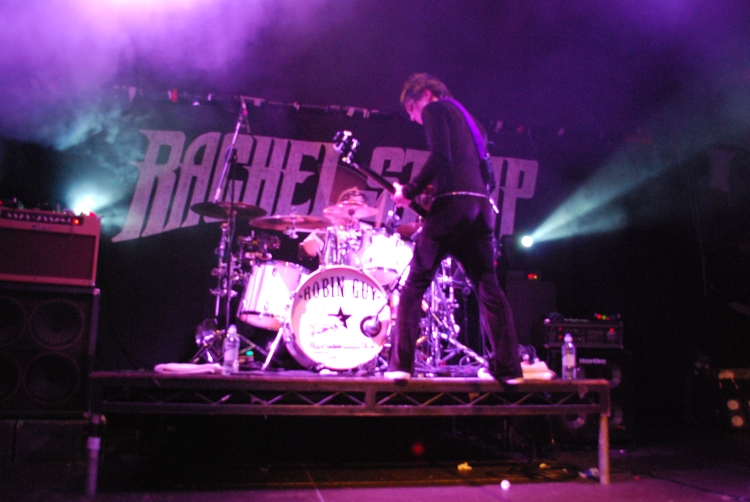 [DRP] Yeah it was either 1994 or 1995, I can’t remember, it was when I first met Will (lead guitar) and that’s when the band really first started. I’d had the idea of Rachel Stamp before that when I lived in Wales, I’d made some demo tapes and then when I moved to London and met Will, we found both really liked this band called Redd Kross from LA and we got on really well so we decided to form a band together. Weirdly enough when I came to London from Wales I was really self-conscious about what was cool and what wasn’t cool and Will was just like ‘yeah fuck all that – we’ll just do what we do and we’ll be cool’ so it was a good balance because, especially when I first moved here I’d try a little too hard to impress people and he was just like ‘what are you doing that for?’ which was just what I needed so it was a perfect combination really.

[S] So what was the inspiration for the name? Is there a ‘real’ Rachel Stamp?

[DRP] Well I can’t tell you cause then I’d have to kill you.

[DRP] Well I could tell you, but then you’d die… it’s just a choice you’ll have to make.

[S] Okay, I’ll keep my life then! Obviously in the past five years since you last toured, the music scene has changed a lot and even more so since you first started, how do you think Rachel Stamp fits in with the music scene today?

[S] I remember in an interview years ago, you described yourselves as the ‘Miss Haversham of rock’?

[DRP] Yeah, yeah. That was me showing my lack of knowledge of literature back then because Miss Haversham willfully locked herself away whereas I was referring to the fact that other people were trying to lock us away.

[S] So you never really felt like you fit in, you’ve just done your own thing?

[DRP] Well yeah, it was really weird because when I first came to London, I rather naively thought ‘yeah, great, we’ll just put our album out and everything will be great’ and everyone would think it was brilliant but we found people were turning round and saying ‘What are you doing? We don’t know what you are!’ At the time, Britpop was big with people like Blur and Beck and I’d say to people, ‘well it’s like Beck, but it’s a band’ Beck just does whatever he wants and that’s what we do. At the same time you had Blur and I’m not a massive fan of their music but I’ve got great admiration for them just because they really do take twists and turns, whereas a lot of bands claim that they change and don’t. Blur really do that. So really, the attitude wasn’t that different to Blur or Pulp who were popular at the time, but because we had loud guitars people just didn’t get it. 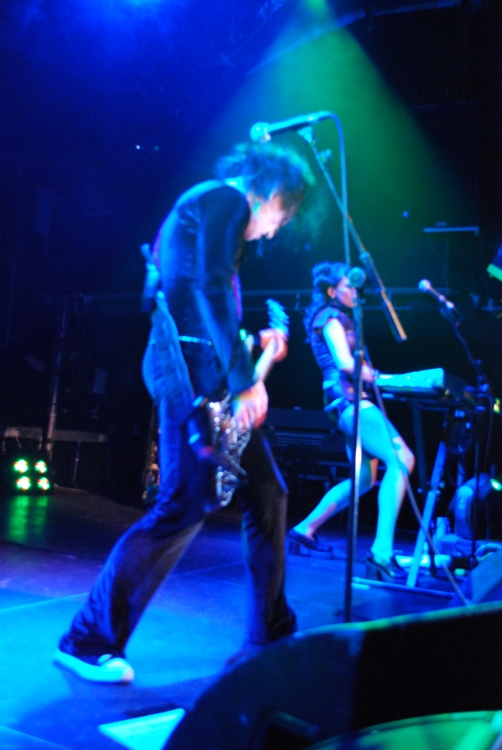 [S] You did have a lot of success though. Famously selling out the London Astoria while being unsigned but, again, that was a while ago. Why do you think now is the time to show your face on the music scene again?

[DRP] Well, I think rock n’ roll has become very corporate and very conservative and I find it bizarre when you have bands like Avenged Sevenfold or whatever who are fucking right-wingers. Rock n’ roll was invented by gay black people so you can’t come out loving George Bush – to me it’s just wrong. People have just forgotten what rock n’ roll is about and I think, if nothing else, Rachel Stamp is completely about rock n’ roll. So, we just want to come out and put some passion into the world of rock n’ roll. It’s almost as if we’re on our little island and we’re shooting a flare into the sky.

[S] So what is the future then?

[DRP] We literally have no plans beyond going on stage in about four hours – wait two hours – I need to start getting ready! So yeah that’s about it really.

[S] I did hear that you were going to do a follow-up to your 2002 album ‘Oceans Of Venus’ and it was to be called ‘Ravenous’ – what happened to that?

[DRP] Yeah that’s right, we recorded a load of demos for it but we never actually recorded the album. We were with a record company and had a producer lined up who really wanted us to make the album and we were sending loads across to the States, but the record company was fucking useless so it all kind of crumbled.

I think the trouble was, people would not realize that the band’s job is to play the music, to create music and the management and record company’s job is to sell the music, and so many times they would come to us and say ‘what do you think we should do?’ and I’d be like ‘Am I in the marketing department now?’ so that’s the thing, I just hate the music business – it’s a nightmare – so I just wanted to get out of it really, I think we all do to a certain extent but also we want to show them what it’s all about. When we announced this show, loads of people were saying to me ‘oh you must be really excited your old band getting back together’ and I hadn’t even thought about it because I’m not really doing it for me.

[S] Well your reputation from shows before is that you’re really energetic, a bit crazy, get injured, cut your pigtails off on stage, can we expect that kind of show from you tonight?

[DRP] Well you don’t really plan those things, it just happens by chance so I don’t know, we’ll see what happens… I might give myself a lobotomy.

[DRP] Yeah and that’ll be the end of the set… and people can put me on a plinth… in Trafalgar Square!

[S] On top of Nelson’s Column?

[S] So, ‘Rachel Stamp: The Movie’ what would it be like? Would the lobotomy be involved?

[DRP] Well it would start with that – I’d be up there, and a pigeon would land on my shoulder and be looking at me really curiously and then there’d be a flashback because the pigeon at some point would have been to one of our gigs and that’s what it’d be!

[S] Rachel Stamp through the eyes of a pigeon – awesome! So out of all the bands you’ve supported and who have supported you, who have been the most fun to play with?

[DRP] Well when we played with Korn, that was hilarious because we got bottled the whole time, but I got on really well with Jonathon Davis who really liked our band and he was just really cool, really friendly. I’ve met him a few times over the years. Also, we played with Cheap Trick who are our idols – that was amazing.

I think tonight should be a lot of fun, we’ve got My Passion who are amazing, I produced a lot of their singles, I’ve known them for years and Billy Boy On Poison, they’re from LA and I’m really glad I got them on the show because I think they’re brilliant. My friend sent me a CD of theirs and it was just one of the best things I’ve heard in years and I went to see them the other night and they were really, really brilliant. They’re the kind of band that people will be divided over. Some people will go ‘ooh what is it? We’re not sure what it is!’ because it is something new, but very rock n’ roll. 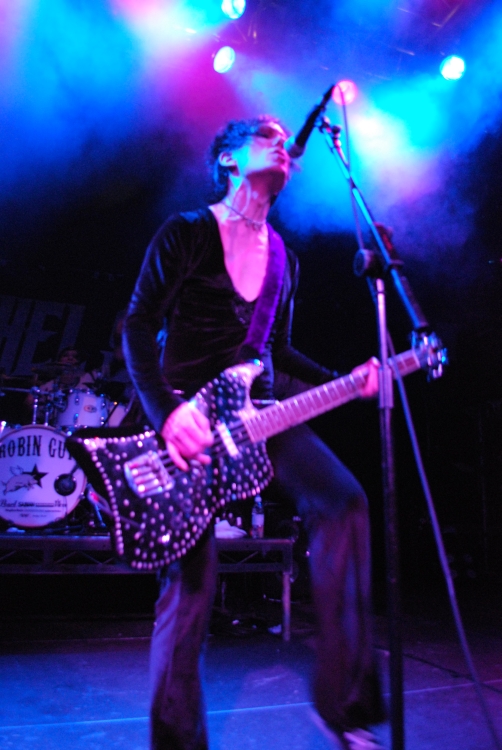 [S] Did you choose new bands on purpose then?

[DRP] Yeah, we did – it’s the bill that we wanted. We didn’t want it to be a nostalgia show – we wanted it to be worth something.

[S] Here at SPHERE, we generally concentrate on the North of England, I know you’ve played a lot of venues in the North. So, in your opinion, which is the best city in the North to play in?

[S] You’ve got your Greatest Hits album ‘Now I’m Nailed to The Bedroom Wall I’ve Only Got Myself To Blame’ coming out on April 27th, how hard was it to choose the track list?

[DRP] It was really hard, because certain things we had to leave out. Originally we were going to do a DVD with it as well, so we’d have some stuff on the CD and some stuff on the DVD but we decided to put the DVD off because we had so much stuff and it would have been a big production to do, so we decided to not do it this time and do it later as a film-length production. That’s the plan… but don’t hold your breath!

[S] Hopefully it won’t be another five years though!

[DRP] I just think people need to remember what rock n’ roll is about. It’s the music of rebellion and free-thinking. People shouldn’t be afraid to be individual. When rock n’ roll first started – even in the 80s – every band was doing something different, they wouldn’t look at other bands and copy them, they’d look at other bands and think ‘what can we do that they won’t think of?’ but people don’t do that anymore, it’s all very much uniformed and I hate that. World governments are full of stupid people who are just in denial of the truth and have a very conservative front when they can see what’s going on. I think rock n’ roll is almost like a streaker – take your clothes off and run down the road, because then there’s no hiding anything and that to me is what it’s all about. So yeah, we’re going to streak for rock n’ roll.

[DRP] Who knows? Wait and see!

Rachel Stamp’s Greatest Hits album ‘Now I’m Nailed To Your Bedroom Wall I’ve Only Got Myself To Blame’ is released April 27. For more information visit the band’s Myspace.

2009alternativeGothNow I'm Nailed To Your Bedroom Wall and I've Only Got Myself To Blame.Rachel Stampsphere webzine