DV8Fest is a brand new event is to be held for the first time ever in York this July from the 15th to the 18th and it will showcase some of the greatest talents on the UK dark alternative scene over three nights in three different venues across the city. We recently had a chance to sit down with the event’s passionate and ever-cheerful promoter Christopher Sherrington, to talk about his experiences running events within the gothic community for the last ten years including DV80s, …Deviation and now, the DV8 Festival. 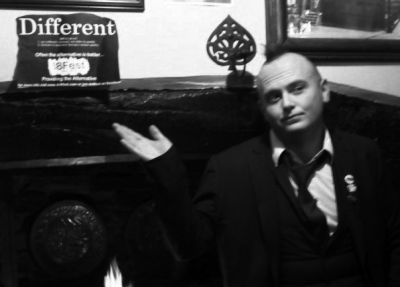 “I love goth music, it brings people together”

We began by talking about how the idea for the festival first formed and the significance of it in terms of Christopher‘s career as a promoter. “It came about because this year is the tenth anniversary of …Deviation which was the first goth-orientated night I ran in York, and it’s really grown from there.

“I am proud of York – people can come and have a good time and it really is a great place to socialise, so I wanted to start something by getting some bands together. It’s developed since October of last year when I actually decided I was going to go ahead with it.”

The formation of the night began when Christopher made a phone call to a friend about putting together an anniversary gig for …Deviation. “I said that I wanted to do something big. It all came together when I was running an event at The Shambles for Whitby Goth Weekend last year and I put down a flyer that said ‘DV8Fest’ – from there I couldn’t take it back.”

Christopher has spent years supporting dark culture have given him a well-rounded perspective on the “scene” and the people that make it special. “I think that “goth” as a genre is more broad than people give it credit for. There are lots of little sub-genres including industrial and post-punk and I wanted to have a festival where people could come and meet with friends during the day and then on the evening they could go and check out the bands they love.”

Over the three nights each of the stages will cater for a variety of different tastes – the first, located at The Duchess will showcase some of the world’s premier goth bands, the second (at Fibbers) will be centred around the industrial and EBM genres and the third stage will be at Stereo, with the focus being on rockabilly, punk and deathrock sounds – in-between the music there will also be an exciting array of burlesque performers.

“When I started speaking to the venues, there was some uncertainty as to whether we could pull of something of this scale, but since then we’ve seen the support grow and Tim (at The Duchess) along with Joff (at Fibbers and Stereo) are fully behind DV8.

“The most important thing for me throughout the whole process has been making contacts with people and getting to know other promoters while looking at bands who are doing something new – this festival is about blending the old-school with the new.”

Christopher explained how the whole process has been and eagerly relays some of the great talent already involved. “We have now confirmed The Eden House which is good because they are making some great music. We’ve also got The Screaming Banshee Aircrew along with Rhombus, Zeigeist Zero, Luxury Stranger, Pretentious, Moi?, Grooving In Green and Glass – it’s going to be a really great mix of music.”

The festival has also teamed up with local attractions including the York Dungeon to offer discount entry during the day. There will also be trade stalls operating in Barley Hall and the Park Inn Hotel, another venue within the city centre.

Christopher hopes that the alternative music scene in York will flourish and develop as a result of people enjoying the festival. He said, “I love this city. It’s uniquely placed. My aim is to develop more alternative gigs because there are some great bands that are doing really well here and I want them to be seen. Really, I just want people to come and enjoy this place as much as I do.”

The promoter also discussed the wealth of competition in the north at the minute. He reflected positively on the goth community and how supportive everyone can be. “There’s this big thing about competition with nights and events, but in the goth scene it’s friendly competition.

“I don’t want other nights to suffer. I’m hoping that by doing this and having this ‘healthy competition’ we’ll get more people involved with what we are doing and also there will be more punters going to nights like Darklands and Friday Flock. I think it’ll really improve the experience for fans of this kind of music.”

On a more personal note, the promoter briefly talked about his history within the goth scene and its significance for him. “The first time I ever had anything to do with goth was when I was around 15-years-old and I was given a tape with 13 Candles on one side and The Mission on the other.

“I have changed so much and I love different genres like EBM and deathrock – that’s the one thing I really do love about goth music, it covers such a broad spectrum and it brings people together.”

While Christopher has been a central figure within the dark music scene in York for many years now, he has also developed another night, DV80s in York and now Leeds. When referring to the event, he championed the diversity that is inherent within the region’s goth scene and the fact that many people who attend the DV80s night readily enjoy Madonna, Bowie and Adam Ant as much as they do The Sisters Of Mercy or The Mission.  – this celebrates music from that era and its following has grown steadily in

“I’ve always wanted to break down barriers. York is such an open place and goths do like many different types of music but, at times they still worry about what people will say when they go out on a night. It works the other way around as well with people who are not part of the scene. In that respect, DV80s has been really positive because we get such a great crossover of people.”

In terms of offering advice to other people who are involved in the scene and may want to start their own goth-centric event, Christopher said that social interaction is the key to success. “For anyone thinking about promoting a night – you need to get to know your market and the people. You cannot afford to have an ‘us versus them’ mentality.

“For bands, I would say it’s equally important to get the word out, there are many DJs and underground magazines that are begging for new bands and artists to support – you never know when you are going to meet someone who can really make a difference.”

While the future of DV8Fest is not certain, Christopher says that he’d love to do a yearly event. “I’d love to make DV8Fest an annual thing. Though, I don’t think it needs to stay in one city, but it will be in York for this year and hopefully the next.”

I want people to see a new city, check out the venues and then move on to another place for the following year. Throughout the UK there are great cities that people need to see with some good venues. I like the idea of a travelling festival.”

Due to the response from bands who want to take part at DV8, the promoter also plans to put on smaller gigs and clubnights throughout the year over in Leeds and Manchester.

“These other events will be done under my brand of Deviational Media. We’re going to be having some Deviation nights that’ll centre around goth, metal and industrial and alongside that, we’ll be continuing DV80s as well.”

As our conversation came to a close, Christopher talked about the process of putting the festival together and how he has developed a solid team who have supported him.

“While I’ve made the major decisions regarding this festival, there has been a group of people including the venue promoters, our designer and some of my really good friends who have been helping out – I really cannot thank them enough.”

To conclude the promoter described how important the scene is to him and reflects on what has kept him going. “If you enjoy something and you love doing it – then you will do it. For me, it’s about reminding myself to stop. I wouldn’t change that for the world – I am very glad I put that flyer down on the table.”