Electric Six are known as rock’s favourite party band. However, with their latest album, ‘KILL’, the Detroit six-piece are giving us some food for thought. We spoke to guitarist The Colonel recently about the upcoming UK tour and how the new genre-bending record represents a progression for the group… 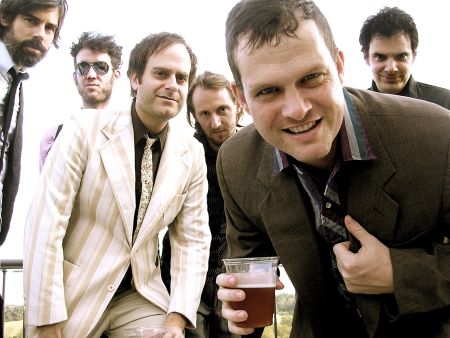 “The new album is like a Yorkie candy bar”

S] Can you tell us about the sound of your new record – how does it  represent the progression of the band away from the past E6 releases?

TC] The sound is slightly more aggressive. It’s a man’s album, or at  least it’s a Yorkie candy bar. A lot of it was recorded and mixed  pretty quickly, so there’s some rough edges in there. It’s really just more of everything – more guitar, more keyboards, more drums, more  vocals. More reverb. It’s actually insane, the ways we’ve combined  these household instruments. But I don’t think we’re moving away from  anything… or if we are, it actually brings us closer to where we’ve already been. You know, like a möbius strip.

S] How about sound-wise, are you still going to amalgamate genres, or are you stripping things back a little?

TC] It’s totally amalgamated, but I’m just guessing what that word means. We have no preconceived ideas about what it’s supposed to sound like.  If an African udu drum sounds good, we rock it. Or a repenique? A darabuka or a djembe? A bass guitar? Fuck it… throw it in there. We’re not going to hurt anyone by mixing metal and afro-cuban rhythms. Maybe we will, but we won’t know until we try it.

S] If you could sit down and listen to the new record with anyone,  dead or alive who would it be and why?

TC] That’s a really tough question. Thank you for asking it, but I must respectfully decline to answer it… because the answer is far too painful. Actually, no… how about Sean Penn. I think he’d be into it.

S] You have a very strong visual identity so what ideas do you have to  expand on Electric Six both on stage and screen, in the wake of this new record?

TC] Do we have a strong visual identity? That’s interesting, because I feel like we get onstage wearing the same clothes year after year. Maybe we have a strong visual identity because we refuse to update our visual identity. Each year it gets stronger, like an oak tree rooted firmly in the soil. I mean, we’re not a fashion band. We just somehow got mislabeled as such by people who obviously never saw us.  Which is fine. There are no smoke machines, no mirrors, no lasers. But who knows… maybe we’re the coolest-looking band you ever saw. Maybe we have a natural, youthful radiance. So, expanding our visual identity. I guess I was planning on buying a new pair of pants for this album. And there’s a hot, new video for ‘Body Shot‘ out now, which features a ton of naked women. That’s the truth. It’s made by a guy who’s done several Kanye West videos, and is shooting a P Diddy soon.

S] Can you tell us why you chose to have the title ‘Kill’ in bold –  what kind of statement are you trying to make here?

TC] Look, we don’t want anyone to actually go out and ‘KILL‘. That would be crazy! I think ‘KILL‘ is just a statement of frustration and general dissatisfaction but you can apply it to whatever you want. Got a paper cut? ‘KILL‘ Late for an appointment? ‘KILL‘ Pancreatic cancer? ‘KILL‘ That kind of thing. Being on the road for six years can play havoc with men’s minds.

S] In terms of your production skills, how have you developed and how is your approach different on this record?

TC] We’re really just making a pizza. We talk a little about what kind of pizza we want to make, and then Dick gives me the dough and we all put some stuff on it and then it goes in the oven. The newer technology takes a lot of hassle out of things and lets you focus on making interesting pizza, I guess. It’s the same as anything else, you get better at something after you’ve done it a few times. The only real “approach” was to keep it weird and, or heavy whenever possible. So we got a weird, heavy pizza… so delicious.

S] Dick (Valentine, vocals) has said previously that you’re treated  like a novelty act in the UK – do you still enjoy the experience of  coming over or do you have preconceptions about your audience?

TC] I think we’re only treated as a “novelty act” by the NME and its ilk, and their attitude was foretold in the prophecy 4000 years ago. The fans are absolutely great. Some of our most apeshit, enthusiastic  audiences are definitely in the UK. The kids don’t care about the ancient, clandestine NME prophecy. They just want to have a good time. So yeah, we enjoy the hell out of coming over to the UK. It’s like Christmas every day there, except when you open the gift, it’s an apes*it audience and a Pizza Express. I’m talking a lot about pizza, I know.

S] What’s your opinion on the state of the industry at the minute, and how do you see Electric Six fitting in, or not at the case maybe?

TC] The industry…the syphilitic juggernaut…it is what it is. I can’t say anything that hasn’t already been said a thousand times. Personally, I wouldn’t want to be a band trying to break today. It seems like it’s harder than it ever was, just because there’s so many  more bands. Every person I know is in ten bands. The guy at Pizza Express is in ten bands, and they’re all probably pretty cool. There’s  so many outlets, and so many bands, and so many different levels of  success you can achieve. I think we found a level of success that  works for us, that we are comfortable in and blah blah blah. And of  course, we’ve got a couple of good, small labels behind us…but none  of this would be happening without the initial push we got. I don’t  know how you’d get a push like that these days unless you genuinely  f**king suck a dog d**k.

For more information visit the official MySpace. Read our review of the new album here.