Recently, we had the opportunity to catch up with Fair To Midland vocalist Darroh Sudderth to talk about what’s been going on with the band as they work to record their next record. We chat about the vocalist’s inspirations and some of the most exciting new plans. 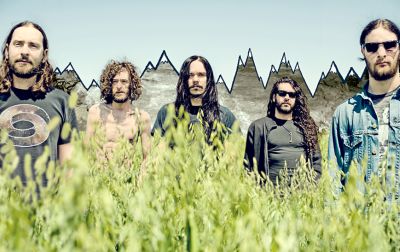 S] Since the terrible bus crash you had in January which destroyed your equipment, have you all managed to recover?

D] Hell…in retrospect, I think we found where we were supposed to be during that crash – now we’re just trying to figure out how to get back there without killing ourselves.

S] Which track that you have worked on so far are you most looking forward to playing live and why?

D] Well, if it comes out like I think it will…probably ‘Amarillo Sleeps On My Pillow‘…imagine The Union Station and Ralph Stanley‘s child knocked-up Mastodon – that’s a tough call though. I think instead of falling into what seems to be, the natural evolution of toning down for lack of a better term…our balls may have dropped, aside from one or two exceptions, this album will be much more apathetically hostile than anything else.

S] What would you say is the biggest achievement for Fair To Midland so far?

D] Just having people interested in anything we do or release I suppose. I would say having this big of a gap between albums and still being asked to do interviews is also great. And, people not losing interest – hell, attention spans aren’t what they used to be. I sound like a fu**in’ grandpa – no…not a grandpa…a peepaw…Texans have peepaws…and I do believe the new album will be quite the achievement.

S] It was evident that Serj Tankian and Serjical Strike Records were involved with the ‘Fables From a Mayfly: What I Tell You Three Times is True’. Has Serj been active with the new material?

D] We are doing it all ourselves – after all, we have the best grasp on what it is we’re trying to do with this next album.

S] Are you planning to tour the UK at anytime in the future? If so who would you most like to tour with?

D] Absolutely, and if we have it our way…extensively. It obviously won’t be until after the release of the album, but like the ‘Terminator’ before us, we will be back.

S] What are your major plans for the near future?

D] Releasing a stellar album of course and touring an ungodly amount, we’re also going to be filming the recording process and doing a few tours prior to the album’s release to be made available at an as yet undetermined time.

S] Have you thought or decided on any new album titles?

D] Why yes, we’ve got it down to a few, but then we can’t have any spoilers now can we?

S] Since you already have a phenomenal vocal range and techniques, have you been working on any more techniques at all?

D] Thank you. I think a large majority of the vocal melodies I write can be a bit over ambitious, but yes I’m always working on new ways to use my voice and I think they’ll be pretty apparent on the album.

S] Are you planning to get any guests to perform on any of the new material?

D] I have thought about a few. There is already one song with a children’s choir. I’m planning on asking a good friend of mine to play some lap steel [guitar] on a few songs and I’m also going to be asking another good friend to play some fiddle on another track. I could definitely see involving a few other friends, but it really comes down to what the song calls for.

S] Which bands would you say were the biggest inspiration for you?

D] I honestly wouldn’t know where to begin to answer that question. For me, everyone from Chuck Berry to The Beach Boys, The Kinks to Corrosion Of Conformity, then Sunny Day Real Estate to The Who via Hank Williams and Failure – I really can’t limit it to a few. It all inspires me. Even hearing complete sh** inspires me. That’s like me trying to answer, ‘what makes your water wet’?

S] Are you planning to get James Riches or anybody else to do album art for you again?

D] As much as I love James and his work, we’ll probably be going with a different artist and possibly doing some ourselves given what we try doesn’t look like ass, which may very well wind up being the case. It’s really going to take us hearing and digesting the finished product to know what kind of artwork the material calls for.

S] Whilst on the road, is there anything that you can’t leave without from home?

S] If you could choose to have any fictional character in the band who would it be and why?

D] Oh hands down it’s got to be Grendel – easily one the of saddest, most brutal, alienated and desperate characters in literary fiction, to my knowledge. He’s far from a cartoon, but, yeah, I would replace myself with Grendel and then watch him eat people while he cried.