Front Line Assembly is one of the defining acts in the history of industrial music. Their sound varies between pure and ambient electronica and harsh techno metal that appeals to fans across the vast genre spectrum. Somehow managing to keep ever-relevant and musically diverse throughout their 20-year history, FLA is about to release a new record, titled ‘Improvised Electronic Device‘, we speak to Bill Leeb about the themes and ideas behind the record. 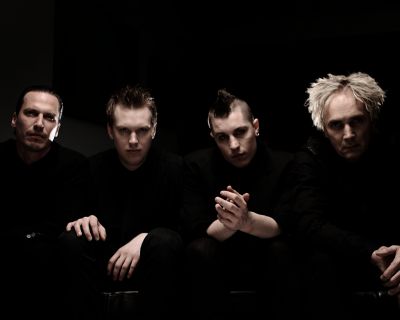 “The UK always has the most unique type of energy”

S] What are you most looking forward to about the UK shows next month?

BL] London [and the UK] always has the most unique type of energy, when the punter gets drunk, crazy things happen.

S] Are you planning to see any sights while you are over here?

BL] Having been to Europe back and forth for the last 20 years, the only thing we ever look forward to seeing is some hot European ass.

S] What are the over-riding themes on the new album?

BL] Basically, we’ve created an unsustainable civilization for our planet. we are damned with technology, and we are damned without it. The key phrase is less means more, but with the inevitable population explosion, in the entire world there will never be enough from here on in, so its every man for himself.

S] What was the biggest challenge that you faced as a group when making the album?

BL] Apart from making sure we didn’t run out of beer and ca**abis, the biggest challenge was making sure we were all artistically happy with what was going on. Also, knowing that probably isn’t ever totally completely possible but forging ahead none the less.

S] How will your ideas about ‘finding new ways to make sound’ on this record continue into future material?

BL] As we speak, new sounds are constantly evolving in the world with every new type of machinery and technology. It’s so easy to create new ambiences in this ever expanding universe, the constant changes create new sounds in our environment. As long as we evolve with technology, sounds will evolve whether we want them to or not.

S] Is there a track on the new record that you believe defines the state of FLA right now?

BL] Both ‘Angriff‘ and ‘IED‘ define the state of FLA right now, both musically and lyrically.

S] How was working with Al Jourgensen for ‘Stupidity’ – was there a standout moment?

BL] The stand out moment was just the fact that we were able to collaborate together musically. We felt equally inspired by the track and so it definitely created its own momentum and that was the source of inspiration.

S] What keeps the band passionate about industrial and electronic music now in 2010?

BL] The fact that things are still changing all the time in one for or another and knowing that the perfect electronic album hasn’t been written yet.

S] How important is touring for the band’s dynamic?

BL] At this part, I feel its always important for people to come out and see us. I think we’ve been around long enough for fans to understand what we represent and if you are at all interested in this scene then you’ll know what we stand for.

S] Your random question – if you could remove the soundtrack for any movie and replace it with the material from ‘Improvised Electronic Device’ which film would you choose and why?

BL] We would have to say that ‘Terminator Salvation‘ has the feel that would suit the music and lyrical content of ‘Improvised Electronic Device‘. We feel that that movie and our album somehow predict how our world will end up one day.

For more information visit the official MySpace. Read our review of the album here.