From way past Uranus, those scumdogs of the universe, Gwar, have spent the last 25 years attempting to bring about the apocalypse and the ultimate destruction of mankind. They have failed. Instead they have provided us with live shows that provide a blood-drenching backdrop to their songs, the lyrical content of which are rarely discussed in polite company, but include titles such as ‘Bring Back The Bomb’ and ‘Penis I See’. That their scathing social and political satire is often overlooked in favour of their chaotic, demented and glorious live shows is no-one’s fault but their own, but then who wouldn’t rather witness the ritual disemboweling of Paris Hilton than discuss the horror of everyday living that Gwar unflinchingly expose to our desensitized psyches?

Behind the costumes and the outrage are a dedicated team of highly skilled artists and musicians whose efforts into furthering the Gwar universe have extended from comics to movies and even a Games Workshop-style miniatures game. On the eve of the release of Gwar’s new album, ‘Lust In Space’ (on Metal Blade), SPHERE tracked down vocalist Oderus Urungus (or Dave Brockie as his mum calls him) to their lair, the Slave Pit, deep in the Antarctic wasteland for a quick chat, a cup of tea and not forgetting some cake and sodomy. 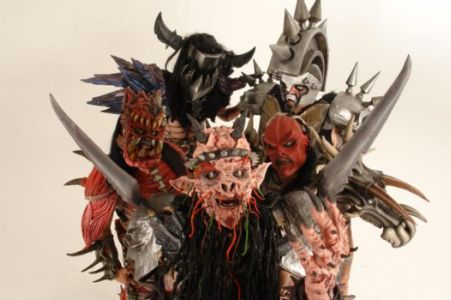 “Whatever we do is perfect, faultless, and without question, no matter how filthy”

S] Happy 25th birthday! How’s the current mood down at the slave pit?

Oderus] I don’t have a clue! The slave pit is for slaves, and I am a slave master! I am sure it is full of slaves, slaving endlessly for the gain of their masters – most notably me, Oderus Urungus. This doesn’t concern me – I am in Las Vegas, surrounded by coke and whores!

S] What can you tell us about new album ‘Lust In Space’? We’re guessing it’s about fucking. in space….?

Oderus] ‘Lust In Space‘ chronicles Gwar‘s latest series of idiotic adventures, this time involving us finally escaping this miserable planet once and for all. As you might notice, we seem to be back here, and there is good reason for this, but revealing that will have to wait until you buy the album!

S] What else have you got lined up to celebrate this momentous occasion?

Oderus] Oh, the usual; death, debauchery, savage sex and random violence. Popular television celebrities will meet hideous doom, and it will all be accompanied by the ear-splitting racket that only Gwar can provide! we shall spurn the earth with hoof and claw, mash and mangle, ass and maw! can i get a hell yeah? Hell yeah!

S] Gwar have always been active in a variety of mediums – are there plans for any more movies? Bob Gorman (one of the many gwar-tists) mentioned he wanted to do a gwar coffee table book, which would be superbly ironic…

Oderus] I don’t have a fucking clue. people point cameras at me, shove microphones in my face, and the next thing I know there is a new album coming out. As far as a book is concerned, I don’t know, I can’t even read!

S] When you first donned a rubber cock, did you think of Gwar as having a finite lifespan or that you’d go on to become world-conquering alien barbarians?

Oderus] we are immortal undying gods and are unlikely to disappear anytime soon, as much as certain governments and religious organisations would like us to!

Oderus] We can’t help it! When people’s heads get chopped off, blood goes everywhere. When I have an orgasm, even people in the back row know about it! but does this scare people off from coming to our shows? Hell no! In fact it seems to encourage them all the more! 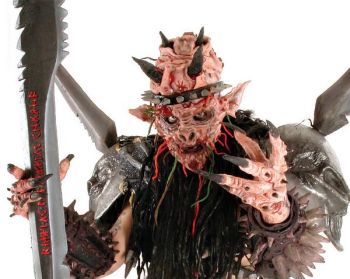 S] Gwar aren’t exactly the shy and retiring types, is it liberating for Oderus to say the things that, perhaps, Dave Brockie wouldn’t and couldn’t get away with without being locked up in Guantanamo?

Oderus] I am getting pretty sick and tired of being affiliated with this Dave Brockie character. apparently he has been running around saying he is me, or something… if I could ever get my hands on him I would put a stop to his lies, but he always seems to be one step ahead of me.

S] Has there ever been a point where you’ve felt that Gwar have ever over-stepped any arbitrary moral boundary or is everything still game?

Oderus] For Gwar to not over-step every moral boundary would be a crime against our morality, which is completely non-existent. Whatever we decide to do is perfect, faultless, and without question, no matter how filthy, disgusting, and wretched it may be!

S] Obviously a lot of time, energy and love has gone into creating the music, the costumes, the props, and the mythology behind Gwar. What’s the greatest misconception about the band that you’d like to correct?

Oderus] People think that we are a bunch of pimply-faced ex- art students from Richmond, Virginia…and not from outer space at all!

S] What have been Gwar’s defining greatest and worst moments?

Oderus] The greatest moment will undoubtedly be when i finish this written interview, which I have destroyed eight computers attempting to do! The worst moment? When i received it!

Oderus] It’s a tie between ‘America Must Be Destroyed‘, ‘Violence Has Arrived‘, and the latest one, ‘Lust In Space’. ‘America Must Be…‘ was our first really great sounding record. Even though many of our fans think ‘Scumdogs Of The Universe‘ is our best, I have never been happy with the production. ‘Violence Has Arrived‘ marked our return to metal, and I will always be proud of that. I don’t think the fans would have stood for another experimental album. ‘Lust In Space‘ is my favourite album yet. We just keep getting better and our new album is the best representation of our sound to date. I mean, all of our albums rule, so just buy or steal them all!

S] Aside from Gwar there have been various splinter groups like DBX, Rawg, X-Cops, are there plans for any future releases or new projects?

Oderus] People keep bugging the shit out of me about these other bands and I don’t know what the fuck they are talking about. Maybe that idiot Brockie would know!?

S] We’ve had Lordi, Green Jello and Haunted Garage. Why have Gwar conquered where others have failed? Okay, so arguably Lordi have done ok for themselves but, let’s face it, they were shit…

Oderus] We have never made music for any reason other than to please ourselves. It was never and will never be about money or fame, sluts or coke… well, maybe about the coke… and the sluts. Oh, I  don’t know, isn’t it your job to figure out this shit?

S] Have you guys considered where to take gwar once your two year celebratory cycle is complete?

Oderus] Not sure – it turns out that outer space is pretty lame and earth is the only place where you can find crack cocaine. We have never made it to Japan, have never put out a video game, and have yet to make a feature length film. Plus  I have yet to have sex with a living blue whale, a personal goal of mine. So I suppose for all of those reasons, and several less, that we are going to be staying right here!

S] Finally…since you have fucked each other, fucked animals and the dead – just what exactly is there left for Gwar to fuck?

Check out the video for ‘School’s Out’ below: