You can’t really ignore Hollywood Undead. They caught our attention when they opened Download and rocked the stage, and chances are you have heard both positive and negative gossip about the six-piece too. We set the record straight with the band’s vocalist J-Dog and talk about the band’s past and its future. 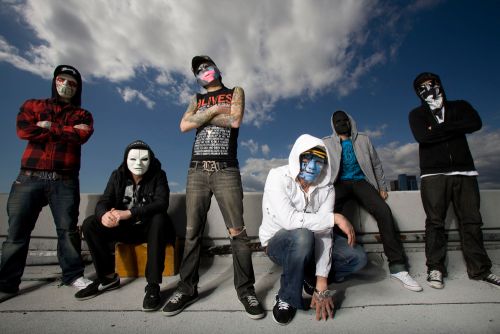 “We still hang-out at the same bars and in the same alleys, fame hasn’t changed us”

S] How was it at Download this year, you got a great response – what was the best moment for you?

J-D] It was amazing, they were chanting our name before we got on stage, we were the first band to open the main stage. I think that the best moment was my friend telling me how awesome I looked on the video screen with my handlebar moustache, I had it only for that show.

S] Can you tell us about the experiences that led up to the creation of the fan favourite track, ‘Undead’

J-D] We were frustrated, our record wasn’t getting released. People were trying to censor us and our completed record was just sitting there so we just said, ‘Let’s make a song against everyone and say whatever we want.’ It’s all about saying Fuck to censorship basically.

S] If each member of the band could sit one person down for dinner to listen to your ‘Swan Songs’ record, who would it be and why?

J-D] (laughs) Well, that would mean I would have to walk around and find all six band members and ask them and get an explanation. That would take over an hour. I don’t have the mojo for that. But mine would be Eminem, I’d be curious to see how he liked it. We all would be, I know.

S] The sound amalgamates rap, electronics and metal – it takes a lot of people back to mid-90s where a lot of “alternative kids” used music to vent frustrations and overcome adversity – do you believe that these ideas come across?

J-D] I feel our ideas and emotions come across. Music has been an outlet for people since the beginning of time. A lot of kids tell us our music changed them for the better or made them feel they can say or do what they really feel. That’s a good and positive thing.

S] Where does the inspiration come from for the more electronic and Industrial parts of your sound?

J-D] We all listen to that style of music, NIN are a big inspiration to everyone in the band. Working with Danny Lohner definitely inspired some of that. He’s a hero and a wacko.

S] “All great artists need something to hide behind on stage, be it a mask or just a pair of glasses” – despite the fact that you say that your masks are more of a fashion statement, how do you agree or disagree with this quote?

J-D] I Disagree, I’m waiting for the second I can take it off. It’s hot and sweaty and I can’t communicate as well with something blocking my face. I don’t wear glasses on stage but I know some people do so they don’t have to confront the crowd. Our masks are for fashion and a festive part of the show.

S] You guys are big on theatrics, how will the concept of Hollywood Undead progress through the stage show over the next year – are there any exciting new ideas for that?

J-D] We have a bunch of ideas if we can get money for it, I want to put a set that looks like Los Angeles behind the drums and towards the end of the show I want to have it start falling apart like an earthquake but you’d need hydraulics for something like that. I’d be happy with just some extra lights because we don’t have much right now. Maybe a set of wings so we can zipline Da Kurlzz across the stage.

S] Now that you have dealt with a number of personal ideas on your debut, have you put some thought into what ideas will inspire the next record and how the sound will progress?

J-D] Our first album was written about everyday stuff. We’re still out doing the same stuff. Even though our band has more fame I still go to the same bars, hangout in the same alleys, it hasn’t changed any of us. I’d like to see our second record get darker then the first, bands have to kinda progress or mature to stick around.

S] Your ‘Undead’ documentary was an interesting take on the “real” Hollywood and we wanted to know if there will be another instalment (perhaps an international version) and what kind of experiences you would to document next?

J-D] Like I said, we’re stilll out doing the same thing so if we were to go out with cameras again you’d see a lot of new stuff because if you’re out and about everyday your going to see something interesting. We’ll see how drunk we get, but then you’ll probably see us fighting with each other.

S] What are your biggest plans for the year once you finish your tour in August?

J-D] We’ll go to Japan for a few days, A few fly-date shows, Mainly though, we’ll take time off and write new music. We’ve been touring so much with no time off and so we’re all starting to fight and put stuff in each other’s bunks to piss each other off. Stuff like rotten bananas and other crap.

S] When can we expect you back over here, and do you have a message for some of your friends in the UK?

J-D] I think at the end of the year, though I’m not sure exactly. I don’t remember the city I was in last night so I get confused sometimes. For a message – you guys were awesome. I was surprised how well we got embraced and all the love we got. It really made us want to go back, and I’m openly challenging some of the kids to drinking contests right now.

Check out the video for ‘No.5’ below: