Innerpartysystem have created quite a stir since exploding into the alternative world with their infectious crossover style, perfectly blending hard rock and electronica. With SPHERE it is no different and since their debut self-titled album is undoubtedly our ‘disk of the year’ in 08 we felt it necessary to grab a member of the band for a quick chat and drummer Jared Piccone kept us entertained… 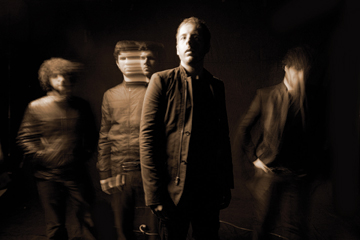 S] Innerpartysystem are being hailed by many in the UK as the future of the ‘crossover’ genre, how do you feel about the state of the scene currently?

J] It’s hard to say. I live in another country, and in that country I spend a majority of my time on a bus without TV.  Besides checking out NME.com or Kerrang.com here and there to listen to new bands, I’m massively out of touch. When I am in the UK, I only see the bands we play with. Otherwise, I’m in a splitter traveling, or in a hotel room watching late night T.V. I always end up spending my money on food and beer, so rarely do I have enough cash to pick up a rock magazine. Come to think of it, now that I’m as deep into the world of music as I am, I don’t think there was ever a time I’ve known less about it. I do hear of new stuff coming out  just from chatting with people, but for the most part, I’ve never felt more out of touch with what’s current. It’s depressing. I make a lot of excuses, but at the end of the day I guess all I have to do is just try harder. But sometimes you just get so engulfed in what you are doing, with trying to make your band work, nothing else matters for a while. I think I’m kind of stuck in that frame of mind right now.

From what I see it seems to be thriving I guess. There’s a ton of awesome bands, lots of kids are going to shows. What else could you ask for? But like I said, I’m in your country a couple of months out of the year. So my judgement could be a little off.

S] What have been some of your best experiences touring the UK this far, and when will you be returning?

J] Touring in general in the UK is always a great experience. We seemed to have hit quicker there than in the States, so the shows have been a bit more exciting. People seemed to get it a bit quicker there than in the States. We played a few huge shows this summer, Projekt Revolution, Wireless. Those were definitely days I will never forget. I’d have to say Projekt Revolution at the Milton Keyes Bowl with 50,000 was the most memorable experience I have had in this band to date.

S] To what extent was your notable single ‘Don’t Stop’ penned as an anti-anthem so to speak, and can you also explain the personal significance of the line ‘I’ll buy my way to talk to God, so he can live with what I’m not’?

J] That whole song is written through the eyes of another person. Another person that’s willing to give up everything in order to be in the public eye. He or she knows that the more wreckless and vain they are at pursuing this, the easier it’s going to come. Because we as people are addicted to watching other people’s lives fall apart. Most of the time this is actually taped and aired weekly on national television. That line is simply further describing this person’s intentions, and poking a little fun at some people’s take on the concept of right and wrong. “You can sin all week long, but as long as you fill that basket with money, everything’s going to be okay” is the concept we are making fun of there. This is how the person deals with the guilt. Just like so many other people do. As long as they show up to church and their friends and neighbours see them and it looks like they are doing the right thing, then all is okay, regardless of where their heart and mind are really at. To answer your question, there is no personal significance to that line. It has nothing to do with anyone in this band’s religious beliefs, nor is it pointing a finger at anyone other than the ficticious character we wrote this song through the eyes of.

I feel like people miss the big point of this song, although many will argue this song has a few different points. The main thing to me is this, just like the chorus says, this is entertainment, lies are entertainment. That’s it. Just like a movie. Just like a comic book. Just like your favorite bedtime story. None of this shit is real. We all go home at the end of the day, eat dinner with our parents, play with our pets, mow the fucking lawn, whatever. There’s really not anymore to it than that. Being in a touring band is no different than being in a traveling circus, or in a broadway play. We made an act, and now we are touring around showing it to people, to entertain them.  None of us have any deep seated hate for mass media. We just saw something that struck a nerve with us (that something being the three plus months of media coverage when Anna Nicole Smith died), and wrote a song about it.

S] You have a powerful visual element to accompany your music and you place emphasis on exploring all facets of multimedia within your shows – how important do you think it is to push the boundaries of live performance to hook your fan base?

J] I wouldn’t say we do this to hook in a fan base, although having more and more people become a fan of your band is obviously never a bad thing. We push the boundaries of our live performance solely because we think it’s AWESOME. We play hard, we have too many lights for the size venues we play, and it’s usually too fucking loud. That’s the way we like it. That’s the way we want to see a show put on. We want to over stimulate for no reason other than it’s fun. It’s kind of an addiction. We started as a pretty normal band, in the traditional sense (just us and a few keyboards), and then we just kept going from there. Pushing it every show. Now we have so many lights I curse myself everyday when I’m lugging them into the club. We are breaking more and more shit, just from playing and hitting things harder and harder, and my own parents don’t even like coming to see us because they always complain we are way too loud. Fuck it. I do this for me.

S] Was the chocolate 7″ vinyl idea for the ‘Don’t Stop’ release just for ‘fun’ or was there a deeper meaning behind it? How did the idea come about?

J] Yes, that was strictly for fun. I’m sorry, maybe this interview is making us look like a bunch of idiotic shallow dudes. ‘We do dis cuz we thinks dis looks kool.’ But really, you hit the nail on the head. We started researching different and unique ways we could press a record and came across this company that presses chocolate records that actually play. We were far too curious to see if it actually played not to get them pressed. We had to know. And they actually do. Really, that’s it. If you ever get a chance, freeze one, and play it. and you’ll do the same thing. No deep dark poetic meaning. The chocolate record spinning on the deck isnt some metaphor about life or love or anything like that. You’ll just look at it playing and go, “Wow, that’s pretty fucking cool.” And that’s it. It’s all just entertainment.

Here’s a short live snippet to whet your appetite for destruction before IPS invade UK soil with their tour in the new year, enjoy:

Innerpartysystem will play the following dates in the North of England in February: LEEDS Cockpit (02), NEWCASTLE Academy 3 (03), MANCHESTER Academy 3 (04).

For more information visit the Website and Myspace links.