Recently SPHERE were lucky enough to have the opportunity to conduct a Q/A interview with multi-talented “robo-armed” drummer Joey Letz, who has played for an impressive array of bands including Combichrist, Amen and Burn Halo. We discuss his technique, favourite moments and grafitti’ing on fans.

S] Your live performances are notoriously frantic…what is going through your head when you play? Does this vary as the pace is different in Combichrist to say Burn Halo or Emigrate?

JL] “To be honest nothing much is going through my mind when I play.  I have a routine that I run through before every performance that puts me into a pretty deep meditative state.  over the past few years I’ve started experiencing this really interesting thing while I am performing where I can consciously bring my mind out of the state I am in and just look at my body moving without thinking about what I am doing. I just watch my arms and legs running on auto pilot.  It’s actually really freaky.
This doesn’t really differ from band to band. Sometimes I won’t even like a band that I am considering working with until I learn the music.  Looking back I have auditioned for some really abstract bands.  Most of them are pretty surprising considering my style, but overall it is the music that I now identify with.  Through learning the music and expressing emotion, I feel it has become a part of me.”

S] What has been your best live experience in the UK so far?

JL] “Aside from London, which is pretty much always a given 10 out of 10, I always really enjoy playing in Manchester.  I played the Academy with AMEN in 2004, and again with WEDNESDAY 13 last year, the crowds are always sick. I remember picking up my AMEN drums for that tour, which I had not used in four years. These were sitting in a friend’s attic in Stevenage and they were bright orange. The first Wednesday gig was in Manchester and I bought some spray paint and just unloaded them and painted them a couple hours before the show right in the rain. Actually, a few fans saw what I was doing and asked me to use some of the same stencils that I was using on the drums for their clothes and I graffitti’ed some kids up.

Also, I’ve been playing The Corporation in Sheffield with COMBICHRIST my past couple of European tours, and I really dig the club they have there after the show every time.  There aren’t really rock clubs like that in US, although i must admit that I am partial to gay 80’s music and ‘tranny’ clubs on the lower east side of Manhattan.”

S] As you are skilled in a multitude of styles, what keeps you interested in Industrial/Electronica specifically?

JL] “I’ve become really used to playing to a click track, and totally prefer it now.  After a while I don’t even hear it anymore and it just becomes a part of my subconscious.  Also, in this style music, I find myself playing along to a lot of samples and effects that I wouldn’t find myself playing with any other kind of music. That is not to say that I don’t play using a click track with rock music, but it’s a necessity for this genre because of all the other shit that is happening live that I need to play along with a click track. It sounds a lot cooler to me than a guitar!”

S] You do a lot of writing and guest spots for other bands besides your main projects – do you ever take a break and what do you do, where do you go?

JL] “As of three months ago I now get to play Mr. Mom!  When I am not on tour I get to stay home with my son and be a housewife!  It’s the coolest existence ever to be honest.   I’ve found a total new love and inspiration that is totally unexplainable.  I would say that I have the two coolest jobs in the universe and I get to do one when not doing the other.” 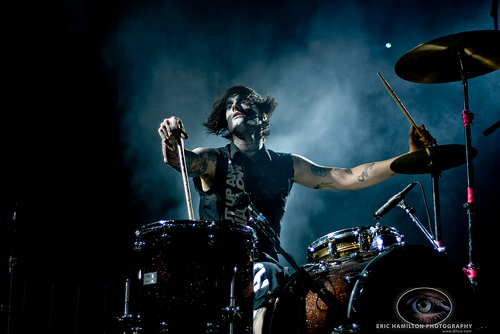 S] What advice would you give to young musicians who perhaps struggle in education and have a difficult background but find support in playing drums?

JL] “I know that there are a million kids who are in bands and want to “get signed” or “make it”, but I honestly don’t really feel that a lot of them are cut out for this kind of life.  I have been in situations where kids finally get to go out on tour after trying all these years, and they totally lose it and never do it again. With me, I have known that I wanted to do this since I was young, and if you ask anyone that grew up with me, my parents included, they’ll tell you that I was convinced that I would be doing this since I was 14 years old and I was very vocal about it.

My best advice would be to be SURE that you can handle something like this, and trust me; you’ll know if it’s inside you, you’ll feel it. If this is the case… go for it.  Don’t care about money, don’t go to college, and don’t care what anyone tells you, parents, friends, girlfriends, even BANDMATES!  Go for it on your own if shit ain’t working out with your band, that’s what I did! Just go set your mind on it and figure it out. If you EVER doubt yourself, consider that every single one of your idols, be it Ozzy Osbourne, Trent Reznor, or Britney Spears… were all born normal people, just like you and I, and had a GOAL and stopped at nothing to achieve it.  Anything is possible and I also always told myself that I wasn’t going to dream,  instead of having “dreams” I set “goals” and that made things more real for me, I don’t care about back-up plans. Having one is setting yourself up for failure, and not having one makes you hungrier for your goal.”

When you go to pick up Rock Band 2, check out Joe doing his thing on the cover! You can read more on this at his official Myspace blog and his Myspace: www.myspace.com/joeyletzdrums

Thanks very much to Joe Letz for giving up his time for us and Thank You for reading!