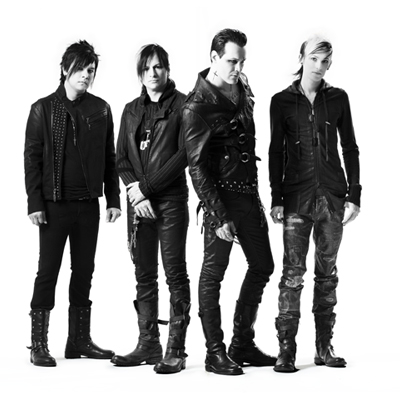 “Julien-K will be viewed as an artistic force, not just as a band but as a lifestyle”

S] You had the opportunity to come to the UK last year with Linkin Park on tour, unfortunately we missed out, what are you most looking forward to about coming over again?

Ryan] Actually, we had to cancel the European tour with Linkin Park. We had a crisis back home and the whole thing was possibly the biggest disappointment of my life. We feel that Europe and the UK is going to be a huge market for us, and the requests and fan love that we get from UK is ridiculous. We are currently strategizing a way to get over there as soon as possible.

Ryan] That’s a simple answer, I grew up on bands like Slayer and Depeche Mode, New Order and Metallica. These disparate brands of music really appealed to me, and I wanted to find a way to deliver the best of both those worlds. Dark, passionate song writing, heavy music expressed in an innovative way that’s usually based around the use of electronics.

S] JK is much more than just a band – how do your production and DJ commitments fit in with the music, do they act as a different form of musical expression or release?

Ryan] Basically, we think of JK as a production group, a band and an artist collective. We produce records, we are three live bands, we DJ, we score games and movies, design clothing and we even own some restaurants. They are all different forms of art, and we love all of it. To be really honest, we’re just a group of long-time best friends that want to create art together.

S] How will these things work into the future of the band and how will the whole concept of JK progress this year?

Ryan] I think the Julien-K will start being viewed as an artistic force, not just a band, but as a lifestyle. Clothing, design, music and performance, this is what we do and how we live.

S] A lot of your songs are based on personal observation of people or the world around you, We know that you all contribute but where is your favourite place to write lyrics, where do you feel most comfortable and why?

Ryan] I tend to write quickly, on the spot. Right when the music is being created. I constantly sing ideas into a voice recorder that I carry around, but I seldom get to digging through all the ideas and finally making something out of them..

S] You have a lot going on at the minute, members of JK are working on the new Dead By Sunrise record alongside playing some shows, but what are your biggest plans for this year and the things that you are most looking forward to unleashing upon the world?

Ryan] Well, we will have two fucking records out at the same time. We will be working constantly, with little time to think about it. We are going to try to tour both bands for the next year. At the same time, in between each other’s tours, whatever works for us. I think when both records hit later this year, the world will understand just how important our work is.

S] There seems to be a real bond between all the members of JK, as previously mentioned you have been working together on a number of projects over the years, how does that bond translate when you are making music together in whatever project?

Ryan] There’s a total lack of ego, except for me. We can totally destroy each other’s idea’s with no fear of ill-will or bad feelings. We do what we have to do to get the best product. No excuses. No mercy. Our friendship enables this kind of singularity of focus.

S] What do you most look forward to happening when JK and Dead By Sunrise tour together soon in States, it sounds like it will be tough work as you are in two bands, but a lot of fun?

Ryan] We’re not so sure yet that we will be touring together, so we’ll have to wait and see.

S] Can you describe a typical day for the members of JK, you seem like you are always working on new material, what does a relaxing day involve?

Ryan] Well, everyone in the band is different. We have different duties. Speaking for myself: I wake up to about 80 e-mails regarding business, these are very seldom personal, and very seldom fun, takes me a few hours to get through everything. These e-mails always lead to phone calls that last all day. I work out every day, so I shove that in somewhere, somehow. I try to stop in at my various brick and mortar business’ including my three restaurants. Music and creativity usually starts in the early evening. Studio is at my house, as is my office, so my house is ground zero. Makes for lots of 15 hour days. There is no line between business and personal. As far as having a relaxing day, I’ll relax when I’m dead.

S] How do you think the world will end – Is it all about androids and robots?

Ryan] The world will end when I say so. Androids and robots? I sure as fuck hope so.

Check out the video for ‘Kick The Bass’ below:

*Thanks to the band and Rey at Reybee for setting this up.