Formed way back in the mists of 1992, The Pain Machinery are of one Sweden’s most venerated and acclaimed industrial bands. A punishing roar of electronic rage combined with a none-more-punk D.I.Y. aesthetic, Anders Karlsson’s aggressive musical persona is a world away from the affable, somewhat shy character SPHERE is more familiar with. With their ‘Total Recall’ EP having just been released and new album, ‘Urban Survival’ on the way, SPHERE caught up with Anders to find out more about the man threatening to bust out from Stockholm’s Industrial ghetto and firmly plant a Doc Marten in the face of musical apathy. 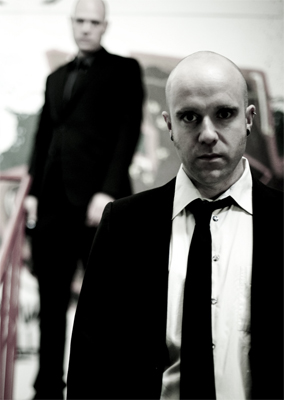 “A TPM gig is always about total energy and presence”

AK] Well, the album ‘Urban Survival’ (out early 2010 on Advoxya) has been finished for some time now. It’s a pretty brutal album, dealing with the darker aspects of urban life. The tracks address subjects like paranoia, alienation and the rise of surveillance culture. The ‘Total Recall EP‘ (out now) is a bit more streamlined and electronic sounding. It’s raw, minimal and pretty catchy and features some remixes from ‘Urban Survival’ as well as reworks of tracks from earlier albums and some exclusive tracks.

S] The UK seems to be turning into an oppressive police / nanny state with the government trying to induce a climate of fear in order to keep us in line – CCTV, email monitoring, and more – obviously this is a major theme on your new album, how does this correspond to life in Sweden at the moment??

AK] Well in some ways 1984 is indeed upon us. Nowadays there’s a lot of CCTV in Stockholm as well. They provide a sense of security to some and the opposite to others. The thing is, these all-seeing cameras don’t prevent crimes from happening, and the police hardly

solve any crimes using the filmed material. On top of that, surveillance is slowly becoming internalised through social networking sites tracking social interaction, individual consumption patterns and so on, but it’s become so easy to misuse all this new technology. Paranoia is awareness.

S] How did the switch from BLC Records to Advoxya come about and what do you think Advoxya will bring to promoting TPM?

AK] It was time to try another label. There’s no bad blood whatsoever between TPM and BLC Records and I wish them the best of luck in the future. Hopefully Advoxya will do a good job in promoting the new releases, making them available and getting more people to know about The Pain Machinery, but it’s important for a label to understand that promotion means more nowadays than ever before.

S] What do you think of the way the Industrial scene has changed over the last few years and have these changing trends affected TPM?

AK] When we’re talking about the more mainstream electro-industrial scene, there’s still a lot of aggrotech and hellektro coming out. I’ve never connected to that kind of music at all – 90s eurodisco / trance through a distorton plug and some goblin vocals on top. I really don’t know how those trends have affected TPM. It’s pretty far away from what I listen to or want to produce myself. I keep on doing my thing, together with like-minded people. On the other hand there’s a lot of cool music coming out in the alternative dance scene. In my opinion a lot of that stuff has got more in common with TPM – and the original Industrial and EBM scene.

S] Is the Swedish Industrial scene as vibrant as it once was?

AK] I believe that the Swedish scene is alive and kicking. There are a lot of cool bands, at least in the underground. We in the TPM camp are on 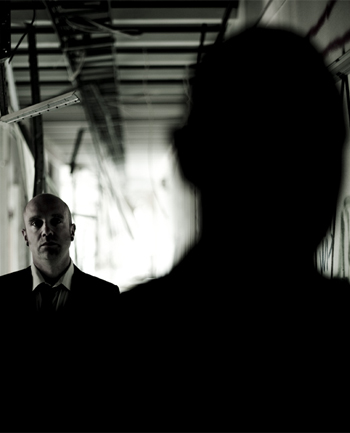 friendly terms with a lot of the bands from the Swedish scene. Container 90, System, Run Level Zero, Dupont and Necro Facility, to name a few, are all very cool people. In all honesty though I think we would need a few more big names to keep the music alive and reach more people outside of the scene. Right now there’s Covenant and that’s about it.

S] Chemlab’s Jared guests on a couple of tracks on ‘Urban Survival’, how did you guys first become acquainted?

AK] I met Jared in London some years ago. I think he’s a great guy. He’s a really easy to talk to and a down to earth person.

S] What made you think he’d be a great contributor to TPM?

AK] I love his attitude towards music as well as his voice and lyrics, and since I knew that he liked TPM and I asked him if he’d be interested in doing lyrics for one track. When I got the vocals they really blew me away. It was a perfect fit with both the music itself and the general theme of the album. He ended up doing vocals for three tracks and I’m very happy with the results. Hopefully we will do some more stuff together in the future.

S] It’s been a while since you played the UK – what do you remember from the last time you played here?

AK] It was one hell of a party. We had a great time playing in London and Nottingham. I really like Britain and British people.

S] How much of your live show is “live” and what do you think of bands that are over-reliant on backing tapes?

AK] It’s a problem if you get “lazy” and just let the backing tape do the job. There are lots of bands standing behind keyboards on stage that aren’t even plugged in. On the other hand, Dive does an awesome live show. And that’s usually just a backing tape and Dirk Ivens with a microphone. As for myself I really don’t care if artists are “playing” on stage. I’m not interested in seeing a guy performing “an awesome guitar solo”. As for TPM we always work hard on doing live versions that are different to the ones on the albums and we often do tracks that are exclusive for one particular gig. Sometimes we use acoustic drums and bass, sometimes it’s more stripped down. A TPM gig is always about total energy and presence though.

S] How has the TPM live show changed over the years? What lessons have you learnt from playing live?

AK] In the beginning we experimented a lot on stage. Sometimes it worked very well and sometimes…not all that well. Over the years we have become a lot more focused. We leave less room for mistakes nowadays even if we still experiment quite a bit.

S] Does the live show impact on the way you now write TPM tracks?

AK] Yes, we test a lot of new songs on stage. That’s an instant way of seeing whether a particular track works or not.

S] You’ve been working as The Pain Machinery for years, have there been points where you’ve ever doubted yourself and what you’re doing?

AK] No, never. I believe that you always have to follow your heart. I knew from the beginning that this would be an underground thing. This kind of music isn’t for everyone.

S] There’s a fiercely old-school vibe to TPM, which bands have had the greatest impact on the TPM sound and attitude?

AK: I come from a punk rock background. That had a huge impact on my attitude towards music. My electronic and Industrial influences are very diverse, from producers like Adrian Sherwood and Richard H Kirk, bands like Cabaret Voltaire, Skinny Puppy, DAF and Klinik. I really like the primitive, dirty grooves those early pioneers managed to produce.

S] And which bands are currently rocking your world?

AK] As I mentioned before there’s a lot of cool new underground dance music coming out. Bands like Portion Control are always relevant. I really enjoy some of the newer UK bands like Kloq and Motor that infuse their Industrial / EBM roots with acid house and dance music. The new DJ Hell album is cool as well and I really hope that we get a new Klinik album with Dirk on vocals soon. And I need to get my filthy hands on those remastered Kraftwerk albums!

AK] I love cheese! All kinds of cheese, cheddar, parmesan, stilton you name it. As for cheesy music I’m a big fan of new beat and the early rave scene.

AK] Stay open minded. There’s a lot of great music out there! Also, please check out the new The Pain Machinery releases and catch us live if you can.