Ahead of XP8’s exclusive UK date in London (re-scheduled from Sheffield), we chat to band member Marco Visconti about touring, the industrial scene and the latest album, ‘Drop The Mask‘. 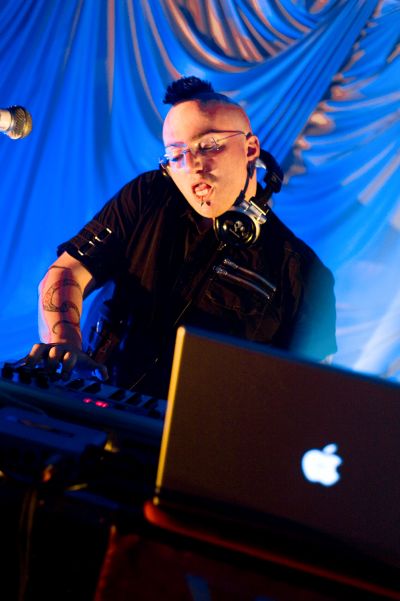 S] It’s a shame we won’t see you in Sheffield! What are you looking forward to about playing in London?
M] It’s been a shame indeed. Lots of people were waiting for this concert, and while fans should really start to understand that buying presales is what gives the venue putting up the show even more drive to keep on organising gigs and club nights, there were some bad calls made. Fortunately though, Slimelight‘s management stepped up in no time and gave us the chance to come and play again for the British crowds. This will be our third Slimelight gig, we know and love the venue, and we know it’s always a blast over there. So, in the end, it might even end up much better than we thought.
S] Last year in an interview with us, you said that the new album ‘Drop The Mask’ was about “dropping” the facade that we all hide behind as people, and that its more personal – how did this theme evolve in the writing process?
M] The whole “dropping the mask” came to be when we decided to write the music we wanted without trying to please anyone, without writing this album “for the scene”, but just for us and for our true fans. Hence, the difference between the tracks of the album and between the album itself and basically anything that’s being released these days. XP8 always had a very personal sound, this time we just pushed this personal style even further. Clearly, those who never “got us” and prefer to listen to the next clone, won’t be listening to us with this release either: but we just stopped caring – art and inspiration just dries out when forced in this or that direction.
S] Tell us how the art was produced and what that process was like?
M] Well, despite our plans, Amelia Arsenic of Angelspit in the end could not work on the album’s artwork, as she was busy with her band. Pity, since we really love her style. Fortunately though, we found in Anna Lucylle, a rather famous scene photographer and graphic designer here in Italy, the perfect match for the ideas we had for the album’s graphic: it was only a matter of contacting her, letting her listen to the songs, and fine-tune the whole process with a bit of brainstorming.
S] The industrial scene, it really is one big community, what bands on the UK (and worldwide) scene are you most enjoying at the moment?
M] To be honest, I find myself less and less interested in the industrial scene these days, it has become way too stagnant for my tastes, and way too dominated by trends imposed by Germany. These trends I never really liked first-hand. I mean, we don’t need more albums about rape, blood or serial killers. It’s just too childish for me – or maybe it just means I’ve finally become an old fart! One band I recently discovered that I’m really loving is A Place To Bury Strangers, and yet another is innerpartysystem. Check them out!
S] ‘Out For Blood’ is one of our standout tracks – can you tell us what ideas went into making this track particularly?
M] You too think it’s one of the best tracks of the album? I certainly agree. As with everything that ends up being good, this one has a quite peculiar story behind it. Basically it all started with me and Marko [Resurreccion] messing around, trying to make a sort of harder, edgier track than some of the others we just finished work on, but no matter what we couldn’t seem to get the right balance between hardness and melody. At the same time, I heard again from DJ Dolly, whom we met the previous year first here in Rome, when she flew in to spin at the Ritual Fetish Party, and then in Denver, during our USA tour with System Syn, where she DJed at the afterparty. It was then she told me she was also a singer (on top of being one of the best DJs I’ve ever heard – and being one myself, I’m quite picky), so we thought to send the track over for her to sing on. The results were outstanding, as you can hear!
S] You worked with post-punk band She Wants Revenge for ‘Out Of Control’ – how did that come about? 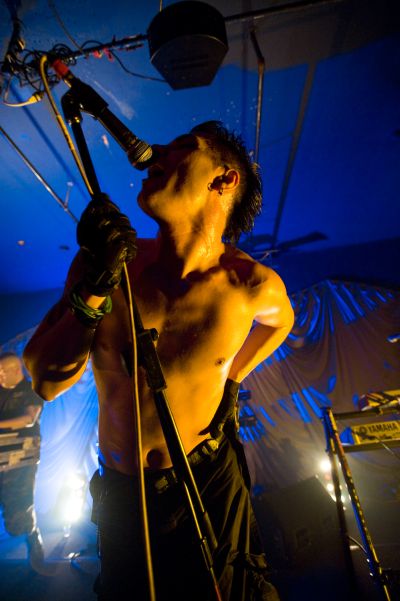 M] Actually, we did not work with them. I surely wish we had though! We just made a cover version of their track, and the labels provided the legal mumbo-jumbo to publish it. We’d love to know what they think of our version though!
S] What was the aim with ‘Our Time Part.2’ – the last track on the album, it’s a much heavier track than the others on the album, it’s almost a rock ballad?
M] Rock, you say? I hear much more of Skinny Puppy in it, than anything rock! We basically loved the concept of ‘Our Time’ and wanted to express it again, but this time with a complete different feeling than the original, dancier version. To do so, we teamed up with Marc Horstmeier, from C-Drone-Defect, and he lent us his skill and bombastic choirs. We wanted the album to end with something memorable.
S] As a successful band in what is seen as a niche genre, what keeps you inspired and able to keep going?
M] I’m afraid that I don’t see us so as so “successful”, and the reason is behind the mere fact we operate in such a niche genre. There can’t be any true success here, as bitter as this might sound: this is a small and ever-shrinking scene, and it seems like the younger generations get attracted to it only because of the flashy or scary looks, go to clubs for a season, and then disappear. Like I said, it has become very, very stagnant, and the future doesn’t look too bright either. What keeps both me and Marko to keep going is the fact that we love to express ourselves with music, with this kind of music most of all.
There’s no “pursuing success” with us, we just outgrew that illusion some years ago already – especially after some experiences that let us understand that if you are not with the right elite labels in places like Germany, lots of doors will always be closed to you, no matter what. But then again, isn’t this true for everything in life? It doesn’t matter what you do or who you are, but who you know.
S] What has been your best experience in the UK so far, on-stage or off?
M] I think the months I spent in London back in 2001 and 2002 are surely some of the most memorable moments of my life: I was young, very cyber, and back then the scene was thriving. It was really a moment of “sleep all day, party all night”… definitely one worth living. I could tell you more about exactly what was happening these days, but then I’d end up in jail, so let’s keep it like this!
S] What are your biggest aims for the rest of year?
M] Playing the shows we have already announced and be finally able to go back to the USA and Canada this Fall for a new tour over there. We can’t wait to meet our crowds again, so to speak! I’m also trying to make xp8.org more and more interactive, and being present on Facebook, Twitter and the like seems something very much liked by those who follow us: a sort of direct link between the band and the fans is vital these days, and I’m planning to improve that even more than what is today.
A new video is being planned as well. After the success of ‘The Art Of Revenge’, we’ve been talking with the director, Carlo Roberti, for almost two years now about a new screenplay for one of the songs of ‘Drop The Mask’, but somehow we still haven’t found the precise idea to develop. So, we might end up wait ’till the next release. In the next few weeks we’ll release one for our 2005 songs ‘The God Particle’ as part of the soundtrack to ‘La Particella Di Dio’, a film-documentary about the work of Massimo Corbucci, the Italian physic who proposed an alternative to the Higgs Boson theory. The director offered to make us a video for the song as well, using images and scenes from the movie itself, and the end result is quite cool!
XP8 will play London’s Electrowerkz venue on May 15.
For more information visit the official MySpace.