We recently had the chance to chat with Marco Visconti and Marko Resurreccion of XP8 about themes and ideas behind the band’s new album ‘Drop The Mask’. We also talked a little about the industrial scene and some big plans for the future… 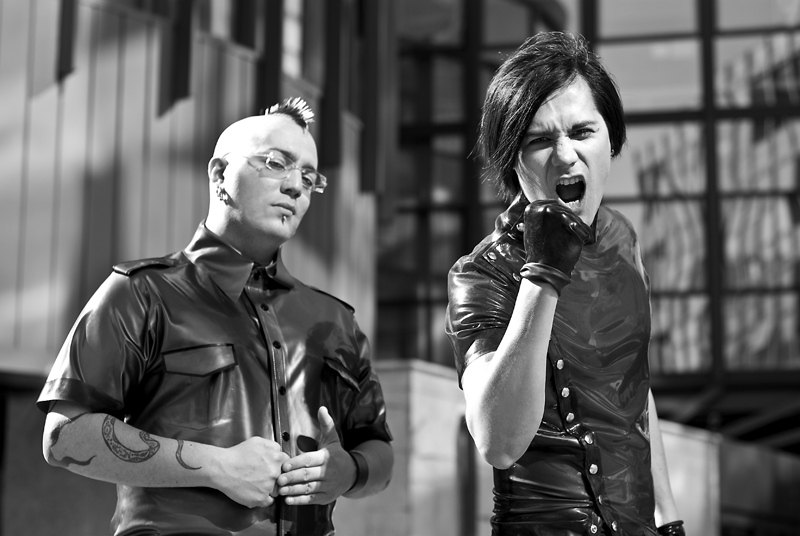 (L-R: Marco and Marko)
“We will sleep when we are dead”


S] How will the new album see a progression thematically from ‘The Art Of Revenge?’ and in-turn the evolution of XP8?

XP8] We see the next album as a real evolution for the XP8 sound, whatever that might have been till now. We’ve grown lots in the past year, especially thanks to the US tour of last summer, where we had the chance to test our songs in depth, learning what we do best and what we should get better at or stop doing altogether. Thematically ‘Drop The Mask’ is all about honesty and removing the facade we all hide behind. It’s a very personal and heartfelt collection of songs which has the welcome (for us) side effect of making it less monolithic than ‘The Art Of Revenge’; it’s a lot more stylistically varied reflecting our tastes and all our influences. One might argue XP8‘s records have always been more a collection of “songs” instead of a list of “tracks”, something sadly quite common these days in the so-called industrial-ebm-goth scene, and quite certainly this is one of the reasons why it took us so long to get recognised and build up the solid fanbase we have today. While most other bands just go for the rehashed formulas that have proved successful already but thus destroying any artistic endeavor in doing that: with ‘Drop The Mask’, our search for individuality is even more true.

S] You recently remixed Left Spine Down – do you have any more mixes planned this year?

XP8] Yeah, we have lined up remixes for C-Drone Defect, Spiritual Front and Italian newcomers Surgery, and quite certainly other requests will pop out…they always do! We are especially interested these days to try and remix bands from outside of our scene, to get a song that was never meant for the dancefloor and twist it to the point it will infect anyone at your local club; it’s a task, but we like challenges.

S] Can you explain to us the differences between how you are received in the UK and the US; in your opinion, is there a major difference – you have only had positive reactions thus far from both?

XP8] You will never get flat out positive reaction for audiences as wide as that; that’d be wonderful, but alas totally unrealistic. That said people coming to our shows on both sides of the pond seemed quite appreciative. Differences lay in attitude more than anything else, where the US crowd most of the time gave off a vibe of wanting to have a good time and party, the UK punters can be more judgmental and “stiff” and you have to work them harder. They can be more rewarding. Case in point, our last gig at Slimelight in London was in May last year; we played a pre-club night show, and the concert floor was almost sold out, with people dancing and singing along to the songs.

S] You create songs based on personal experience but that identify easily with your listeners – taking this into account which song are you most proud of (from your entire catalogue) because of the way people respond to it?

XP8] That’s a tough question. It’s difficult for us to be proud of our songs because we see all the work and defects and near misses and whatnot that go beyond the pure listening experience. While we are by no means total perfectionists, still we see songs as processes and not as finished products. That said we are really glad that people appreciate simple tracks like ‘Waiting’, ‘Your Nature’ or ‘Muv Your Dolly’, because those are very dear to us.

S] The title ‘Drop The Mask’ is fascinating and is open for interpretation; does it have a different meaning for each member of the band?

XP8] ‘Drop The Mask’ is both a call to honesty and directness as well as a consideration on the place in life we are at, and we both believe that great rewards await people who start taking stock of who they really are and work on their hung ups and fuck ups. We decided on this title and theme for the album together, like we always did on each of our previous releases as well, so we do share the view. While we still have to do a proper “concept” album, every XP8 release so far always had one underlying theme we strongly identified with at the time.

S] XP8’s ideas are influenced by a lot of visual materials like art – can you tell us about the biggest visual influence on ‘Drop The Mask’?

XP8] We’re going to be very honest here; we do have strong ideas on what should go along with our songs when it comes to visuals and art, but we are not visual artists ourselves, at least not up to the level we’d like to be, and so we always left the visual interpretations of our music to those who are really capable in that field. What we can actually tell you and the other SPHERE readers is that this time the artwork and visuals will be taken care of by Miss Amelia Arsenic, also known as DestroyX of Angelspit; we are both avid fans of her work, and she immediately captured our scattered ideas and put them to some good use. Just wait and see for yourselves. 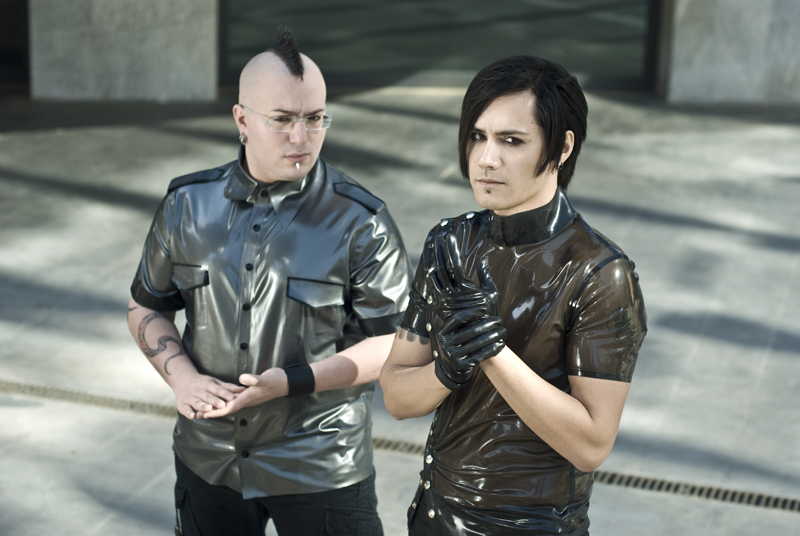 S] Your lyrics are suitably personal and somewhat dark as are the themes on previous albums and particularly on ‘The Art Of Revenge’ – would you say that you are in a more positive place (given that you have had such a positive last year) as writers for the new album?

XP8] Well, Marko, who’s the one responsible for most of the lyrics, is definitely not in the fabled “positive place” right now, but we both reckon life is all about striving for that feeling and never achieving it; the unbalance that makes life worth living. 2K8 might have been very positive artistically speaking, but it was also a very problematic and stressful year for him, as he went through a lot of personal stuff and changes that obviously reflected in the lyrics of ‘Drop The Mask’. We have the feeling that this will in fact be our “darkest” album so far, even more than ‘The Art Of Revenge’ has been…

S] Obviously the electro-industrial scene the world over is a niche’ but we have always admired the great family element to it – you guys are linked with a bunch of great industrial acts from Modulate to Mortiis via Assemblage 23 – how does this great sense of community inspire you?

XP8] WE can only say it’s great. Back in the 90s we were struck by how the US industrial scene intermingled and spawned so many collaborations, crosspollinations and side projects. Being part of this world now makes me realise how easy it is for such a thing to happen, i.e. going to festivals, remixing other acts, even just buying records or logging on to forums, expose you to a lot of great people who are just like you, on the lookout for inspiration and new stimuli. The downside of it all is once again brought by this internet age, and its forums made of instant experts who feel the right to diss and criticise everything on no basis. In turn these people are unable to take any criticism themselves, or even just a different point of view. It almost feels like we finally built the artistic community we have been striving for only to find that we are all devoid of “fans”, and instead we are being confronted by people with almost no respect for anything and who just demand stuff for free.

S] The new record is nearly done, so (as much as you can tell us) what are your biggest plans following its release and how will you be relaxing?

XP8] Relaxing?! Oh god no. As they say; we’ll sleep when we’re dead. We’re planning all sorts of touring schemes, promotional web-only releases, more remixes and a public display of immaturity. We can already tell you that right before the summer will kick in, we’ll release a free online EP with outtakes and remixes from both ‘Drop The Mask’ and ‘The Art Of Revenge’, and that we are planning two videos this time to promote the new album. So expect to keep on hearing more and more from XP8!

Check out the video for ‘The Art Of Revenge’ below: