ANGELSPIT are without doubt one of the finest new talents to come out of the Industrial scene in recent years. SPHERE  were lucky enough to chat with the band’s mastermind ZooG and ask him 12 very important questions about inspiration, thoughts on new music and the future. 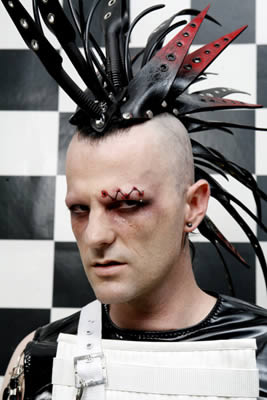 S] You are known to be very supportive of Goth and Industrial Culture in your native Australia, can you tell me a little bit about the various collectives that you and Destroy-X are a part of and how they have developed – are there any in the UK for example you know of?

ZooG: “We started with Vox Populis Zine Distro. This was a punk zine distro that promoted free speech and artistic expression through zines. We had zines from all over Australia and the world. Vox Populis was awesome!! THE REVOLUTION WILL BE PHOTOCOPIED!

We’re currently working with BAAL. It’s a really cool website that is run by artists, musicians and designers. Surgeon-X.com focuses on getting artist’s creations to the Dark Community. Several bands, plus hair designers, jewelers and artists all help each other with promoting a truly unique and alternative fashion and music store.

It’s important to understand that in all of these ventures, we are a part of a team. These projects would not happen with out people like Avanti, Vic, Dave, Sharni, Daniel (from Empty), Roby and John (from The Tenth Stage) and Ross.”

S]  What does Cyberpunk mean to Angelspit and how does the style inspire your work?

ZooG: “To be honest, I do not know. Cyberpunk used to be about hacking, mirrored sunglasses and an undercut – but it think it has moved on so much more now.
We are all living in a Cyber Utopian existence. We buy our food, plan our entertainment, buy cloths and talk to our friends over the internet.
I think this has bred a kind of hyper-capitalism in us…if you want something, you just click and it gets delivered to your door.
We’ve lost contact with the environmental and personal cost of this (virtual) reality that we now demand. Increasingly, we are becoming slaves in a First World Global Engine that just grinds up the workers. These workers then go home and lust over a big plasma screen – they go online and *click*, they buy it….and thus the problem is perpetuated by those who are enslaved to it.

So this is freedom…?”

S] Both yourself and DestroyX maintain a very good relationship with your fans, your online forums act as a springboard for young musicians and artists, how much has the work of your fans inspired you in the past and can you give specific examples – any paintings, clothes, songs produced by your fans?

We are definitely inspired by the huge amount of art/music/fashion/hair being discussed and made! The people on the forum have a very powerful effect on us – they encourage us to keep going.

Through our forum we have realized that Angelspit is just an igniter for the new sound and look that is about to explode. It’s really exciting!

Our friends and fans definitely inspire us with their personal experiences, the hardships they experience because they choose to express themselves differently. We share and relate to their frustration.”

S] You often produce “blipverts” which document the song writing process and other aspects of production – why did you begin doing this (any other reason apart from the fans?) and what do you hope to achieve in the future with the idea?

ZooG: “It was mostly for our fans. We get so many people asking for advice on how to make music and art. The Blipverts are a great way to show people how we do it – plus, Blipverts offer a form of encouragement to artists and musicians who are “stuck in a rut” or suffering writer’s block or we recently published an online diary filmed during the making of Blood Death Ivory. In this diary we are honest and open about the writing experience of the album. Some people felt that we were a little to honest – but the point was not to exult ourselves as super beings who create art without effort, rather show people that we find it extremely hard creating art. It is our hope that people find encouragement in these diaries.

Forge ahead, make your art!”

S] Which was your best Northern gig/moment in England from your tour in 2007, can you remember any specific highlights from your dates in Newcastle, Sheffield, Leeds or Manchester?

ZooG: “Every gig was INSANE!!! Everyone dressed up. It was just mad beyond words.

Newcastle, Sheffield, Leeds, Manchester, Newport and London we also great fun. English are so brilliant to play to – they’re loud, raucous and very friendly. Manchester is amazing. Leeds was just awesome…god, do I have to pick one??!!”

S] Your direction has changed from the “punky” sound of ‘Krankhaus’ to the arguably more “metal” driven ‘Blood, Death Ivory’ what can we expect from your next album, will your fans be involved in the creative process in any way now that you have complete creative freedom?

ZooG: “We are well into writing the next album. We just need to figure out how to release it – either a series on EPs or a one big album…we’re still not sure.

We are now focusing on follow-up material to Blood Death Ivory. We want to do some remixes and expand on the concept behind it. We’d love to get fans involved with remixes, but we are waiting for clearance from our previous record label…it’s a bit of a pain in the ass.

The new material is viscous. It’s interesting how Berlin influenced us with Blood Death Ivory – it’s sleek, sophisticated and intricate…just like Berlin. We wanted it to be simple “Industrial Punk” like Nurse Grenade…but it ended up far more complex and sweetly evil.
The new material is all being written back in Sydney, so it’s got that rough and aggressive sound that only Sydney can inspire. It’s similar to Krankhaus, but a LOT meaner!

We made a conscience effort in Blood Death Ivory and Krankhaus to push ourselves with the music. We like to write fast and aggressive music (155BPM and faster), but in the last two albums we decided to experiment with slower tempos (90BPM to 140BPM). The new material cuts loose. It’s all fast and clangy…it’s great fun!! We’re so excited about releasing it – but that won’t be for a while.”

S] You often talk about your musical/visual influences, can you recall a time where someone has contacted you and your music/style has really inspired them to make a difference in their lives – what is the most positive comment about your music or art that you have had – how did it make you feel?

ZooG: “We have been fortunate enough to have inspired people. It’s such an honor to know that our music has got someone though a very difficult patch of life, or helped them recover from a break-up, or got them though high school.

It inspires us to keep going! It inspires our music to stay “real”. It reminds us that we are a part of a community and people listen to our lyrics – so we put extra effort into them.”

S] What keeps yourself and DestroyX interested and inspired in the Industrial scene now in 2008 – what is the best thing about it?

ZooG: “Increasingly, there is a HUGE movement that is pushing away from the formula of EBM and regular “Darkwave” fashion. It is fuelled by a similar anger that fired the original punk movement. We’ve been hearing more fiery and living music like BAAL, Experiment Haywire and Left Spine Down. Plus there is a fantastic push from music that is more burlesque inspired, like The Tenth Stage.

We are a part of a mighty Alternative Culture. It is the duty of all of us to push the envelope, be expressive and be a part of the evolution of art.”

S] Your forum has sections for design, hair, clothes etc? How do these aspects play a part in the FUTURE of Angelspit? Will there be a clothing line for example?

ZooG: “It’s no secret that we love to design clothes and random merch! It would be awesome to start a fashion label. Destroyx is an amazing designer, so it will probably happen…!”

S] We wonder how you live from day to day…can you outline your daily routine on say, a Monday for those who may need a little inspiration to get up in the morning? – Like a written blipvert! We imagine you get up at the crack of dawn, or that you just don’t sleep?

ZooG: “I’m up at 7am. I go for a run, have a coffee (a VERY strong Mocha) and then get into it. I work solid until midnight, then collapse from exhaustion. I do this at least six days a week.

Monday:  I work for the Surgeon-X crew. I help them with accounts and getting out orders.

Tuesday: MUSIC!!!! I go into Newtown (our favorite suburb) and sit in a café and work on lyrics until noon, then head back to the studio and work on music.

Wednesday: Updating the website and doing boring band management stuff (We don’t have a manager!)

Thursday: I’m back over at Surgeon-X’s warehouse. Helping with orders and making Horror Hawks. We also do screen printing and stencil making – its awesome fun!

Saturday: Maybe go to an art gallery, see a movie or see a band. We always carry note-pads with us to keep track of any cool ideas that come up.

Most of our creating happens away from the computer. Ideas for clothes, music, lyrics, concepts…it can hit us at any time so we always carry little note pads.

Our hands are often covered in paint, we try and work away from the computer as often as possible. To us, heaven is a bland note pad, a nice pen, spray paint and a stencil.”

S] How will Angelspit be spending the rest of 2008, and what are some confirmed plans for early 2009?

ZooG: “We’re working on new material and remixes. There are some very cool plans for 2009, but we’ll let you know when they’re confirmed.

We are DYING to get back to England, plus do the USA and Europe!!”

S] We were also wondering, given your credible knowledge and skills, what your background(s) were both musically and professionally? I.E: What kinds of projects came before Angelspit and do you ever wish you could return to them?

ZooG: “I have a degree in Contemporary Music. I was a University Lecturer in MIDI/Sound Design when I was 22. I worked in Sound Design for major computer games for a few years (Microsoft and EA Sports). I’ve been in more Industrial bands than I can remember. I have absolutely NO DESIRE to get back into games.”

Thanks to ANGELSPIT and YOU, for reading!